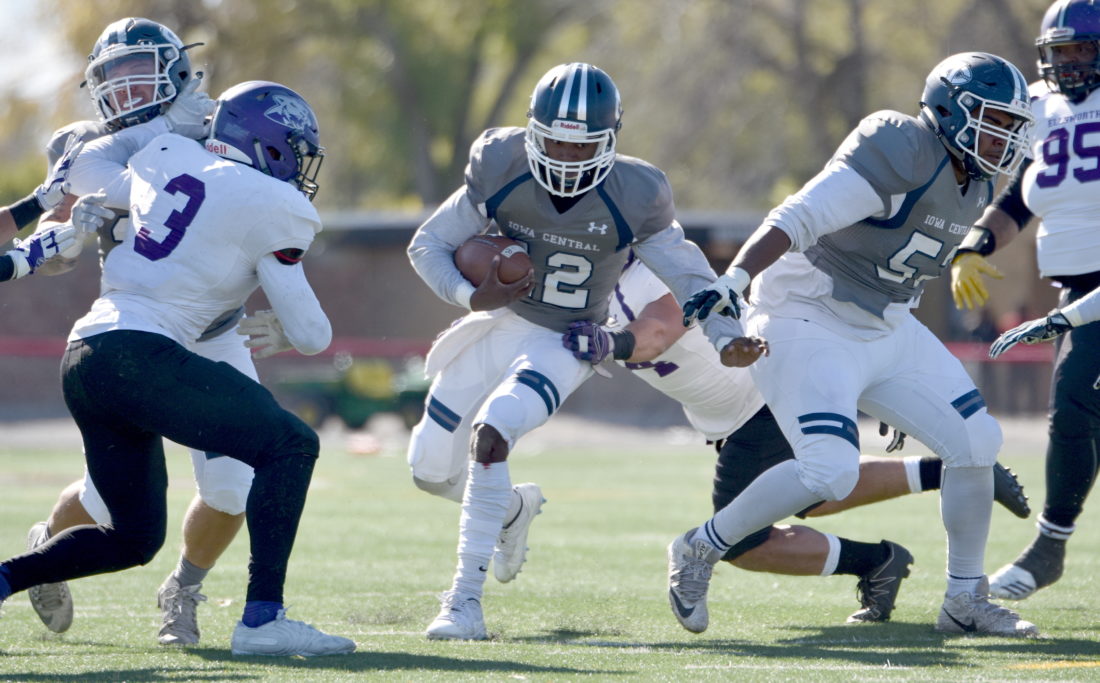 With the chance to gain bowl eligibility on the line, Cuvelier and the Triton defense pitched a shutout, securing a 28-0 victory on a windy afternoon inside Dodger Stadium.

Iowa Central (4-4 overall, 1-1 in league) can now be selected for December’s Graphic Edge Bowl as the league runner-up to third-ranked Iowa Western. The win was also the first for Jesse Montalto against his former school in the Panthers (1-7, 0-2).

“For what Coach Montalto has done for us, we owed him this one,” Cuvelier said. “Knowing how important this game was to Ellsworth, I couldn’t be happier that we came out on top.”

The Panthers had won three in a row in the series, with Montalto serving as coach for all of those. He went 3-1 in his four-year career at Ellsworth, including four consecutive bowl wins.

“We knew they would come in and bring everything they had at us,” Montalto said. “This was their Super Bowl. We knew how good Ellsworth was because they’ve had just a few bad breaks this year.

“Our kids came in and took care of business by playing smart football and limiting the turnovers.”

Justin Blake, who had over 500 total yards and seven touchdowns a week ago, ran for 105 yards and scored three times. He also had 90 yards passing.

Blake broke a scoreless tie with an 11-yard run in the second quarter to complete a 12-play, 70-yard drive. He added an 18-yard TD scamper later in the quarter, scoring for a third time in the fourth.

“We had to be a little more safe with our offense, but Blake made plays with his feet when we needed him to,” Montalto said. “We knew our defense could shut them down, so we relied on them and kept it conservative.”

The Triton defense, led by co-defensive coordinators Jeremy Conley and Don Jones, held Ellsworth to minus-24 net yards rushing and just 203 total. Daquan Cross recovered a fumble and returned it to the end zone, adding a sack, with Terrion Williams recording two sacks.

Jarran Barber and Drew Boffeli also had fumble recoveries, with Lamont Bishop picking off a pass.

“The defensive line played unbelievable,” Cuvelier said. “All the praise in the world goes to the men up front for making our jobs as linebackers easy. They do all the dirty work.”

Joshua Shim and Byron Jarrett combined to throw for 181 yards to lead the Panthers, with Jordan Foster hauling in 11 receptions for 114 yards.

Iowa Central now heads back to Kansas to face Independence with a special 9 p.m. kickoff set for next Saturday. Ellsworth is also on the road against No. 13 Butler.