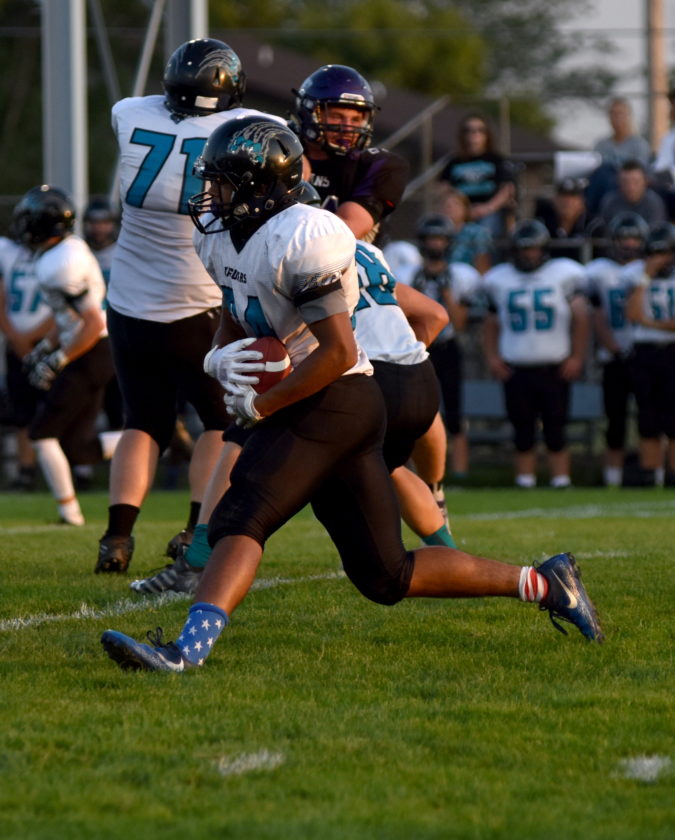 GOWRIE — Southeast Valley is headed back to the state playoffs.

This will be Southeast Valley’s fourth playoff appearance in the last five seasons (2014-2016) and ninth in the last 11, including Prairie Valley.

“This is special,” said Southeast Valley head coach Mike Swieter. “This is a great group of seniors and a special group.

“I couldn’t be more proud of this team and I almost teared up before the game, knowing it could be my last pregrame speech with this group. This was big for the program, for the school and the community.”

Two of the top two offenses in Class 2A went toe-to-toe for 48 minutes, exchanging touchdowns, as their were five lead changes in the contest.

For the third time this season, senior tailback Kyler Fisher set the single-game rushing record, running 294 yards on 33 carries. It was also his fourth straight 200-yard game. Fisher has 1,040 yards and 13 touchdowns in the last four games.

“We put it in his hands and he took care of business,” Swieter said of Fisher. “We had so many big plays and he had some key ones along the way and he did a great job.”

“Our whole team has been putting in so much work,” Fisher said. “We were just going crazy in the locker room.”

A packed house witnessed the triumph as the Jaguars knocked off a Top-5 team for the second time this season.

“That’s who we do it for (fans),” Fisher said. “We do this for past alumni to show them that its for them.

“It’s special for them and you seen it with how big the crowd was tonight.”

The biggest play of the contest may have been right before the end of the first half. Algona scored to go up 28-20 with 39 seconds left in the half.

The Jaguars were looking to run out the clock, but then adjusted that decision. Fisher broke free for a 58-yard touchdown (he also scored from 22 and 10) and the two-point conversion sent SEV into the break in a 28-28 tie.

“We were trying to run out the clock,” Fisher said. “I told coach I wanted the ball. I went for 10 yards and he asked me again and I said Yes sir — I want it.

“The offensive line made a big hole and I went all the way down the field. They (offensive line) are everything. I’ve said before, we may not be the biggest, but they come up big. They helped me so much with so many open lanes. Without them I wouldn’t have close to these numbers.”

Toward the end of the contest, Algona fumbled the ball and the Jaguars ran out the clock.

“We got the fumble recovery and put it in Kyler’s hands,” Swieter said. “We ran out the clock.

“We took care of business down the stretch.”

Fisher may have had the most yards for the Jaguars, but junior quarterback Hunter Kruse and senior Nyles Johnson came up huge.

“Hunter and Nyles had huge games,” Swieter said. “Chase had a big catch.”

“This was the best crowd I’ve ever seen here and they traveled well. We’ve had great fan support from all of our community.”

Kruse was 6-for-14 passing for 148 yards and three touchdowns. Johnson caught four balls for 132 yards and touchdowns of 49 and 19 yards. Zach Graves caught a four-yard score.

“He came up clutch,” Fisher said. “He had some great passes when we needed them. He is going to be som better next year and I’m so excited for him.”

Wyatt Wegener scored three touchdowns for the Bulldogs. Wegener ran in from 31 and 35 yards.

Quarterback Matt Grein threw two touchdown passes. He connected with Wegener from 20 yards out and Jacob Durant from 29. Grein had a five-yard run and Durant scored from one yard.