Hawks no match for Tritons 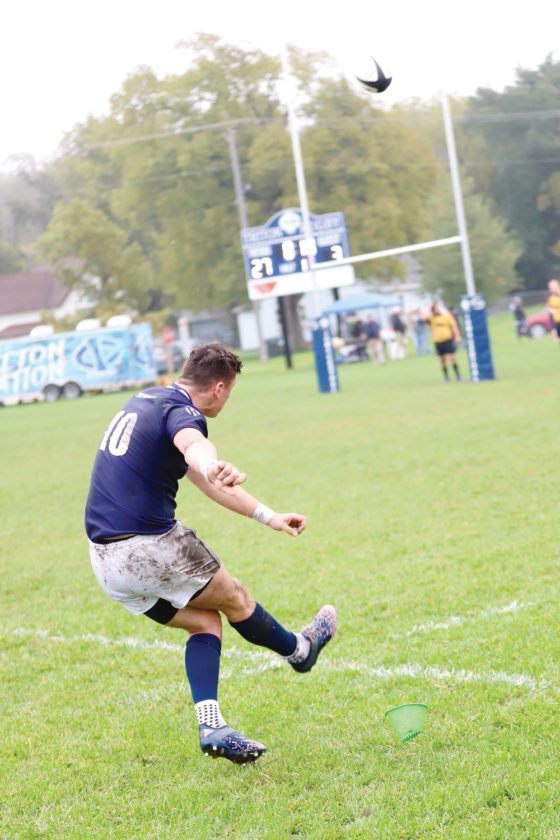 Photo by Paul DeCoursey With the new scoreboard in the background, Rhys Smith follows through on a penalty kick during Sunday’s Iowa Central match against Iowa.

Sunday signified a turning point for Iowa Central rugby in more ways than one.

Yes, the Tritons routed the University of Iowa, 60-3, in a resounding victory that raised eyebrows given the Hawkeyes’ name and brand.

ICCC head coach Brent Nelson was pleased with the performance, of course, but wins and losses aren’t as important as the tangible gains his program is showing both on and off the pitch in recent weeks.

Thanks to a new scoreboard — donated by Fort Dodge’s Woodruff Construction — and a schedule filled with unrivaled challenges, Nelson sees the Tritons making the strides that “legitimizes and solidifies us as a proper rugby contender.”

“It’s just great to see it all coming together,” Nelson said. “We were off to a slow start record-wise so far (this season), but I wasn’t worried about that at all. I always say, ‘we’re not losing, we’re learning.’

“We’ve been taking on some of the best teams in the entire country, so even with a 1-3 record (before Sunday), I knew we were headed in the right direction. We were upping the level of competition and getting better, which is what you should do. You don’t want a false sense of security based on a record you haven’t really earned.”

Iowa Central lit up its new scoreboard from any and all directions against the Hawkeyes. Michael Wildin recorded a hat trick, and the Tritons made good on six other tries: by Isaiah Davies Faleuka, Malik Thomas, Viance Vano, Kelvin Clark, Ezra Ulberg, Gareth Sanders Crook.

Rhys Smith was 6 of 9 on conversion kicks and 1-for-2 on penalty kicks.

“Mike is just an absolute burner; he’s the fastest guy on the field everywhere we go,” Nelson said. “We were very balanced (on Sunday) and played a lot of hard-nosed defense. Everyone was contributing and flying to the ball.

“There may have been a little bit of frustration (in losing three of the year’s first four matches), but I’ve encouraged everyone to not get caught up in what we accomplished (in 2018, with the national championship), and instead, focus on creating their own identity. I think we started to really see that (against Iowa).”

“The generosity of Woodruff Construction has been amazing,” Nelson said. “We already had a nice irrigated pitch that Toby Beneke does a terrific job (maintaining). But the big, bright scoreboard is an incredible addition.

“This is such a huge deal for us; we can’t thank them enough.”

The Tritons return to action at Arkansas State this Saturday. Iowa Central is then off a week before welcoming Lindenwood — the third-ranked squad in Div. I-A — to its field on Oct. 27.