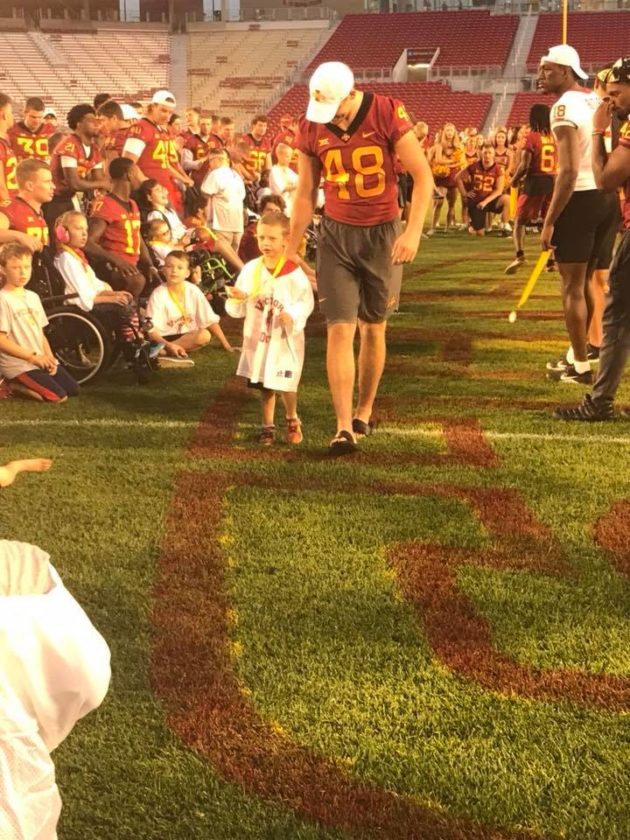 AMES — For all the good that Matt Campbell has already accomplished on the field as Iowa State’s head football coach, his contributions away from the game are even more important to the Gambill family.

The family found out about the event and signed Brecken up. He was one of 60 kids selected to participate this year. Campbell, who also was involved with it during his time at Toledo, has organized the event each of his three seasons at Iowa State.

“I can’t say enough Matt Campbell,” Amber Gambill said. “He personally welcomed each family as they arrived, gave them a ‘pregame’ talk before and gave each kid a pep talk before they lined up with the team to score their touchdown.

“He was so positive and made sure everyone had an amazing experience. Matt Campbell truly has something really special going on at Iowa State.”

“He had an amazing experience,” Amber said. “He tried each of the different activities and the football players made sure he was having fun. I don’t think there was anything that Brecken didn’t love.

“Being able to tackle the big linemen, try on the gear and scoring a touchdown were definitely highlights for Brecken.”

Brecken, who turned six years old in July, said he now wants to be “big and strong” like the football players and found himself repeating the slogan for the Cyclones, “a storm is coming.”

“One of the players was making the cyclone warning sound that they do during games and of course Brecken was all about that,” Amber said. “He would do that and then say ‘a storm is coming’ and he had everyone laughing. It was hard to tell who was enjoying the night more between the players and the kids.”

“For me, walking through the tunnel and on to the field hearing Brecken’s name announced was pretty emotional,” Amber said. “As a parent, you have hopes and dreams for your kids. When you get a diagnosis, some of those hopes or dreams are taken away.

“Seeing Brecken score a touchdown in a college stadium with the band and all, that was one of those dream-come-true moments. And for Brecken, and all of the kids out there, they were stars for a night.”

Victory Day events have been held at campuses in Iowa, Michigan, Ohio, Kentucky, Indiana, Maryland, Minnesota and New Jersey. Children with special needs are paired up with a football player as their friend and mentor for the day.

“We are so thankful for the experience that the Iowa State football team gave to us,” Amber said. “It was a night we won’t soon forget.”