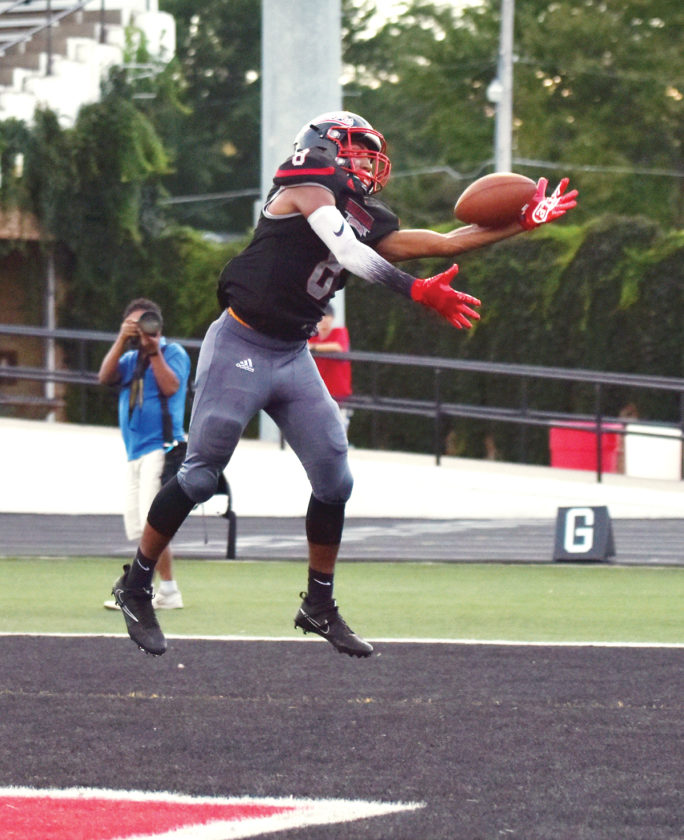 Drake Miller and Tysen Kershaw shared a laugh when talking about just how far back their friendship actually goes.

Their time together on a football field may still be relatively new to most, but truth betold, this connection dates back over a decade. And in Fort Dodge’s 52-24 victory over Ames on Friday, the tandem fittingly entered the school record books together.

Miller threw for a program-best 481 yards and Kershaw shattered the FDSH single-game receiving record with 274 yards as the Dodgers shredded the Little Cyclones’ defense for the third consecutive year, improving to 2-0 on the young season in their home debut.

“We were what, six or seven (years old)?” the 6-foot-3 Kershaw smiled as he stood next to Miller in the postgame locker room.

“Yellow Jackets and Heat,” Miller responded, talking about their early travel teams on the diamond and the hardwood, respectively.

“We’ve always been friends, going all the way back,” Kershaw added. “We’ve put in a lot of time getting better and establishing (an unspoken communication) on the (football) field. Sometimes we just have to look at each other for a split second. And Drake knows what to do and where to put it.”

Miller — a senior — found Kershaw — a junior — 13 different times on a night when Fort Dodge racked up 604 yards of total offense. Meanwhile, Brycen Bell — a classmate of Kershaw’s — caught five passes for 144 yards and three scores, as the Dodgers defeated Ames for the sixth time in the rivalry’s last eight meetings.

“People asked how we would replace (career receiving leader) Trey (Mosley) and Tyrnan (Lara) after (both graduated),” Miller said. “But I’ve known about these juniors coming up for a while, and we’re really building a good chemistry together. There are so many playmakers: Ty, Brycen, Russell (Potratz), Nick (Bice).

“Of course we miss Trey and Tyrnan, but (the passing game) is coming along great thanks to them. Plus, Petey (senior Jace Peterson) does so many little things that make us better, even if they don’t show up (in the statistics). He had some huge blocks (Friday). I’m just really lucky to be surrounded by so much talent.”

Early 7-0 and 10-7 deficits quickly became erased during an explosive second quarter, which saw Miller toss four TD passes. By halftime, the left-hander had accumulated 302 yards through the air, finding Kershaw for 140 and Bell for 125. FDSH led at that point, 35-17, and never looked back.

Even though the Little Cyclones (0-2) did burn the Dodgers on three long pass plays — two went for scores of over 50 yards, and another covered 77 yards of real estate — the Fort Dodge defense forced three turnovers and held Ames to only 41 yards of rushing. The visitors didn’t register a single point in the final 22-plus minutes of regulation after pulling within 35-24, and managed only 99 yards total in the second half.

“Other than the three big plays we gave up, the defense did a great job,” FDSH head coach Matt Miller said. “Drake and Tysen took what the defense gave them; they bottled up our run game, so we had some opportunities (with their secondary) that we took advantage of. Tysen and Brycen made some spectacular catches.

“Brycen had a huge night. I appreciate so much a kid like Brycen or (lineman) Bryson (Opande), who are playing both ways and giving the kind of complete effort that we really want to hang our hat on as a program.”

In his first varsity action on special teams, sophomore speedster Tyler Schreier returned a punt 51 yards for a touchdown to break Ames’ spirit midway through the third period. Fort Dodge added a TD on a hook-and-lateral from Peterson to Dayson Clayton late in the same quarter, and senior Ben Nebel booted a 24-yard field goal for the last points in the opening minute of the fourth.

Miller bested his own single-game record, established a year ago against Ames (439 yards). In three career contests versus the Little Cyclones, Miller is 85-for-117 with 1,265 yards and 15 TDs through the air.

“We take a great deal of pride in our (recent success against the Little Cyclones),” Matt Miller said. “We have a lot of respect for their program. They’ve been a legitimate playoff contender year in and year out for a long time.

“Given (the 14-game losing streak vs. Ames from 1995 through 2008), to see us come this far against them is something we should be very proud of. I can’t thank my coordinators (Nik Moser and Blake Utley) and the rest of my staff enough. No one works harder than they do.”

Friday’s win could prove costly for the Dodgers, who didn’t escape unscathed. Senior lineman Logan Finowski, a three-year starter, injured his ankle twice during the victory. Clayton re-aggrivated a shoulder injury he had suffered during the summer on the hook-and-lateral play, and did not return. Senior nose guard Carson Spiker also left with an ankle issue.

“We got banged up,” Miller said. “We took a lot of hits. Ames has a very talented defensive front, and a lot of really good athletes on the field. I know the score doesn’t indicate it, but this was a physical dogfight and we have to get healed up for the Indianola trip.”

Kershaw now has 19 catches for 420 yards in the first two weeks of the season alone. He credits working with cousin Reid Branderhorst — a former FDSH standout — in Texas over the summer, as well as spending time on the TCU campus for his early breakout.

“I just had to get more aggressive and finish runs (physically), and I also had to get my mind in the right place to be more consistent,” Kershaw said. “Being with Reid and working out in Texas really pushed me and showed me what I needed to do to get better.”

As the Dodgers were celebrating afterward, Drake Miller couldn’t help but think about the absence of the school’s biggest supporter.

“It was strange not having Dodger Denny (Olson, who passed away in July at the age of 65) here,” Miller said. “He would always greet us with a high-five as we were leaving the field, and he’d be there for us no matter what — win or lose.

“I’d like to think he was watching over us (Friday). This one was for him.”