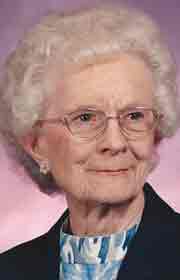 MANSON — Marie Janssen Van Roekel died peacefully in Phoenix, Arizona, on August 19, 2018, with her family at her side. She was born to Henry and Frances Janssen on May 4, 1914, in a farmhouse in rural Iowa. She was preceded in death by her husband Bernard Van Roekel, who died in 1982, her parents, and five of her seven siblings. She is survived by her children, Fran Collmann (Larry), Ruth McGregor (Bob), Joyce Zehr (Marvin Burke), Dennis Van Roekel (Julie), and Karen Kibler (Tom Grimes); two sisters, Dorothy Hanson and Leona Lancaster; 20 grandchildren, 32 great-grandchildren, 6 great-great grandchildren, and numerous cousins, nephews and nieces.

Marie and Bernard Van Roekel moved to Manson, Iowa in 1955. Marie taught second grade at the Manson Community Elementary School for twenty-five years, where she touched the lives of hundreds of students, in whom she inspired a love of learning. Marie supported numerous school activities, both during and after the time her five children attended Manson Community High School. After her retirement in 1982, she moved to Phoenix and continued to help students as a volunteer at the Thomas J. Pappas School for Homeless Children. She also volunteered countless hours through her church, including a commitment to visiting “the elderly” well into her nineties.

Her family and countless friends will remember her deep faith, her unconditional love for family and friends, her indomitable spirit, her sense of humor, her pride in her children, and her unmatched sewing and baking skills.

There will be a visitation at the Larson-Weishaar Funeral Home in Manson from 5 until 7 p.m. on Friday, October 12.