THEIR FIELD OF DREAMS

Flatterys head to Dyersville for a piece of baseball heaven 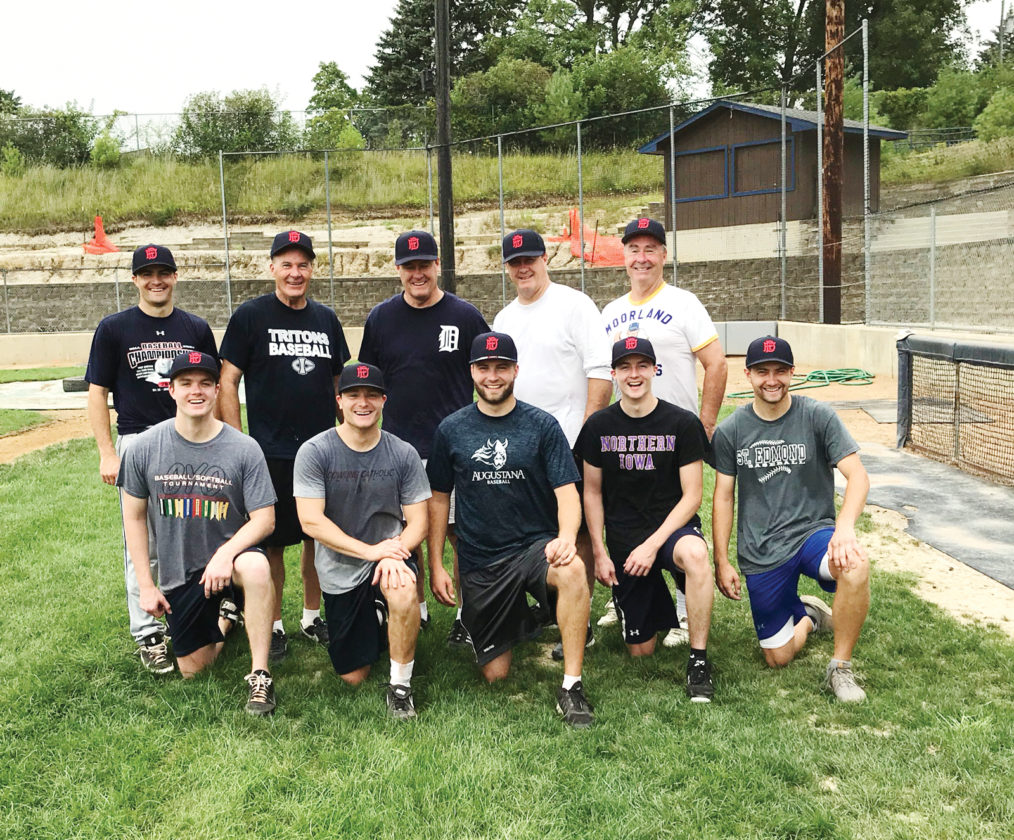 —Submitted photo Ten of the 13 Flatterys headed to the Field of Dreams location to play in an exhibition baseball game as the ‘Fort Dodge Gypsum Eaters’ are shown here at Ed Barbour Field. The family is paying tribute to an old local minor league team from 114 years ago.

There is a poignant — and what I would consider the defining — exchange in the iconic movie “Field of Dreams” where the story’s protagonist, Ray Kinsella, gets asked by his resurrected father, John, if Iowa is heaven.

Ray famously answers for the second time in the film, “it’s Iowa.”

John then responds, “Iowa? I could have sworn this was heaven.”

Seizing the second chance to connect with his dad, Ray innocently says, “is there a heaven?”

Ray peers over at his wife and daughter smiling and laughing on the porch, then observes with idyllic perspective in the film’s most powerful line, “maybe this is heaven.”

Tim Flattery figures he’ll experience a similar moment of clarity on Tuesday, when he and 12 of his relatives bring the Fort Dodge Gypsum Eaters minor league baseball team back to life for the first time in over a century. An exhibition game, between the Gypsum Eaters and a travelling team from the United Kingdom and Ireland Baseball Federation, will take place at — you guessed it — the Field of Dreams, located just outside of Dyersville.

This discussion all began well over a year ago, when Tim’s brother, Neil, and cousin, Jon, started asking around about a Class D minor league baseball franchise from Fort Dodge that played right after the turn of the 20th century.

“We all started digging into (the history of the team) to find out more about it,” said Tim, a 2004 St. Edmond High School graduate. “And then (family friend) Brendan Gargano, who is kind of our resident history buff for (the popular Moonlight Graham Show podcast) kept after it and came up with a lot more information, including photos from old newspapers.

“During state wrestling (this past February), I remember walking through downtown Des Moines, just filled with Fort Dodge pride after the Dodger wrestling team won the state championship. I was at a custom men’s boutique store, where I saw some Des Moines Demons hats for sale (an old minor league squad from the 1940’s and 50’s). I was talking to the owner, and I thought, ‘we could do something like this for the Gypsum Eaters.’ Bring some of our area’s rich baseball history back to life, and showcase Fort Dodge in a positive light.”

The team had been born again, so to speak, but the specifics of the when and the where didn’t materialize until recently. Tim randomly noticed this past spring on Twitter that the Buccaneers travel team was planning a visit to the Field of Dreams location, and they were looking for an opponent.

“They’re a bunch of guys who are just in love with the game. Baseball fanatics,” Tim said. “This is a bucket-list trip for them. They play in men’s leagues and organized leagues in Great Britain and Ireland.”

The Gypsum Eaters had a game. Now, they needed to fill out a roster.

It didn’t take long for Tim’s dad, uncles, brothers and cousins to answer the call.

The Flattery baker’s dozen — Mike, Terry, Dan and Dave, along with Tim, Andy, Joey, Patrick, Jon, Neil, David, Robert and Colin — will be fitted in full Gypsum Eater attire for a 6 p.m. first pitch. Arguably the most accomplished family in the history of both Iowa high school baseball and athletics in general, the Flatterys are of course taking this road trip seriously — but embracing the opportunity to simply be together on the same diamond more.

“You know, it’s going to be really cool: going to the Field of Dreams, paying tribute to the Gypsum Eaters, facing a team from overseas … but it will all pale in comparison to just being there in uniform with my dad, my brothers, my uncles and my cousins. I can only imagine what that will be like.

“We were all together at Ed Barbour Field (on the Iowa Central campus) over the weekend, practicing and having fun. And I remember at one point thinking to myself, ‘if this is all we did, it would be enough.”

And therein lies the simplicity and magic of visiting the Field of Dreams location, even to this day — close to 30 years after the movie was released.

“It’s why we still go there, and a big reason why we have our podcast (as a tribute to the doctor from the movie who gave up baseball to practice medicine),” Tim said. “It’s a place to make memories together. The field is about (paying tribute to) the movie, but it’s also about bringing dreams to life through family and baseball. And that’s what we want to showcase (on Tuesday).”

Tim referenced my favorite scene during a recent podcast, reminding his listeners of the movie’s bigger picture. It’s a theme the Flattery family plans to embrace under the bright lights of Iowa’s most famous field.

“It’s not about the ghost players. It never was,” Tim said. “It’s about showing the people you love that you love them while you still can.”