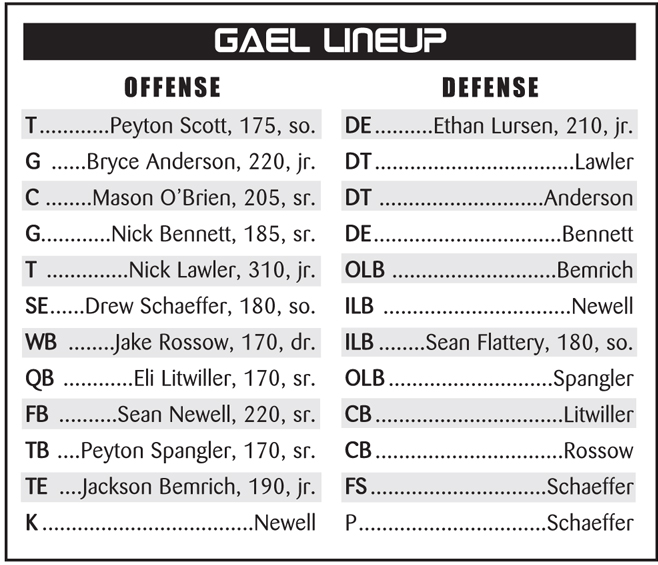 ARMSTRONG — The St. Edmond football team hits the road for the first time this season as they take on North Union here Friday night.

“It’s a learning process,” SEHS head coach Matt Dillon said. “We’ve got a lot of guys playing that didn’t last year, but I like the way they responded in practice. We ran into a tough Panorama football team last week and North Union is coming off a tough loss of its own.”

In 2017, St. Edmond earned a 12-0 victory over North Union here as Isaac Lursen and Cade Naughton both scored touchdowns. The Gaels out-gained the Warriors, 401-146 that night and forced two turnovers.

Eli Litwiller, who stepped in for Andrew Gibb in that game when Gibb was injured, completed 4 of 7 passes for 129 yards. Jake Rossow had a 70-yard reception and Jackson Bemrich had two catches for 52 yards. All three return for St. Edmond and start on both sides of the ball.

Peyton Spangler ran for 67 yards in the win and is also back for the Gaels. Spangler, a senior two-way starter as well, ran for 82 yards to lead SEHS last week.

Sean Newell added 75 yards on the ground and Sean Flattery 59 as St. Edmond ran for 200 yards.

“We had the chance to close the gap (last week) but we let them get a big kickoff and score to make it a three-possession game,” Dillon said. “When you have the chance to do that, you have to take advantage.”

The Gaels forced three turnovers on defense vs. Panorama, including two interceptions by Rossow. Bryce Anderson also recovered a fumble.

North Union’s Isaac Engeman led the team with 70 yards on the ground. Engeman ran for 136 yards and had two completions for another 52 vs. Central Springs, adding two receptions for 35 yards and 10 total tackles to his night.

Elliott Hagebock was 4-for-7 passing for 44 yards and caught a 40-yard touchdown pass. Hagebock, a senior, was the starting quarterback as a sophomore before suffering a leg injury and missing all of last season.

The Warriors travel to MMCRU next week before returning here to play four of their next five at home.