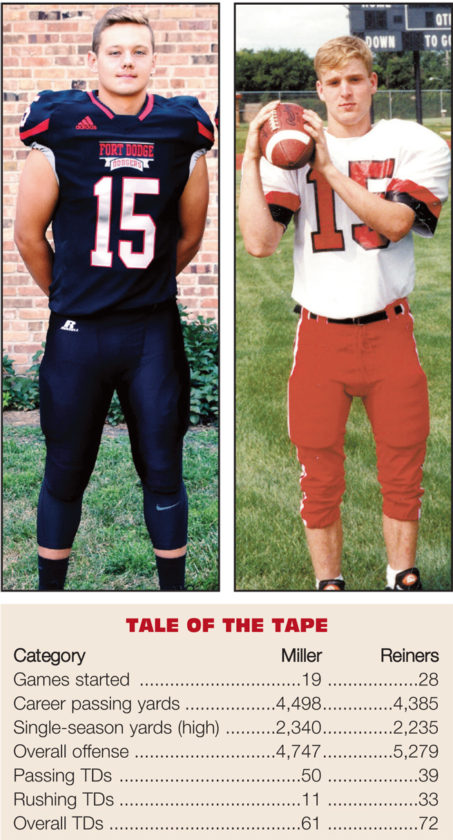 Comparing Drake Miller to Randy Reiners seems only natural these days, given the Dodger senior has been busy rewriting the record books as the most statistically accomplished quarterback in Fort Dodge Senior High football history.

That’s no small feat. Reiners is still, to this day, Dodger royalty. He’s one of the most revered and accomplished athletes in our city’s history, both on paper and in lore.

The brilliance of Reiners on the gridiron always had its due on the school’s passing and touchdown charts. The former University of Iowa signal-caller held the career yardage, single-season yardage, total offense, and both career and single-season touchdown marks for well over 20 years.

Records are made to be broken, though, and Miller is doing so in sweeping fashion. He erased Reiners’ all-time passing number — once thought to be untouchable — last week in Mason City with a methodical 370-yard performance. Reiners threw for 4,385 yards in 28 career starts — over 1,100 ahead of the next best Dodger ever. Miller is now at 4,498 yards, and believe it or not, he’s done so in just 19 starts.

I’ve been asked a lot recently about how Miller measures up side-by-side with Reiners. Randy was a high school teammate and friend of mine, and I’ve kept track of every pass Drake has thrown. I consider myself lucky to have witnessed almost all of their memorable moments in person.

First, the differences. It’s really difficult to draw parallels, given how much the game has changed in the last quarter-century. While their passing numbers are very similar at this particular juncture, the journey has been much different to get here.

Reiners captained a more free-wheeling offense, using his elite athleticism to improvise and entertain in what was, at the time, a very innovative, futuristic attack under head coach Sam Moser.

By early-November of 1994, Fort Dodge was as good as anyone in Iowa. The six-game stretch of football during Reiners’ senior year — when the Dodgers fought back from a 2-3 record to reach the state quarterfinals — is still some of the most impressive work in school history. Only a heartbreaking playoff loss to West Des Moines Dowling at Valley kept FDSH out of the UNI-Dome for the first — and what would still be the only — time ever.

Miller relies more on pinpoint accuracy, both with his mind and his arm. He reads opposing defenses as well as anyone I’ve seen in a Dodger uniform, and does so with a very even-keeled mentality. Miller has never let a bad throw or mistake beat him twice, and he never tries to do more than what’s in front of him.

Reiners was a fierce, clutch competitor. He loved the challenge of taking what was perceived to be an underdog, rag-tag bunch of Fort Dodge players into battle on the gridiron. He exuded the Dodger way.

Miller is all of the above.

Both Reiners and Miller would hate the fact that I’m singling them out in the first place. Quarterbacks tend to draw a lot of media hype and attention, despite the fact that football is the ultimate team game. Reiners truly believed in his fellow Dodgers, knowing it took a strong offensive line and talented skill players to get the job done.

Miller has the same understanding. Like Reiners, it would be very easy for him to embrace the inevitable glory and high-profile nature of the position. Like Reiners, he’d rather focus on crediting and leaning on the guys around him.

I received texts from both Miller and Reiners this past week. First and foremost, Miller credited his teammates and coaches for overtaking Reiners, who he called “a true Dodger legend.”

A few days later, Reiners fittingly sent a congratulatory text to head coach Matt Miller, Drake, and “most of all, his teammates.”

They come from different eras, and their styles reflect the evolution of the game. At their core, though, Reiners and Miller are mirror images of each other — not necessarily as players, but definitely as Dodgers. And something tells me that, 25 years from now if a future FDSH quarterback surpasses Miller, the message from Drake would be the same as it was from Randy: in football, it takes an entire team to produce a record-breaking individual.