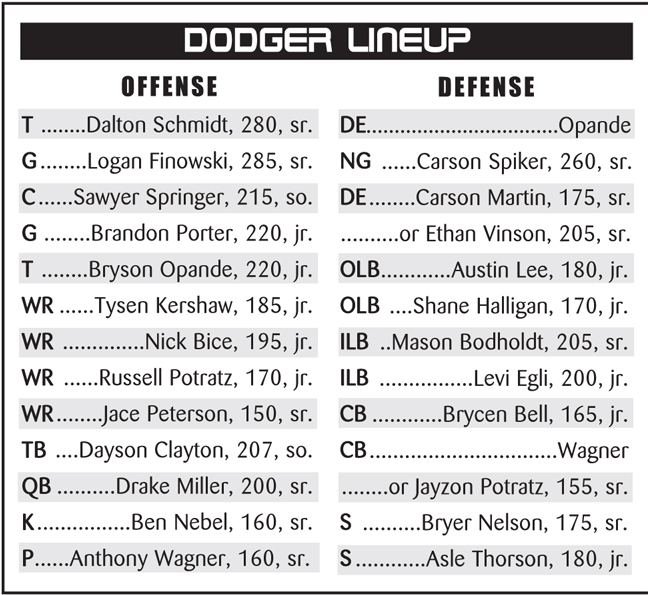 While fans certainly enjoyed the breakneck pace, Miller anticipates a much more traditional matchup on Friday when FDSH and the Little Cyclones meet for the 65th time in a series that dates back over 100 years.

Kickoff is set for 7 p.m. inside Dodger Stadium.

“If there are (114 points) scored again, something has really gone haywire,” Miller laughed. “I think the defense on both sides is a lot better than it was (a year ago). Ames’ strengths seem to be on that side of the ball, especially as they (go through an offensive transition with a new quarterback), and I feel like we’ve improved quite a bit (from last season) there as well.”

The long-time rivals landed on opposite ends of the spectrum in Week 1. While Fort Dodge was wiping out Mason City on the road for the 15th consecutive time, 48-0, the Little Cyclones were being blanked by fifth-ranked Cedar Falls at home, 31-0.

“I’m not reading too much into those scores,” Miller said. “We are facing a well-coached team who will be much more athletic than what we saw (against the Mohawks). They’re very solid along the defensive front, their linebackers are aggressive, and their defensive backs are experienced.

“Cedar Falls is going to do that to a lot of teams. They did that to us a year ago. (University of Iowa linebacker recruit Jack) Campbell was all over the field (last week).”

The Dodgers racked up 524 yards of total offense at Mason City, with senior quarterback Drake Miller throwing for 370 yards and four touchdowns. Miller leapt over former all-stater and Iowa Hawkeye Randy Reiners to become the school’s all-time leader for career passing yardage in the process.

“Dayson ran hard,” Miller said. “Drake made some solid throws, and Russell, Brycen and Nick all did positive things when their number was called.

“I really liked the aggressive nature of Tysen. He didn’t let an early mistake (fumbling while trying to stretch into the end zone) get to him, and had a big game after that. It was great to see him take that next step.”

Miller is hoping that his defense will deliver an encore performance of sorts — at least in terms of effort.

“We got to the ball (against the Mohawks), and when you do that, good things happen,” Miller said. “There’s still a lot we need to get better at, but they showed some promise (allowing only 74 yards of total offense).

“Our focus was really consistent, which was a positive, and I think it’s carried over into this week. We know this will be a step up, and we have to match the intensity and hopefully feed on the energy of the crowd.”

Cooper Downs completed 22 of 47 passes for 175 yards against Cedar Falls, but the Ames ground game was completely swallowed up by the vaunted Tiger attack.

The Little Cyclones lead the all-time series, 33-28-1. After winning 14 in a row from 1995 through 2008, though, Ames fallen to the Dodgers in five of their last seven contests.

The programs first met on the gridiron in 1913.