Tritons drop No. 13 Butler in first game of Montalto era 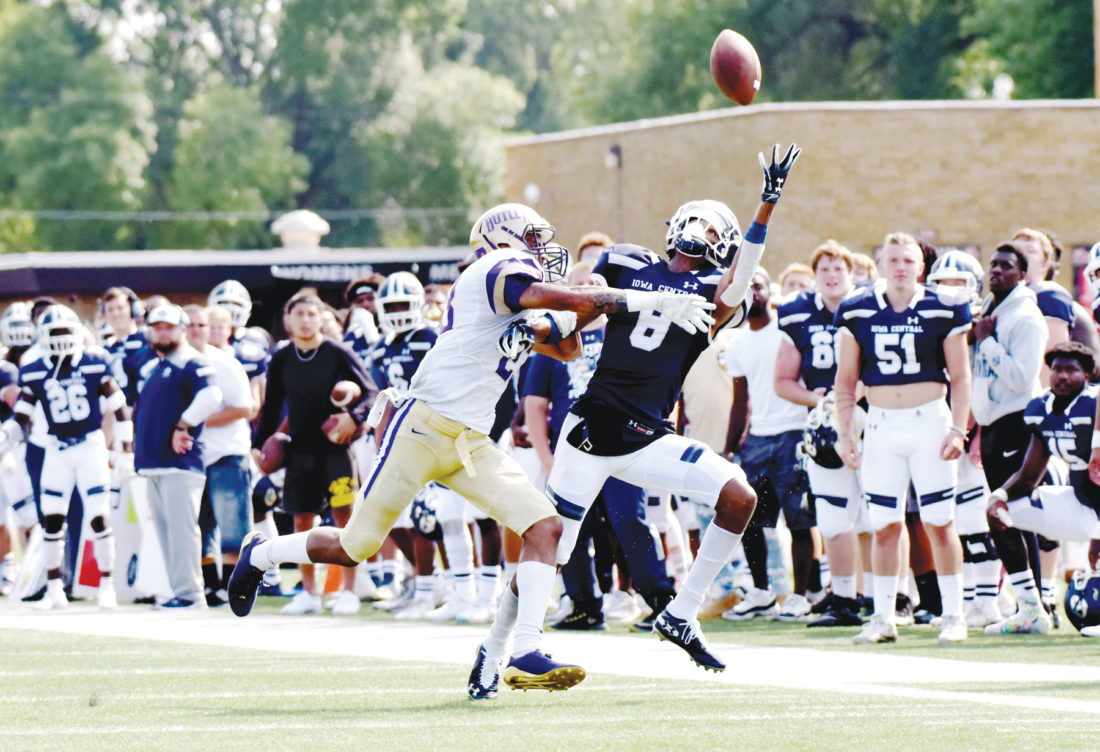 When Jesse Montalto took over the Iowa Central football program in January he asked one thing of his players: to trust the process.

It’s become a typical slogan around sports, but the resulted proved to be successful Saturday as the Tritons upset 13th-ranked Butler inside Dodger Stadium, 26-16.

The win was the first for Montalto as head coach of Iowa Central (1-0 overall) after replacing Kevin Twait, and the first for the program at home since a win over Highland on Oct. 10, 2015.

“All of these kids have bought into everything we have been trying to accomplish since day one,” said Montalto, who went 1-3 against Butler while at Ellsworth. “I am so proud of these guys.”

Montalto and his coaching staff went on a nation-wide search to bring in top-level talent to play for the Tritons. Former University of Central Florida wide receiver Emmanuel Logan-Greene finished with five catches for 112 yards, including the game-clinching score on a 46-yard reception from Blake Dever — himself a transfer from Arkansas State University.

Dever, who was forced to sit out last season after transferring, was 13 of 36 passing for 187 yards with a rushing touchdown. He had started as a true freshman at Savannah State University, an FCS program.

“This feels good,” he said. “From where I was, being ineligible last year, getting back out here on the field is just great. We still have a lot of work to do, but if we stick together and play our game every week, we’ll be good.”

Lamont Bishop, a freshman from Chicago, returned an interception for a third quarter score to give Iowa Central a 19-10, Luke Noonan booted through two field goals and the Tritons had another defensive touchdown taken off the board.

“One of my biggest concerns coming in was how we would battle adversity,” Montalto said. “We had two touchdowns called back, were down at halftime and could have packed our bags. But we rose to the occasion and for that, I’m proud of them.”

Dever and the Tritons were clicking on all cylinders on the opening drive of the game, marching 81 yards over nine plays, including a 52-yard catch-and-run by Greene. That drive ended in six points with Dever hitting paydirt.

Noonan added a 23-yard field goal in the end of the quarter and his second from 28 yards out in the third, but the Tritons had several other drives come up empty.

“The hardest thing to go through is adversity in a game,” Dever said. “Sometimes, I didn’t know what was going through my own head. I had some iffy reads, but as a team, we came together and hung on for the win.”

“We’ve got some dudes out there,” Montalto said. “Our linebacking group is as good as anybody in the country, and Michael Slater is unblockable up front. Our entire defensive line played great, but I was most impressed by our secondary.”

The loss denied Butler its 500th program win all-time, just like Iowa Central did last year when they scored a stunning 7-0 upset in El Dorado, Kan. Trae Self passed for 190 yards, with Grahm Roberts recording 90 yards rushing and 64 more receiving yards on seven receptions to lead the Grizzlies.

The Tritons will now prepare for a meeting with ICCAC foe and second-ranked Iowa Western in Council Bluffs next Saturday. The Reivers topped Coffeyville, 19-6, this past Thursday night.

“We’ll enjoy this one for 24 hours before we focus on the next task at hand,” Montalto said.