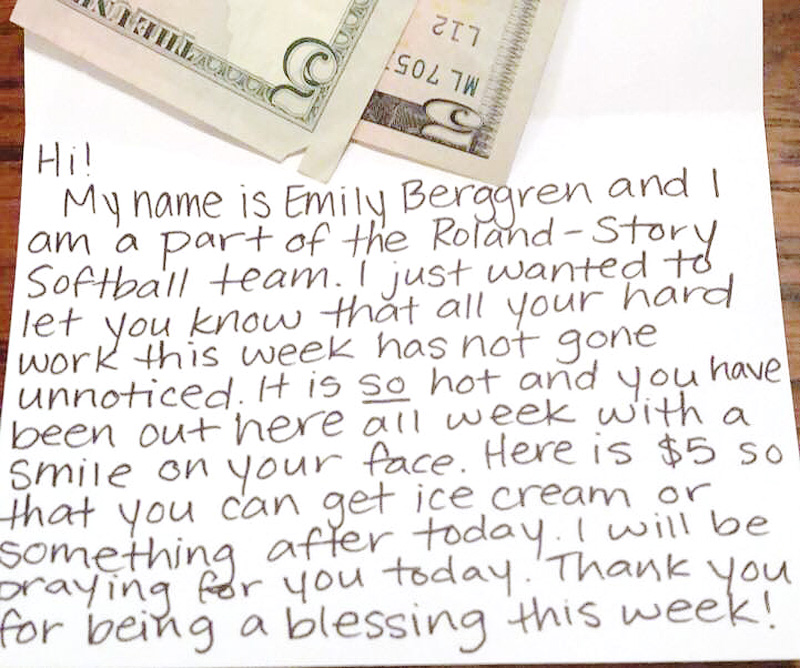 Submitted photo The thank-you note given to Fort Dodge’s Kim Vaughn by Roland-Story player Emily Berggren at the end of state softball week at Rogers Park.

It was the year of perfect weather. Upstart and unranked Des Moines Hoover captured the Class 4A state championship in its first trip to Fort Dodge since 1982. Dominant Davenport Assumption repeated as the 3A queen. So did Pleasant Valley in 5A. Louisa-Muscatine, a first-time qualifier, won the 2A title.

Though there were plenty of memorable moments on the field, I will forever remember last week more for the random acts of kindness happening away from the action.

I need to first say this about the death of Dennis “Dodger Denny” Olson, which happened the day before his beloved Fort Dodge softball squad was scheduled to play in the quarterfinals. The response — both locally and on social media — from Dodgers everywhere was truly inspirational.

It also made me stop and think. Why was Denny so adored? Because of his passion and devotion to FDSH athletics? His loyalty to being the kind of ubiquitous superfan we all recognized? His overall commitment to the Fort Dodge Community School District?

On the surface, I’d say all of the above. But he resonated most with thousands of Dodgers because of what he stood for: positivity, resilience, encouragement and a geniune belief in anything and everything Fort Dodge.

Long story short, Denny was kind-hearted. His enthusiasm became infectious, both for the crowds he rallied and the players he supported unconditionally. Denny didn’t care about the score, or the odds, or even the logic behind the expected outcome of a sporting event. If you were from Fort Dodge, he truly and openly rooted for your success.

There was no agenda. He wasn’t trying to get on the right side of the right people. There were no mixed emotions or complicated feelings.

In today’s cynical and jaded world, that may seem somewhat hokey. I say it’s all the more reason to appreciate such a steadfast attitude — which is why Denny’s life has been so rightfully celebrated.

Along similar lines of generosity, the story of FDCSD teacher Kim Vaughn and a Roland-Story softball player went viral over the weekend for all the right reasons.

Emily Berggren, a sophomore on the R-S squad, left Vaughn an envelope at the Rogers Park passgate on the last day of the tournament. Vaughn had been working there from start to finish, as she does every season.

The envelope included $5 and a note: “Hi! My name is Emily Berggren and I am a part of the Roland-Story softball team. I just wanted to let you know that all your hard work this week has not gone unnoticed. It is so hot and you have been out here all week with a smile on your face. Here is $5 so that you can get ice cream or something after today. I will be praying for you today. Thank you for being a blessing this week!”

Vaughn posted the message on Facebook, saying, “I feel very blessed that this young girl, who didn’t know me except to pass through my gate, gave me such a heartfelt note and a thoughtful gift. Emily, your team may not have won the state title but in my heart you are a champion!”

Again, kindness. Not because Berggren was trying to win someone over, or looking for credit. Simply put, she saw it as the right thing to do.

Kindness isn’t necessarily about the when, the where or the who. It isn’t always predetermined. And it shouldn’t be confused with happiness or other moods, which come and go.

Kindness is an attitude. A state of mind.

We saw the Iowa State football team rally to help the struggling community of Marshalltown in the aftermath of a devastating tornado. There were no press releases ahead of time, or prodding from coaches to get the job done for a “photo opp.” The program’s leaders weren’t driven by attention — they did it because a town needed their help. Nothing more.

That level of concern comes from a sincere and honest — almost innocent — place. Real kindness can create lifetime bonds and unwavering respect. ISU and Marshalltown will always have that connection. So will Fort Dodge and Dodger Denny, or Kim Vaughn and Emily Berggren.

We need kindness now more than ever. It may not always be expected or anticipated, but it can — and should — be greatly appreciated. Pay it forward if kindness blesses you.

Eric Pratt is Sports Editor at The Messenger. He may be reached afternoons and evenings at 1-800-622-6613, by e-mail at sports@messengernews.net, or on Twitter @MessengerSports