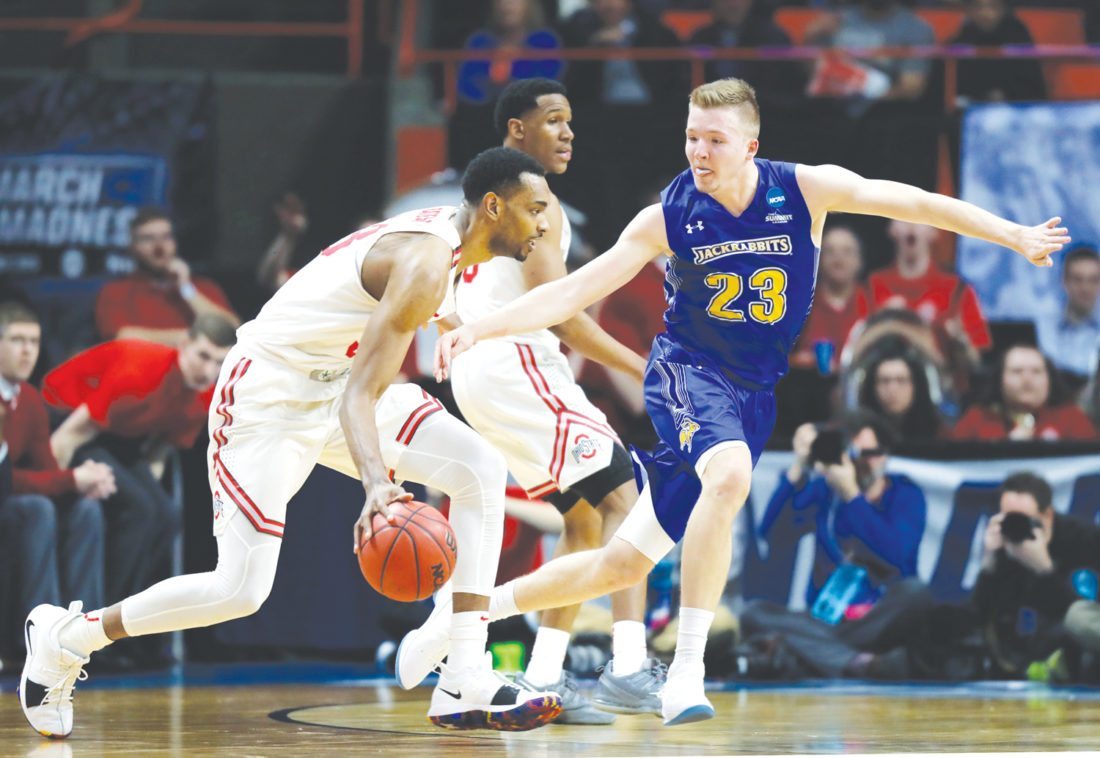 March Madness for years to come will be remembered by the incredible upset provided by UMBC on Friday night in Charlotte.

The University of Maryland-Baltimore County became the first-ever No. 16 seed in the men’s NCAA Tournament to take down a No. 1 when they stunned Virginia.

Head coach Ryan Odom and the Retrievers knocked out the overall top-seed in the field and a team that ended the season No. 1 with matching ACC regular and tournament crowns to the resume.

While Baltimore continues to celebrate the historical accomplishments, basketball fans in towns like Brookings, Des Moines and Waverly were left without their moment in the sun.

But what the South Dakota State men, Grand View women and Wartburg women created at those schools will be just as important as what UMBC did.

Prior to Reed Tellinghuisen’s arrival in Brookings, South Dakota, the Jackrabbits had qualified twice for the NCAA Tournament. Over the next four seasons, SDSU scored three trips to the “Big Dance,” including two near-miss attempts at joining the list of 5-12 upset specials.

The Jackrabbits, who nearly stunned Maryland in 2016, were tripped up by Ohio State in the first round this past Thursday afternoon in Boise, Idaho, 81-73.

Tellinghuisen, a former all-stater at East Sac County, was a starter on all three of those squads. He leaves the school as the career leader in made and attempted 3-pointers, along with games started, helping the Jackrabbits to both the Summit League regular season and tournament titles this past year.

Just one of four seniors on the roster, Tellinghuisen now will watch from a distance as Mike Daum and David Jenkins Jr. look to carry the torch for head coach T.J. Otzelberger, a former assistant at Iowa State.

The group won 96 games over the past four years, making them the winningest class in program history.

Playing in the NAIA Div. I Women’s Championship in Billings, Montana this past Thursday, Grand View nearly duplicated UMBC, as they suffered an 88-82 defeat to No. 1 and top-seeded Shawnee State.

The Vikings were making their debut in the tournament led by St. Edmond graduate Jaci Stumpf and her fellow ex-Iowa Central standout Blair Silliman. Grand View led in the fourth before the Bears staged a furious rally to thwart the upset attempt.

Stumpf scored eight points with a team-high six assists and three rebounds, and Silliman had team-bests in points (16) and rebounds (seven). Both are departing the program along with co-head coach Garey Smith.

Following two seasons of play for the Vikings, Stumpf scored 436 points with 178 rebounds, 171 assists and 50 steals in 66 games. She will graduate early from Grand View.

Silliman, a transfer from UNC-Pembroke, finished her lone season at the school by leading them with 379 points and 75 three-pointers.

Following 31 consecutive wins that left them as just one of four NCAA programs undefeated in the nation regardless of gender or level, Wartburg was denied in its bid to reach the NCAA Div. III championship game Friday night in Rochester, Minn., falling to Bowdoin, 90-62.

The Knights were a senior-dominated team, with two of those soon-to-be graduates being twins Miranda and Megan Murphy. The former North Polk standouts are the daughters of Fort Dodge Senior High grads Mike and Bonnie (Willard) Murphy. Bonnie was part of the last state championship team for the Dodger girls, which cut down the nets in 1985.

Wartburg ended a 14-year drought from the NCAA field by reaching the Final Four in 2016. They also qualified in 2017 before this record-setting run that included a No. 2 ranking.

Miranda Murphy, a four-year starter who earned honorable mention All-American honors by the WBCA this year, scored 1,121 points with 556 rebounds, 183 assists and 96 steals over 111 games played.

The Knights, who went 96-23 over the past four seasons, will now look to a third Murphy sister, true freshman Riley, along with ex-Emmetsburg standout Bailey Naig to keep the tradition alive.

While the dreams of hoisting a national title didn’t come to fruition for South Dakota State, Grand View or Wartburg this season, there is no doubting that all three programs are better off today compared to when Tellinghuisen, Stumpf, Silliman and the Murphy sisters first joined them.

Dana Becker is a sports writer at The Messenger. He may be reached afternoons and evenings at 1-800-622-6613, by e-mail at sports@messengernews.net, or on Twitter @DanaBecker