-Submitted graphic
The back of the new building will have a patio.

-Submitted graphic
A drawing shows what the front of the new Briggs Woods Conference Center will look like when it is completed later in 2018. 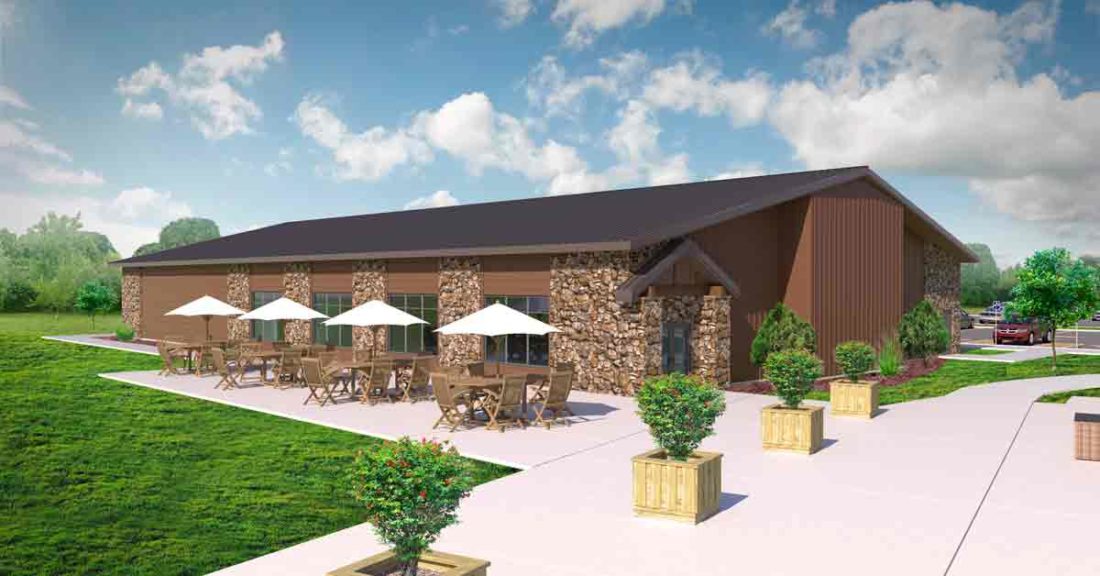 -Submitted graphic
The back of the new building will have a patio.

WEBSTER CITY – The first shovelfuls of soil were turned in a ceremony in October 2017 to mark the beginning of the $2.6 million Briggs Woods Conference Center construction project south of Webster City in Hamilton County.

Members of the Conservation Board, Hamilton County Board of Supervisors and major donors donned hard hats and picked up the gold-tipped shovels to officially break ground.

“This is a joyous occasion as we commemorate the physical beginning of this new facility that will provide residents and out-of-town guests a premiere venue that is equipped to handle corporate and personal events, including conferences, wedding receptions and golf tournaments, to name just a few,” Darcy Swon, development director of Enhance Hamilton County Foundation, said at the time.

Swon said the conference center would be the only facility in the county that would be a full-service venue, providing setup and teardown for events, food preparation, wait staff, onsite event planning and state-of-the-art audiovisual equipment.

“And let’s not forget this scenic view,” she said then, gesturing to the rolling hills of the 18-hole golf course. 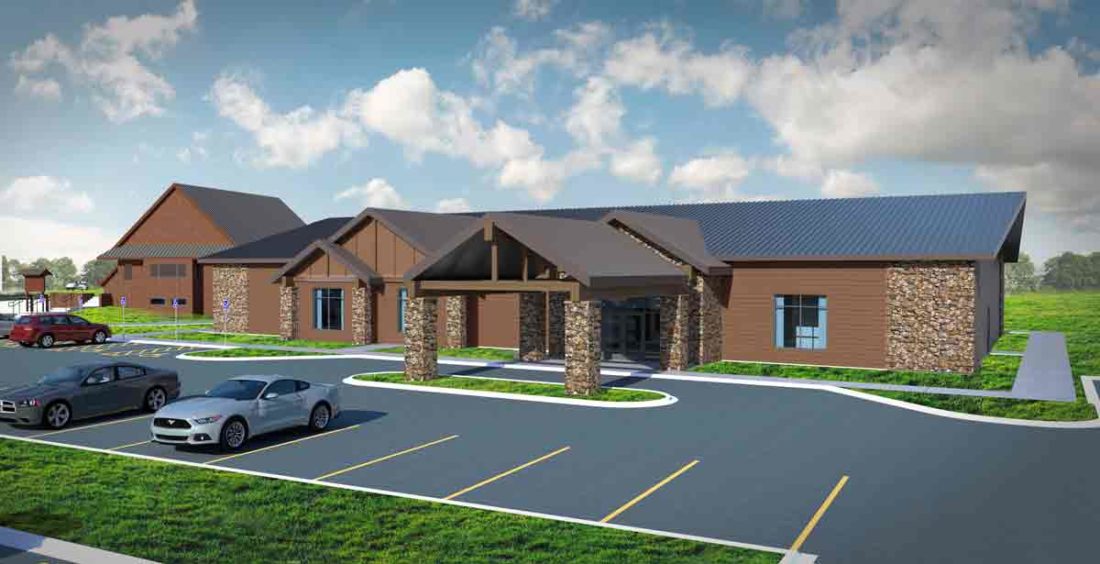 -Submitted graphic
A drawing shows what the front of the new Briggs Woods Conference Center will look like when it is completed later in 2018.

The new conference center will be a 11,250-square-foot single-story building with four conference rooms that can be used independently or combined to seat up to 360 people. The facility will also feature a commercial kitchen.

Swon said her organization was proud to be one of the first groups to support the project with $150,000 in grant funds. She emphasized that fundraising was ongoing to help furnish and equip the new building and to establish long-term sustainability of the project.

The dream of the conference center started more than two years ago.

“For Hamilton County, I think this is a very bold move,” Hamilton County Supervisor Dave Young. “This isn’t something that other counties would have the capacity to start to deal with.”

He added, “This took a team. We need to keep the team together and cross the finish line together.”

Dennis Bahr, a Hamilton County Conservation board member, outlined the history of the project.

“This project is designed to meet the needs of Hamilton County and the surrounding areas. It goes back over a decade as various people and committees have recommended a facility such as this.”

One study, Bahr said, pointed out that there are 750,000 people in a 60-mile radius that could potentially use the facility.

“In August 2012, the golf course purchased an events tent. After that point, people started asking for more and more services,” he said.

Then, what started initially as a renovation of the existing club house developed into the new building project.

“We hope to complete construction in late 2018,” he said.

Daniel Ortiz-Hernandez, city manager of Webster City, is eager for the completion of the conference center.

“The city is looking forward to seeing this project come to fruition,” he said.

Ortiz-Hernandez said the city had contributed to the project through grants from the Hotel/Motel Tax Board.

He expects the economic impact could be substantial for Webster City and the surrounding communities.

“Briggs Woods is the jewel of our community and the county,” he said. “And this is going to be a great amenity that will draw a lot of people. Our hotels are looking forward to the additional capacity it will generate and it will benefit the local restaurants and businesses too.”

Kelly Haman, special events coordinator for Briggs Woods and one of the driving forces behind the project, said it was the result of two years of hard work, collaboration and coordination by many partners.

“Many of you have been able to envision the potential of the Briggs Woods Conference Center to bolster tourism and to have a positive impact for Hamilton County,” she said in the fall of 2017 as the ground was broken. “Enough of you also believed in the project vision to get us here today.”

Haman said that originally the plans called for $400,000 addition to the golf club house.

“We’ve come a long way since then,” she said.

Peterson Construction, of Webster City, was awarded the contract for the construction of the conference center. The firm turned in the lowest bid of $2,223,000 of the seven bids submitted for the project.

The single-story, 11,250-square-foot conference center will feature four conference rooms and a commercial kitchen. The flexible arrangement of the building will allow each conference rooms to be used independently or to be opened up to accommodate about 360 people.

Haman said the new structure will be located directly north of the existing golf clubhouse. A cart shed has been demolished to make room for the construction.

Russ Appel, superintendent and general manager, said the course has lost some larger conferences, meetings and golf tournaments through the years.

“We just didn’t have the space for them to have a banquet or sit-down meal,” he said.

With the new conference center, Appel said the golf course and the park becomes “the complete package.”

Appel said people who use the conference center can also take advantage of the park’s campgrounds and cabins, fish at the lake, hike the trail or play a round of golf.

“And we truly believe that the motels, restaurants and other businesses in the community will benefit as well,” he said.

“He designed a conference center that functions properly to do all of things we needed it to do and to be a great asset to the community,” Haman said. 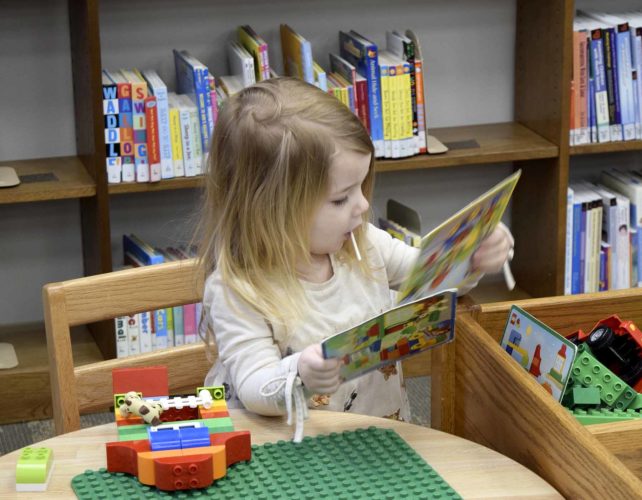 ROCKWELL CITY — When a visitor to Rockwell City drives around the city square — with the Calhoun County ... 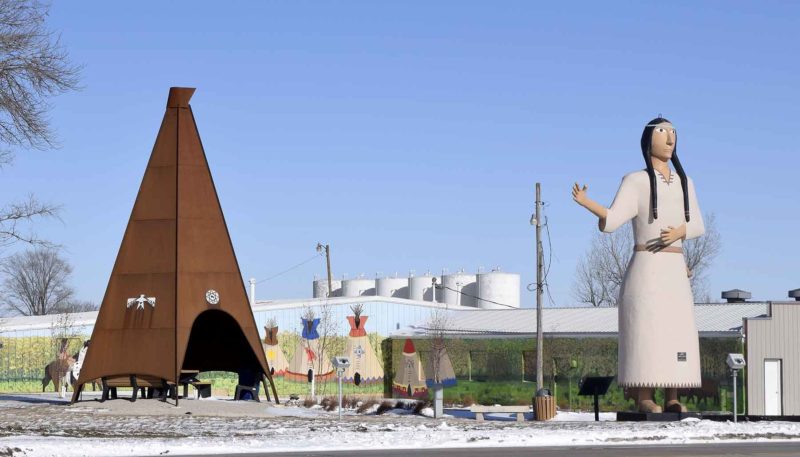 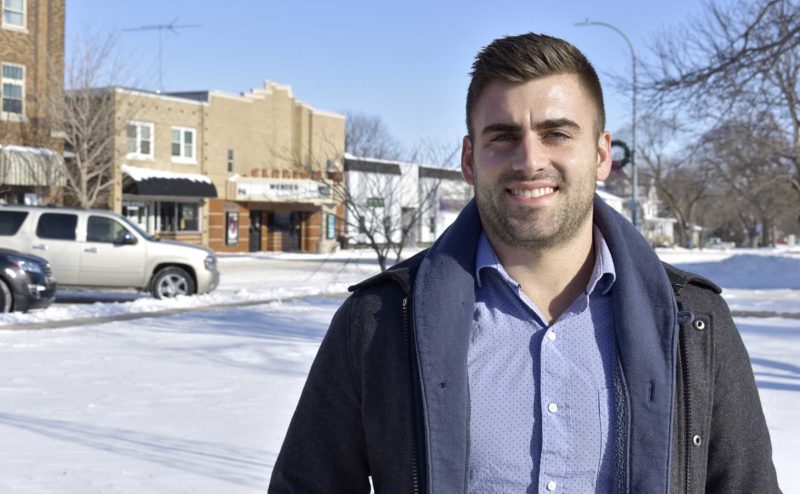 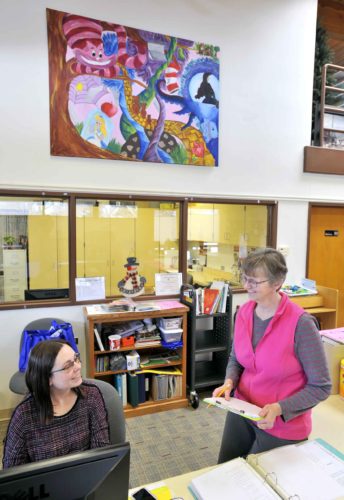