-Photo by Kriss Nelson
Matt O’Hearn, central supply manager for the Winfield United Answer Plot Operation’s Center checks seed that will be sent out to be planted at Answer Plots across the United States.

-Photo by Kriss Nelson
A row of combines await for harvest at the Winfield United Answer Plot Operations Center when they will be sent out across the U.S. for harvesting of Answer Plot field trials.

-Photo by Kriss Nelson
Caleb Kettenacker, equipment manager for the Winfield United Answer Plot Operations Center checks over a sprayer before it leaves the center later this spring. 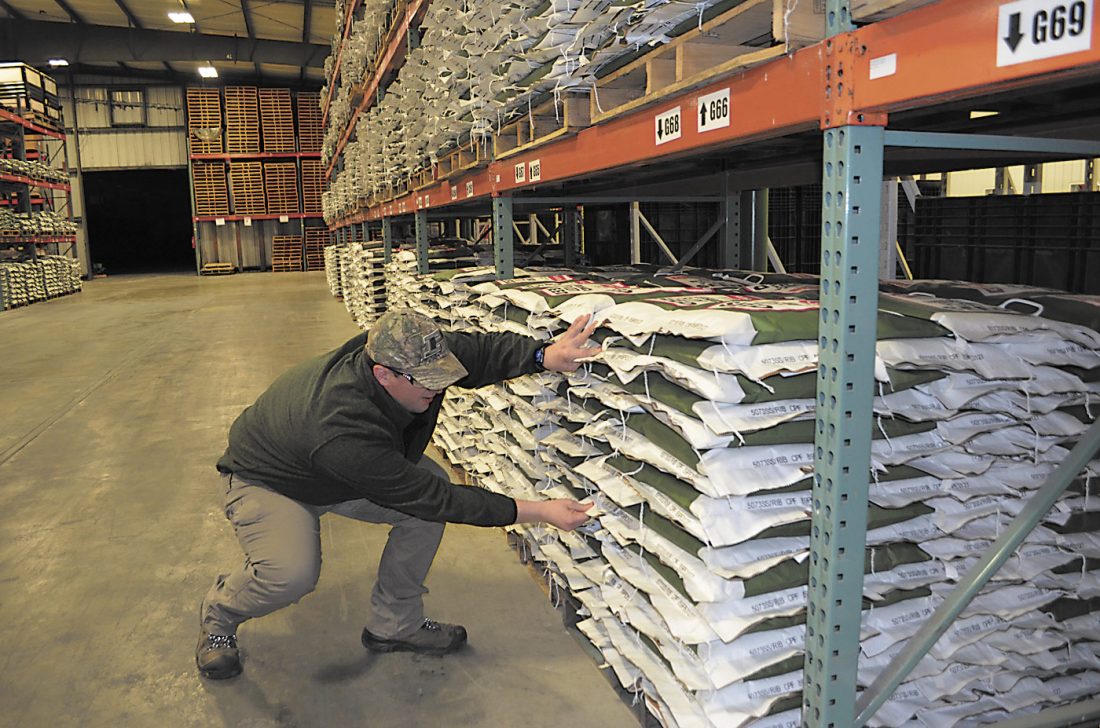 -Photo by Kriss Nelson
Matt O’Hearn, central supply manager for the Winfield United Answer Plot Operation’s Center checks seed that will be sent out to be planted at Answer Plots across the United States.

VINCENT — Have you ever wondered what makes all of the data and research from Answer Plots possible?

“We are very unique to central Iowa and pretty unique to the entire country,” said Todd Coulter, operations manager at Winfield United Answer Plot Operations Center. “I don’t think there is any other company that does our type of work and does it the way we do it at this size and magnitude.”

Winfield United describes its Answer Plot Program as a premier research and demonstration resource that has produced millions of data points and is also one of the industry’s most extensive data sets.

In fact, the 2 million data points generated through the program each year undergo rigorous examination that starts at the Winfield United Answer Plot Operations Center. This, according to Winfield United, ensures farmers have access to agronomic data that is statistically accurate, highly localized and nationally validated. 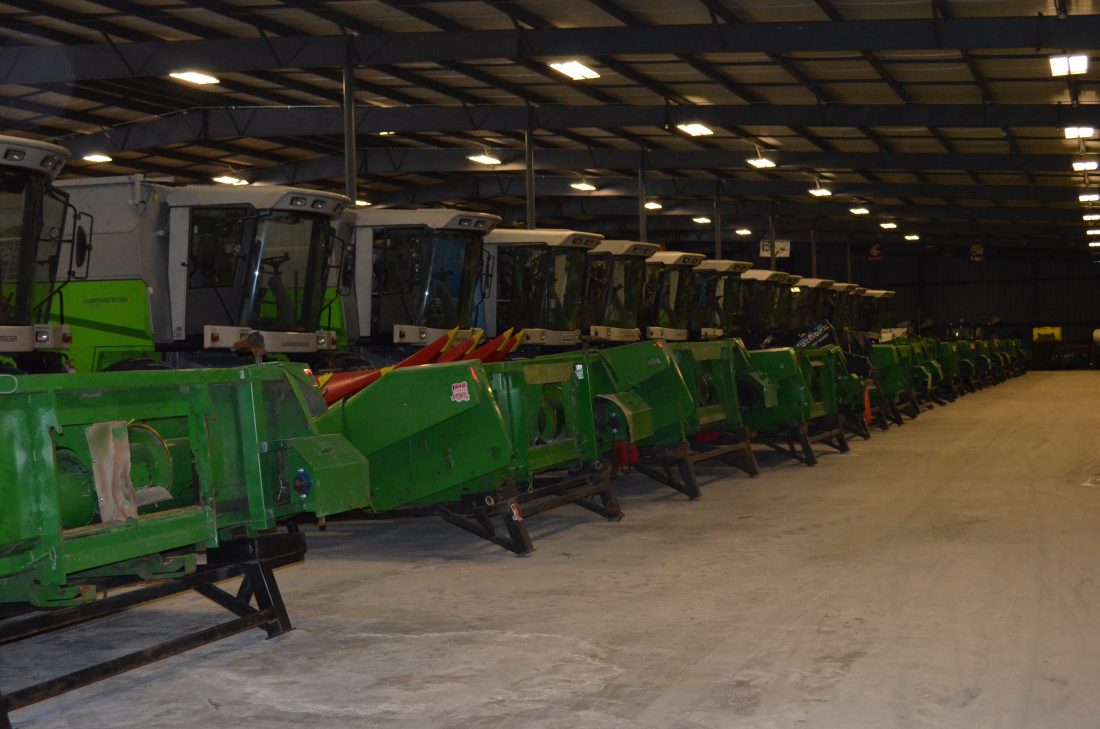 -Photo by Kriss Nelson
A row of combines await for harvest at the Winfield United Answer Plot Operations Center when they will be sent out across the U.S. for harvesting of Answer Plot field trials.

“This is the heart of it,” said Coulter. “We are a large piece of the puzzle for Winfield United.”

The Answer Plot Program, Coulter said, began in 1998 at the former Answer Farm south of Vincent, moving into town in 2008.

“We basically out grew that site and moved over to what used to be a Land O’ Lakes soybean processing plant,” said Coulter. “They never thought we would outgrow it. We have, and we are actually renting other facilities elsewhere for storage.”

The Answer Plot Operations Center is just short of five acres that are all under one roof, with an additional three or so acres outside that make up the facilities. The company also rents 70 acres of farmland to the north of the building site used for demonstration and plot work.

The center employs 12 fulltime staff and will add an additional 25 to 30 employees during the peak season. 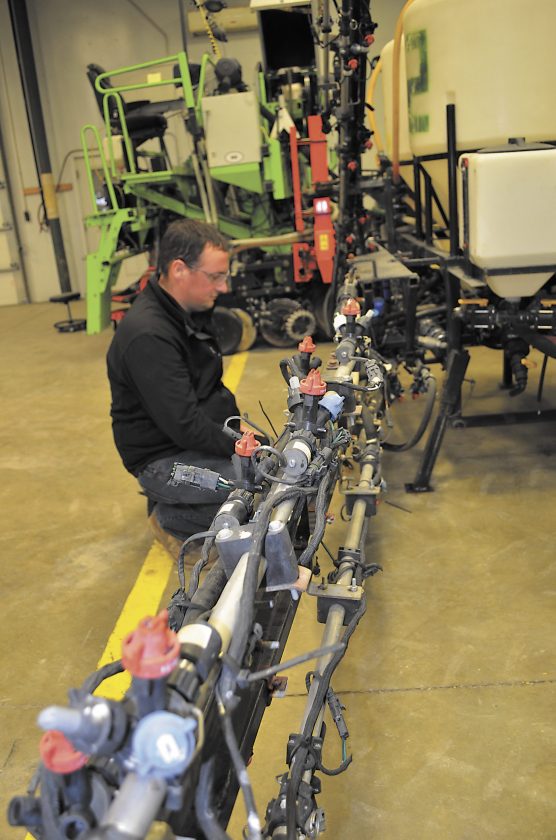 -Photo by Kriss Nelson
Caleb Kettenacker, equipment manager for the Winfield United Answer Plot Operations Center checks over a sprayer before it leaves the center later this spring.

What goes on at the Answer Plot Operations Center?

“We are the hub for all of the Answer Plots,” said Coulter. “We have about 150 sites across the United States with support in Quebec and other parts of Canada with that business up there.”

Coulter said the Answer Plot program is also present in South Africa, Mexico and some areas in China.

“When I say hub, we have 15 teams now and we have everything here to supply those teams that are remotely based. They will come here, get their equipment, get their supplies, go back out and perform the work that needs to be done.”

Those 15 teams, Coulter explained, each have their own semi, combine, tractor, planter, sprayer and tiller tractor.

“They have everything that they need to do their work through the whole year and it is all stored here every winter and gone through by Caleb’s team for maintenance and upgrades,” he said. “Everything comes out of here and comes back to here. It’s all state-of-the-art machinery.”

Caleb Kettenacker, equipment manager at the Answer Plot Operations Center, and his team are responsible for the maintenance of all of that equipment, as well as any needed updates and upgrades.

“We go all the way from changing oil, but we update the equipment, whether that is a new steering system or modifying equipment,” said Kettenacker. “We can accommodate for different trials that need to be done too.”

“His team does all of that for all of those locations and all of the sites across the United States,” said Coulter.

Innovation is something else that goes on in the shop at the Answer Plot Operations Center.

Five years ago, Coulter said Kettenacker and his team built and patented a high-clearance sprayer they have named “Sky Walker.” The sprayer is able to clear close to 10-foot tall corn and is used to spray trial plots with different brands of fungicides and adjuvants.

“It was all designed and built here,” he said. “We had Caleb and part of his team build it and test it here and we’ve got six on the ground with the seventh one being built for use for this summer.”

“We’re getting better data and we’re getting some really good data out of it,” said Kettenacker.

Cameron Aker, Insight Trial manager, said that data from the Sky Walker can be very helpful to producers when they are choosing their seed.

“It actually helps us score our Croplan hybrids and our competitor hybrids and partner hybrids on how they respond to fungicide,” said Aker. “If you open a Croplan by Winfield United seed book, there is a score called a RTF score. That tells the farmer that, if there could be a disease pressure year, how well that hybrid will respond or if it will at all. Just that alone has helped us build greater hybrids and we keep turning that over so every new hybrid that we have coming out has been looked at upwards of at a 100 locations to know how it is going to react.”

Another innovation to come out of the shop at the Answer Plot Operations Center, Coulter said was an in-furrow system that allows the use of up to three different products to be applied at any given time going across the field.

Coulter said plot technicians will write up a prescription for the in-furrow trials and they are able to put that prescription on a flash drive that plugs into the tractors and allows for that multiple in-furrow application.

There’s more than just equipment support that is done out of the Vincent location. All of the seed for the Answer Plot and Croplan Insight trials are packaged there as well.

Coulter said Matt O’Hearn, central supply manager, and his team will prepare and package close to 15,000 plot bags of corn and 8,000 plot bags of beans for Insight trials and a half a million smaller seed packets for the Answer Plots.

Aker said the Insight trials are for the company’s Croplan brand as well as the Armor brand of seeds — a new acquisition for Winfield United.

“It’s a sales driven research trial,” said Aker. “We have 90-some district sales managers across the country and Canada and this is a way they can show the customer how a hybrid is going to produce on their farm. We will have new release hybrids in there and two year out hybrids in there as well — that way they can see what is coming down the pipeline — what is going to be released next year and the following year for the Croplan and Armor brands.”

Aker said to the north of the Winfield United Answer Plot Operations Center they also have their own Answer Plot on site.

“The research that is conducted there are hybrid characterization trials, soybean characterization trials, fungicide trials, in-furrow trials with different starter trials, plant growth regulator trials, corn silage trials and in the past we have conducted sunflower trials,” he said. “It’s pretty varied and broad — that’s another thing that is nice about Vincent. We have a field just to the north of us so we can test equipment. We can do research and have a show plot and have people here that can see our facility and what is being done elsewhere in the country.”

Kettenacker said they utilize 10 to 15 acres of that land to test all of the equipment before it leaves the facility. Testing is done at some pretty peculiar times too.

“We have crews, such as the Delta region crew that will begin planting on March 1st or the end of February and if they do, we will go out and plant in the snow just to make sure everything is functioning correctly,” he said. “We will also try to plant as early as we can here so we have corn that is ready to harvest as early as possible so we can test combines before they leave.”

Coulter said there has been growth not only within Winfield United, but at the Answer Plot Operations Center in Vincent as well.

Winfield emerged with United Suppliers in 2017 and has also acquired Solum, Inc, a soil testing lab in Ames and Armor Seed, an Arkansas-based seed company.

Locally, Coulter said there has been an addition to the Answer Plot Operation Center’s facility with a new conference room, upgrades to the front office and a new bagging and seed treatment area.

If the ag economy improves, Coulter expects more upgrades to be made at that time.

“We have a lot of good visions, but the markets are all pretty tight right now,” he said. “As you see the ag economy start to turn for the positive again then that’s when we will be looking at expansions for sure. This center will most likely only get bigger. When we talk about supplying everything for the teams, that’s why Vincent is here and what makes us unique is that we are a one stop shop for everything they need,” he said.