-Submitted photo
Prestage Foods of Iowa, shown here under construction, is located near Eagle Grove and will have the capacity to process 10,000 pigs daily.

-Photo by Chad Thompson
Terry O’Rourke, general manager and vice president of Prestage Foods of Iowa, explains how hogs will be guided through the plant with an automated system. He said the guide nudges the hogs and then backs off allowing them to move forward on their own. Jere Null, chief executive officer, looks on at right. 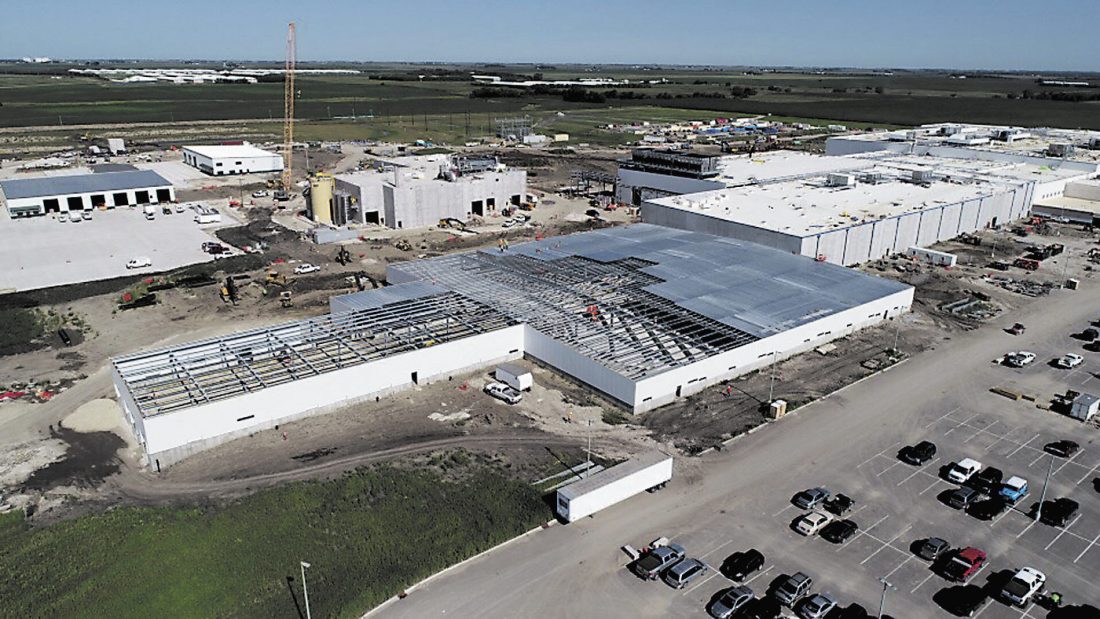 -Submitted photo
Prestage Foods of Iowa, shown here under construction, is located near Eagle Grove and will have the capacity to process 10,000 pigs daily.

“We are actively hiring employees right now,” Jere Null, the company’s chief operating officer, said. “We will be interviewing this week, next week, and the week after that in Eagle Grove.”

The $300 million, 700,000-square-foot plant will be open for business March 4. The plant was initially going to open in January, but Null said construction delays prompted the company to move the date back.

The plant will have the capacity to process 10,000 pigs a day.

Null, who came to Iowa from Virginia, said the the company is getting aggressive in its search for employees. 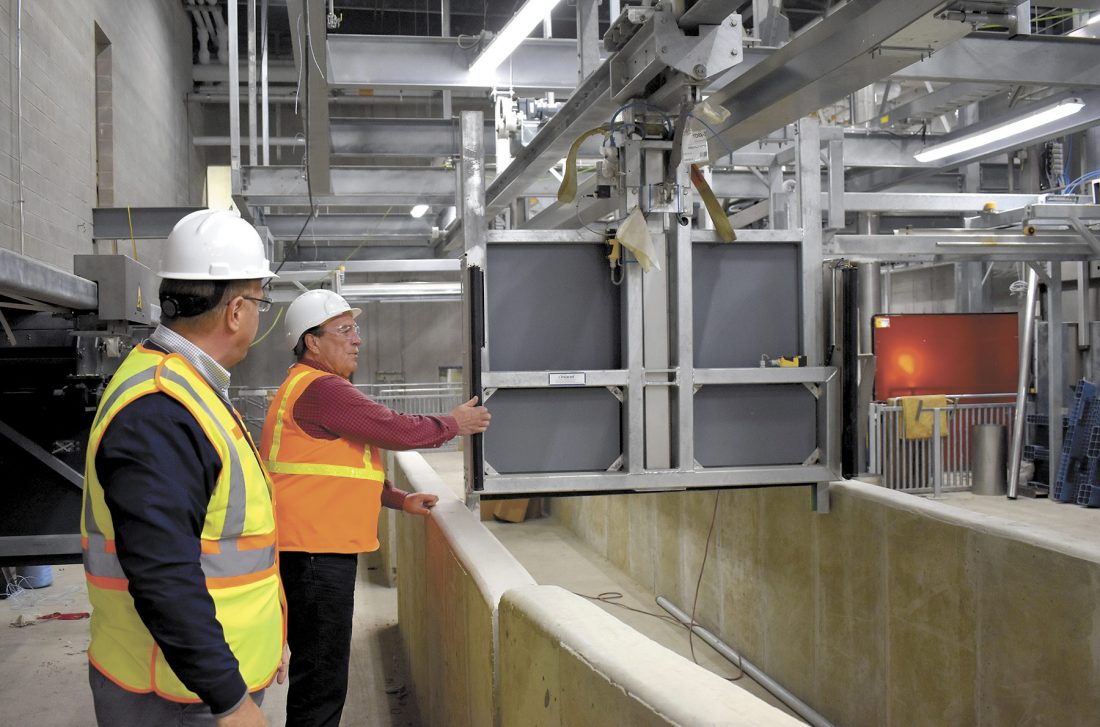 -Photo by Chad Thompson
Terry O’Rourke, general manager and vice president of Prestage Foods of Iowa, explains how hogs will be guided through the plant with an automated system. He said the guide nudges the hogs and then backs off allowing them to move forward on their own. Jere Null, chief executive officer, looks on at right.

He said the company has hired employees from North Carolina, Minnesota, Nebraska, Missouri, and throughout Iowa.

About 100 applicants were interviewed on a recent January day, he said.

“We are excited about the interest we have seen from people about working with us and obviously with low unemployement it’s difficult to attract employees,” Null said. “We are encouraged by the amount of interest shown with applications.”

Iowa finished 2018 with the lowest unemployment rate in the nation at 2.4 percent, according to published news reports.

More than 1,000 applications have been reviewed by Prestage so far, according to Null.

Prestage will employ 700 people at the onset. The goal will be to employ more than 1,000 workers.

“We are definitely optimistic about the level of interest we have received,” Null said. “We have been talking to retailers and we are very excited about what we are seeing on the buying side. We also feel like we will be able to secure the hogs we need. Building a well trained and a good workforce is certainly our challenge.”

Prestage has been working with Iowa Central Community College on job training and will continue to do so.

“We are developing work training programs,” Null said. “We have begun that training.”

One such training has focused on hazardous communications training with mechanical employees.

“We believe we will be working for several years with the college,” Null said.

The company is working to secure other regional partnerships, specifically in the trucking industry.

“We expect to use a lot of transportation with Iowa companies and that includes Decker (Truck Line, of Fort Dodge) and Ennis (Corporation) out of Clarion,” Null said. “They will be the backbone for a lot of our trucking.”

About 50 full-load refrigerated trucks will travel to and from the plant each day.

Roads that lead to the plant were improved during the summer of 2018. Additional turn lanes were added to help handle the increase in traffic.

Inside the plant, highly advanced machines will be used in the process of butchering pigs.

“It will be the most modern plant in the world until the next one is built,” Null said.

A $2.5 million thermal oxidizer to control the odor of the plant is one particular machine considered to advanced.

That will be used in the rendering plant, which Null said is the most potent source of odor.

“The rendering plant cooks the inedible parts of the animal down and turns it into animal feed,” Null said. “That can be a pretty pungent odor. Most plants will put an air scrubber on the rendering plant, which is what we do on our barn, which we consider a pretty low offensive odor.”

The thermal oxidizer will burn at 1600 degrees Fahrenheit.

“A thermal oxidizer incinerates odor,” Null said. “Literally burn up these particulates in the air that create the odor before you release the air to the atmosphere. It’s highly effective. It virtually eliminates any odor coming off that system. We think it will be extremely effective.”

Null said this is just the fourth thermal oxidizer used in plants throughout the United States.

“The other three are in urban areas, in areas where companies were almost forced into a situation where they might close if they don’t resolve their odor issues,” Null said. “We felt like we made a commitment to be a good neighbor. We will have the only thermal oxidizer in the state.”

An air filtration system, built by Hog Slat, of Humboldt, has been installed in the barn portion of the plant.

Robots will be used for a number of processes, including moving the animals throughout the plant and precision meat-cutting.

“A lot of the back-breaking jobs have been engineered away,” Null said. “Whether it’s odor control or animal handling, this is very modern, new technologies.”

Some of the production workers will be asked to handle livestock as they are introduced into the plant.

“That’s one of the most important factors in the process,” Terry O’Rourke, general manager and vice president of Prestage Foods of Iowa, said. “The humane handling policies and procedures. Those people will need to be able to understand and interpret. Production jobs, skilled butcher positions that will keep the food safety at the highest level during the process.”

Prestage will export about 30 percent of its meat. The top markets are anticipated to be Mexico, Japan and China. South Korea is another important market to the U.S., Null said.

He is hopeful the trade disputes with China will get straightened out.

“I think the whole industry understands the need to resolve our issues with China,” he said. “With that said, it has been tough on the pork industry. We believe China needs the product. The U.S. is extremely efficient producing pork, corn and soybeans. We are honestly the best in the world and China is a huge consumer of those products. So I know our industry and company believes, as painful as this is, it will be resolved.”

Null said the changes to the North American Free Trade Agreement have been welcome.

“We still see meat going to those countries,” Null said. “We are relieved that it appears not to be an ongoing issue.”

The United States reached a new deal with Canada and Mexico in September.

The agreement will preserve zero-tariff access for U.S. pork to Mexico and Canada, according to the National Pork Producers Council and North American Meat Institute.

About 45 percent of Prestage’s meat will go to other processors. Those processors will then make bacon, ham or sausage.

“This is a raw material plant,” Null said.

The other 55 percent of meat will be cuts such as pork loins, spare ribs, back ribs, tenderloins and Boston butts.