-Submitted photo
Lance Peed, of NEW Cooperative looks over the SoilMap Dispatch area for the cooperative’s agronomy application services. This software was created by NEW Cooperative and is being used by other cooperatives in the state of Iowa.

-Submitted photo
The feed mill in Pomeroy has recently been updated and is one of the six feed mills owned by NEW Cooperative. 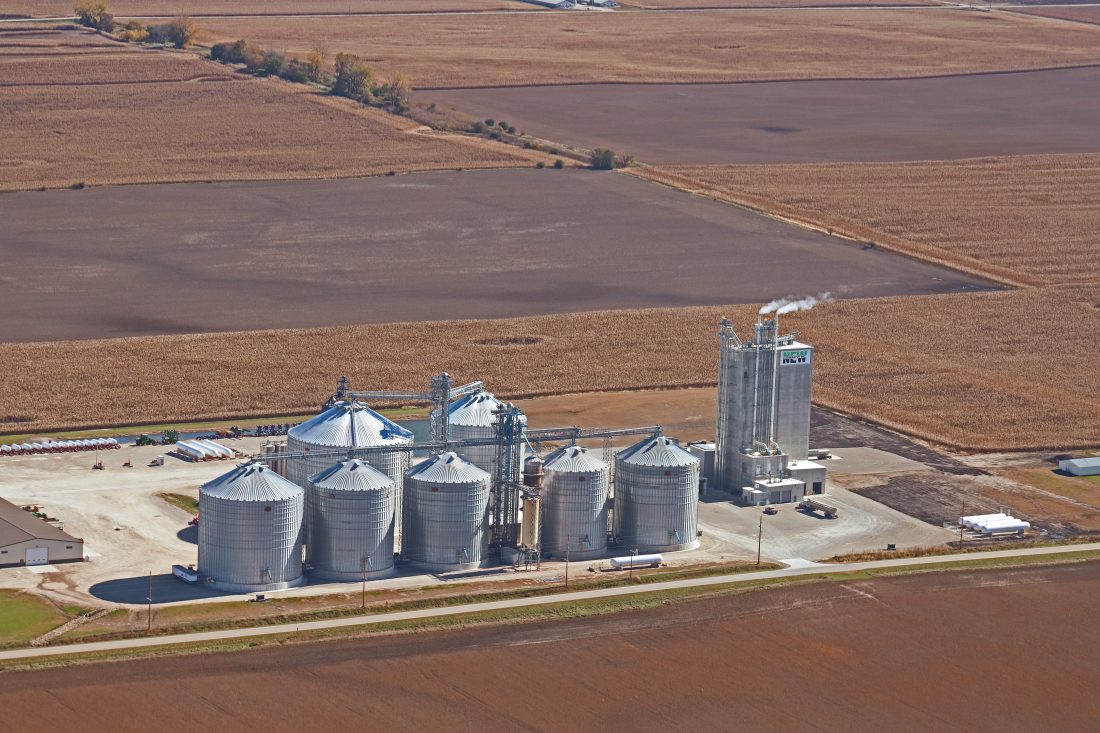 Careful consideration and lots of strategizing is what it takes to keep growing a cooperative.

NEW Cooperative, Inc., which is made up more than 40 locations, continues to see growth, even in times of an agricultural economic downturn.

Whether it is within their feed division, agronomy or grain departments, general manager Dan Dix said they carefully plan each growth effort performed within the company.

“A lot of these projects are things we have looked at for several years,” he said. “You want to make sure it is the right plan and that we are building in the right place. You can’t pick it up and move it afterwards.”

Some of the decisions of their growth are based on needs for updating facilities. 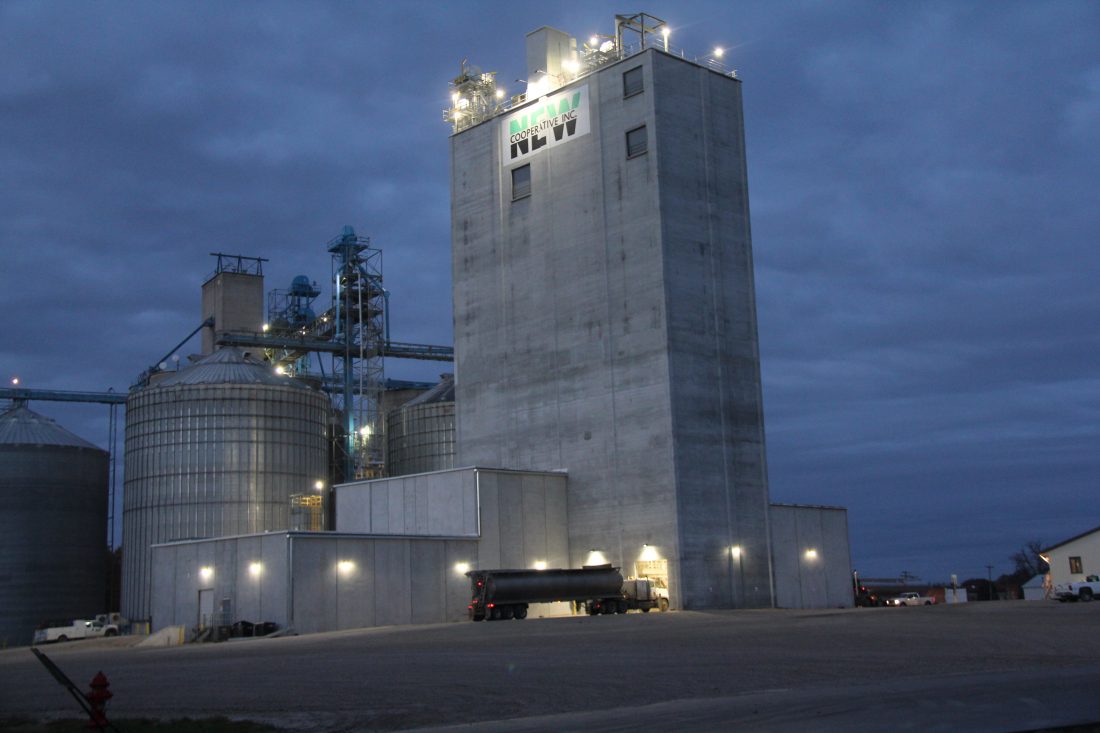 -Submitted photo
The feed mill in Pomeroy has recently been updated and is one of the six feed mills owned by NEW Cooperative.

“Some of these facilities were laid out for handling grain in the 1970s,” Dix said. “It’s not as simple as sticking a bin there. It is all tied into the entire grain system. Everything has to match up in speed, capacities and all of those aspects.”

It also takes time to research and properly plan for these projects.

According to Dix, most of the projects going on at New Cooperative were researched for two years and are based off of business volume at that particular location.

It is the growth of the ethanol industry, he said, that has helped to spur growth within New Cooperative. 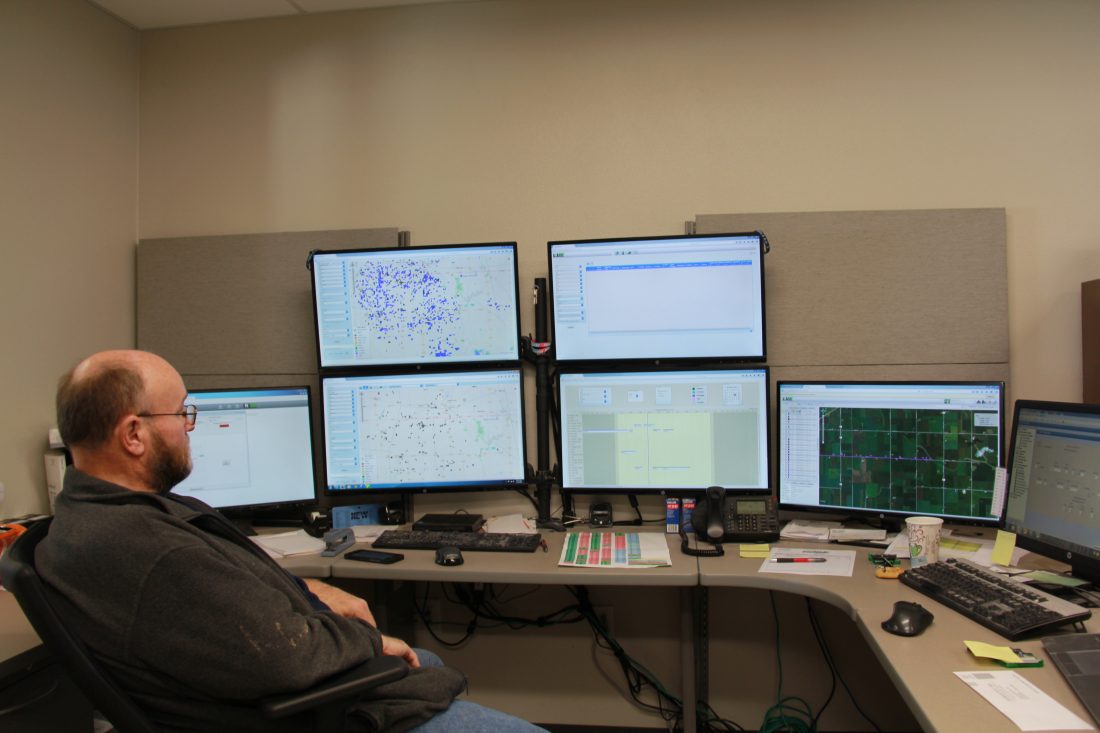 -Submitted photo
Lance Peed, of NEW Cooperative looks over the SoilMap Dispatch area for the cooperative’s agronomy application services. This software was created by NEW Cooperative and is being used by other cooperatives in the state of Iowa.

“Back before the age of ethanol, we thought everything was going out on a train. We really considered how long some of these facilities were going to be able to be open all year long,” he said. “Ethanol really helped continue to grow grain assets in communities without rail service for NEW Co-op. There was a period we were unsure if we should be investing in some of those little elevators.”

The development of New Cooperative’s feed division has also allowed for growth at those smaller grain locations, Dix said.

“We never used to grind 36 million bushels of grain ourselves, so some of our strategies behind where we put these feed mills have been to place them in areas where some of our lowest margin grain locations are,” he said. “It’s a manufacturing business, so it fixes the margin of that corn going through the feed mill for us.”

A prime example is the cooperative’s Rowan location.

In just a few short years, what was once a cornfield has now been developed into a multi-million bushel grain elevator, agronomy warehouse and, most recently, a home to a new feed mill.

“The Rowan site was a cornfield in 2014,” said Dix. “Our board and myself pulled up to a driveway across the road and our intentions, shortly after the merger was complete with Dows and Rowan, was to look at building a new elevator and an agronomy facility, and at the time, we didn’t really have a mill in our sights.”

“But as our feed business grew, it shortly became apparent it would be a great site for a feed mill.”

Although there are a lot of different strategies around how and why New Cooperative builds and updates, there is one main reason behind what they do.

“The core reason behind a lot of it is just trying to serve the farmer better,” he said. “If we built only in places that made the most sense from a return standpoint, the company wouldn’t look like it does today. We are a cooperative, we are owned by the members and we are here to help them succeed. That’s still a major component in what we do.”

According to Dix, those mills, combined this year, will utilize roughly the same amount of corn as a 100-million gallon ethanol plant. As a company, New Cooperative helps to feed 5.6 million hogs and 6 million chickens annually.

“The livestock industry continues to grow in this area mainly due to the large source of grain that is available,” he said. “Our feed business, in general, has become one of our largest divisions. Our feed mills are all at or near capacity. Today there is additional business out there looking for milling capacity. We continue to evaluate if construction of a new mill will make sense somewhere.”

He added the cooperative is in the feed business to help create a market for grain.

“Commodity prices are very depressed right now and if that grain wasn’t being consumed through our feed mills, it would be hitting the same markets that everybody else is trying to hit,” he said, “and we just view it as a market that is 365 days a year for our members and a way to make a bunch of grain disappear; about 35 million bushels a year.”

Dix said there has also been growth in New Cooperative’s transportation division.

“We have 150 semis on the road every day,” he said. “We are continuing to source talented drivers to do that and it’s becoming harder all of the time. We work closely with Iowa Central (Community College) and a few other area businesses, but it’s becoming a challenge for us.”

“We are a transportation company, whether it is moving products into our facilities, fertilizer, chemical, seed or moving grain and feed,” he said.

Dix said New Cooperative has maintained sales and volumes thanks, in part, to new business the company has acquired.

The large fertilizer hub in Roelyn has been in operation for more than three years and is also a terminal for manufacturers to warehouse their product in as well.

“We provide a service to them,” he said. “There are other fertilizer companies, like ourselves, purchasing product out of that terminal. Koch Industries, Simplot, Nutrean; they all use that as a marketing warehouse for their own wholesale business as well.”

“It’s very unique to a cooperative to have a company like ourselves that writes software and market it to other people,” said Dix. “It has given us an advantage for years to be able to design software that works for exactly what we do.”

He feels it has also given the company an advantage in gaining efficiencies over their competitors for a long time.

“Today there’s about 7 million acres in Iowa that are utilizing software that we built and market and run on computers here,” he said. “It is important the communication infrastructure in Fort Dodge is kept up and running and improving all of the time.”

Dix said a big focus of New Cooperative is trying to figure out how to let technology do more of the repetitive tasks and the paperwork shuffling.

“We just released a new software product about a year and a half ago to dispatch our equipment fleet across the company,” he said. “We have a live picture of the company as a whole to eliminate machines meeting each other.”

This will also be helpful during instances of inclement weather in one location and possibly not another.

“If we see there are machines sitting, we can send those machines jobs electronically, then the applicator can move and hit an area,” he said. “We covered more acres last year with a lot less equipment because we were able to just do it more efficiently.”

This software was developed by New Cooperative and is also being sold to other companies around the state.

Areas of recent growth for New Cooperative to the south include Carroll, Guthrie and Greene counties, as well as to the east in Franklin and Wright counties, where the company is seeing both an increase in their agronomy and grain business.

In Greene County, near the small town of Cooper, Dix said they are building a new warehouse for seed and chemicals, as they have already outgrown their current warehouse.

“Cooper started as a satellite, we had some business in that area, saw the potential to grow it and today, it is our largest anhydrous ammonia location of the whole company,” he said. “It was just cornfield a couple of years ago.”

In the fall of 2017, New Cooperative made a purchase of two locations: Platinum Grain in Anthon and grain assets of Berne Cooperative in Mapleton and Ute.

With those purchases and additional grain storage built, Dix said they have either grown or added 19 million bushels of storage capacity since 2016.

There is also additional liquid fertilizer storage being constructed at the company’s Vincent, Clare, Washta, Ute and Pomeroy locations.

What sets NEW Cooperative apart from others?

“We understand why we are here and that is to help our customers and we realize there’s a lot of work today to keep up with farmer’s size and speed and requirements from us and if we don’t continue to invest in infrastructure, facilities and equipment, it takes a very short time to fall behind to a point that you can’t catch up anymore,” said Dix. “Cooperatives in Iowa, there are many struggling with that right now.”

He added as the size of equipment producers are using continues to grow makes for a need for New Cooperative to ensure they can accept the grain in the fall in a timely manner.

“It’s a huge investment and we have to be profitable to continue to be able to invest in our facilities, but yet we have to be competitive at the same time,” he said. “We think it is very important to our membership that we continue to keep up with them and what they need as farmers is changing a lot.”