-Photo by Joe Sutter
Scott Rector prepares some salad dressing from scratch at the Second Street Emporium. Rector and his wife Candy Rector, have owned the restaurant for 39 years. 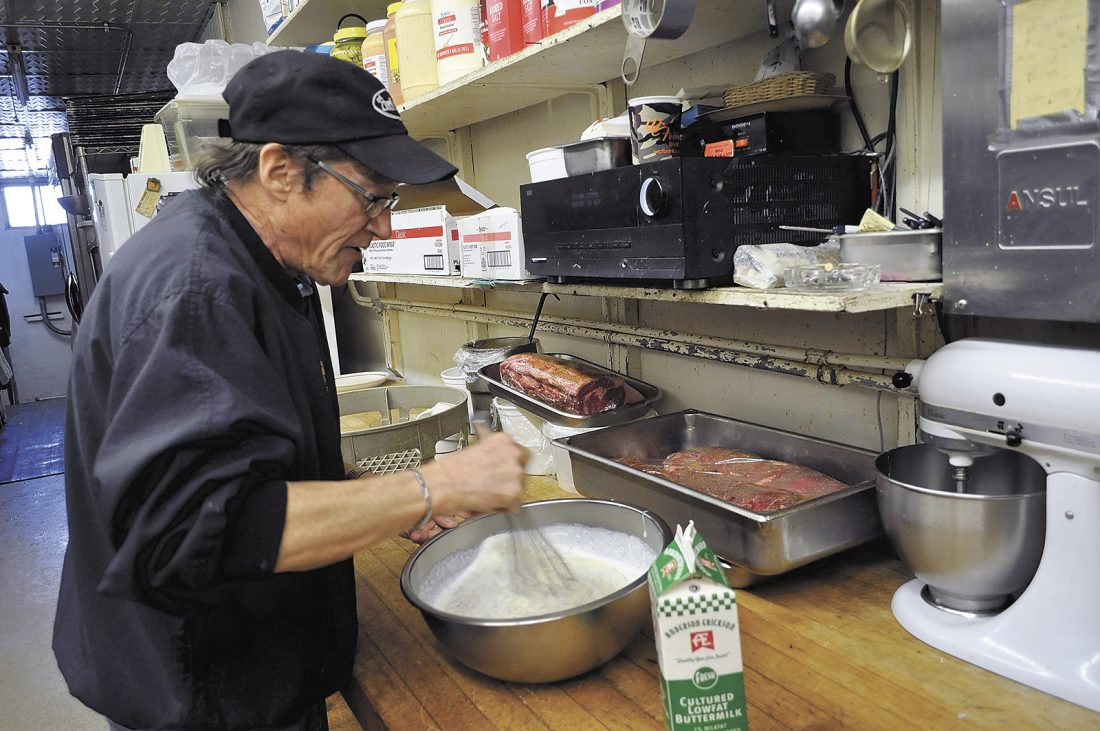 -Photo by Joe Sutter
Scott Rector prepares some salad dressing from scratch at the Second Street Emporium. Rector and his wife Candy Rector, have owned the restaurant for 39 years.

People eat out for various reasons and find themselves in different places in life, and it all contributes to restaurant owners looking at changing their menu offerings to give people more of what they want.

“I think what we’re seeing with that is a definition of sustainability, which is important to many chefs,” said Dunker. “That definition is really about nose-to-tail use of the animal, and what we can do to always leverage every part of the animal.”

As a result, Dunker said restaurants are beginning to use cuts of meat that may have been underutilized in the past, from the standpoint of professional food service. Items are beginning to show up on menus that have not been seen in years, such as meatloaf or pot roast.

“Part of it is a comfort food trend, which is also a growing trend in restaurants,” said Dunker, “but it’s also a way to tip your hat to full use of the animal, and I think that’s a win for everybody, with prices and with sustainability.”

She said the Food Network has changed the perception of food in general.

“It has created a sense of adventure and people are willing to try new things, such as various ethnic foods,” she said. “But if you are under 40, Italian, Chinese, Mexican foods, that’s just food. Ethnic food now is Mediterranean, African, Thai foods. We think those more global cuisines will grow across the market.”

Because of that, one of the cuts of meat on the horizon is tripe — a type of edible lining from the stomachs of various farm animals. Dunker said it’s widely used in Mexico to make tacos.

“It goes back to that full use of the animal, and not hiding those cuts of meat, either, like tripe,” she said. “People want to feature it and celebrate it, and do it in a way that’s interesting because of peoples’ interest in global food.”

Scott and Candy Rector own and operate the Second Street Emporium in Webster City, a full service casual atmosphere restaurant with a full menu of American food, with some Mexican and Italian foods.

Scott Rector said they opened in 1980 in their town of 8,000 people, and for them it comes down more to finding a balance between preferred menu items and doing what they can to keep people of all financial abilities coming.

They found that, after two major industries within the city closed in 2008, they wanted to add menu items that people could still afford to eat.

“(That year) we added things like fettuccini alfredo and emporium-style burritos,” he said. “Now I wouldn’t take those things off the menu because they’ve worked up to be some real favorites of the people here.”

“People watch the news and change their eating habits,” he said.

He also credited meat processors with preparing meats before they reach the meat counter, pre-seasoning some cuts and making other cuts into prepared-ahead meals, making it easy for people to try new cuts of meat and new ways to prepare them.

Dunker said restaurants create a $4.4 billion industry with 6,200 restaurants and bars across the state. It sounds “phenomenal,” until a person does the math.

“We are happy in our industry for a 5 percent profit margin, so if you do the averages, the average Iowa restaurant on any given day, if they achieve a five percent profit, they only have a net profit of $97,” she said. “Some are more, but that means some are less, so we have to look at ways to provide a great hospitality experience, and do it as cost-effectively as possible.”

One of the biggest competition factors for Iowa restaurants, she said, is the convenience store market, with its fresh and ready-to-consume foods, such as pizza, right there. The pizza industry has figured out how to own that notion from start to finish.

According to Dunker, 63 percent of restaurant food is eaten off premise, meaning that more people are ordering to go, for carry-out or at the drive-through.

“That means the traditional restaurant where you sit down and have things brought to your table is only 37 percent of the restaurant business these days,” said Dunker. “It’s requiring restaurants to find ways to add value. So that means they are finding ways to have things that taste great to go.”

That has brought about the addition of food delivery companies, which is filling a niche for consumers. But it will require some training in the food safety area for mandates such as food handling and holding temperatures.

Dunker said chefs are becoming more interested in relationships with farmers. She believes producers tying themselves in with restaurants is a good idea so consumers can have more of a dining experience, since the chef knows the farmer who produced the beef, pork or chicken being served in the restaurant, so the farmer’s story can become part of the restaurant’s story.

“When it features a certain producer’s (meat) it becomes a marketing tool and finds its way to the menu,” said Dunker. “There are restaurants doing that. It creates a whole experience where there’s a story that comes with a meal, but then it extends to the farm-to-table experience, and they feel like they’ve become part of that chain and are also connected to the farmer and to the land.”

She said the industry saw a major shift in what appeals to consumers following 9/11, saying trends showed consumers were more interested in comfort foods and the “hearth to home” notion.

“Who would have thought you could find gourmet macaroni and cheese?” she said. “Now it’s celebrated in amazing ways. It’s a new twist on classic comfort food favorites. I would never guess to find meatloaf, pot roast and mac and cheese on the menus of fine dining establishments — and they are featured items.”

She said people will pay more for foods labeled “premium.”

Two-thirds of consumers are buying sustainable seafood, which Dunker believes may be why restaurants are beginning to add so-called “trash fish,” such as mullet, to their menus.

One in four consumers were interested in trying merlot steak, which is often used in ethnic dishes.

Nearly 30 percent said they have tried new cuts of pork this year.

More than 69 percent of chefs said globally-inspired breakfast would be the year’s top food trend, and 64 percent said plant-based sausages and burgers will be be a top food trend.

Three out of five chefs said veggie-carb substitutes would emerge as new alternative to traditional starches.

Heme, which is an iron-rich molecule found in meat, is coming up on the cutting edge of food science as a possible stepping stones to a more environmentally-sustainable meat and protein alternative. Tech food companies are using it to bring a meaty quality to their wheat and potato protein burger with the “bloodiness” of meat cooked to rare doneness.

Dunker said select steak restaurants will be expanding their repertoires to include new cuts like Vegas Strip steak (from the shoulder area), merlot (from the heel) and bavette (the bottom part of sirloin known as “flap meat”).

Michelle Bernstein, a chef and restaurant owner who has also written cookbooks, said people never used to know the difference between Mexican cuisine and food from Cuba or Venezuela, but she said that is changing, and will continue to change.