-Submitted photo
The new Agriculture Stewardship Center is a hub for the Dordt College of Agriculture, playing a key role in preparing students to work as professionals and servant leaders in agriculture.

-Submitted photo
Shown here is one of the three classrooms inside the new Agriculture Stewardship Center for the Dordt College of Agriculture. The new center also features a conference room, office space and a larger meeting area in addition to industrial components.

-Submitted photo
CNC machines are featured in the new manufacturing lab inside the Dordt College of Agriculture’s Agriculture Stewardship Center. 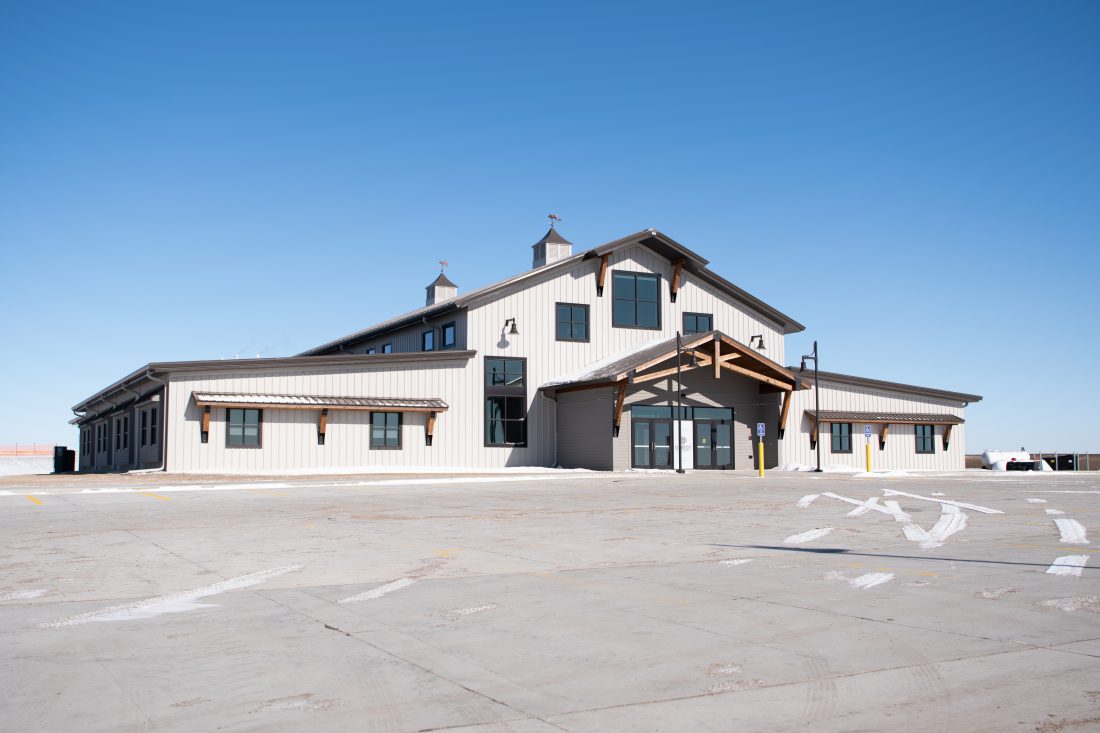 -Submitted photo
The new Agriculture Stewardship Center is a hub for the Dordt College of Agriculture, playing a key role in preparing students to work as professionals and servant leaders in agriculture.

SIOUX CENTER — With the addition of new curriculum, degrees and a rise in student body numbers, the Dordt College of Agriculture has been forced to expand with plans in place for further improvement and growth.

Gary De Vries, instructor of agriculture and agriculture department chair for the Dordt College of Agriculture, said the most recent addition to the college’s agriculture program is the Agriculture Stewardship Center (ASC).

“It’s been a journey for a few years that we have been working on it and the building that we dedicated on Oct. 20 is what we sought as the first step in that (growth) process,” he said.

The ASC is located approximately three miles north of Sioux Center. According to Dordt leaders, it will play a key role in preparing students to work as professionals and servant-leaders in agriculture.

De Vries said the ASC, which is a 26,000 square foot building, is made up of different sections. 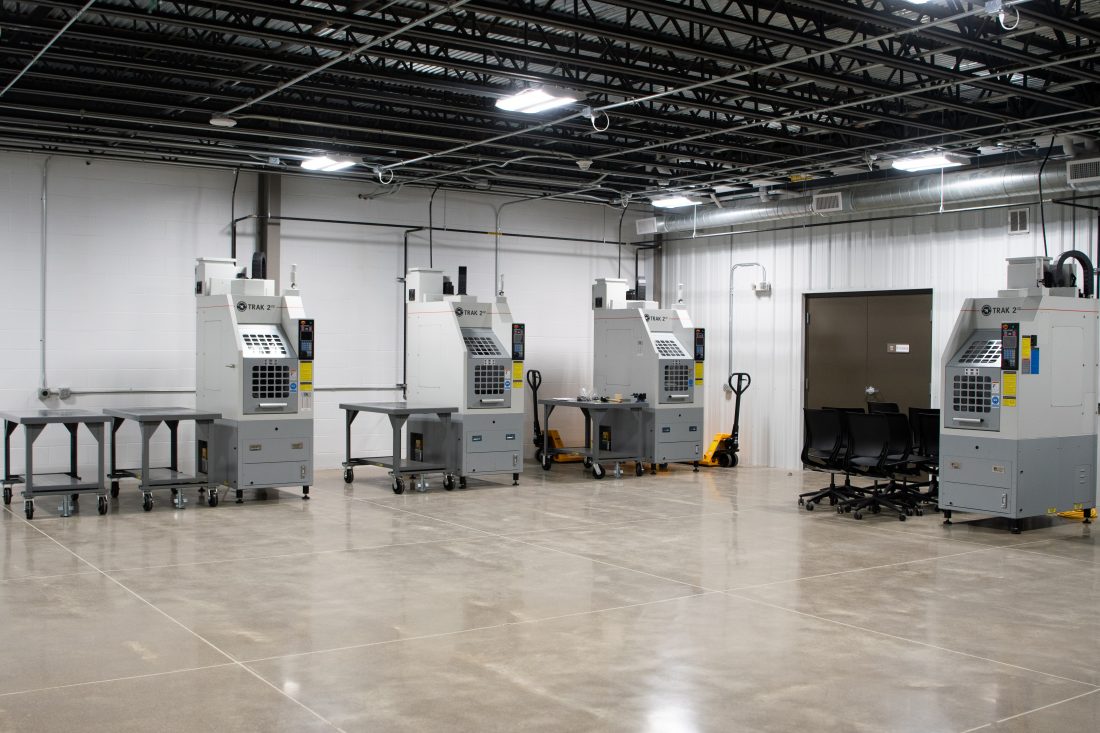 -Submitted photo
CNC machines are featured in the new manufacturing lab inside the Dordt College of Agriculture’s Agriculture Stewardship Center.

One section of the new building is made up of three classrooms, a conference room, office space and a large meeting area.

“These can be used not only for the ag department or campus, but is also designed to be used for community groups as well, such as for machinery dealerships, seed companies, commodity groups — they are able to utilize that space, as well, for their meetings,” he said. “The classrooms and conference rooms can also be used to accommodate breakout sessions and so forth.”

The north side of the ASC consists of three different components — all, De Vries said new to the campus.

“There is a shop space of about 8,000 square feet where we can do things like machinery maintenance, which is a class we didn’t have two years ago,” he said. “Precision ag also meets in there, but it’s a flexible, large space which is fully equipped with tools so we can do things with large equipment and have students interact with it.”

Next to that is a 2,220 square feet of space that is utilized by another new two-year program for manufacturing. 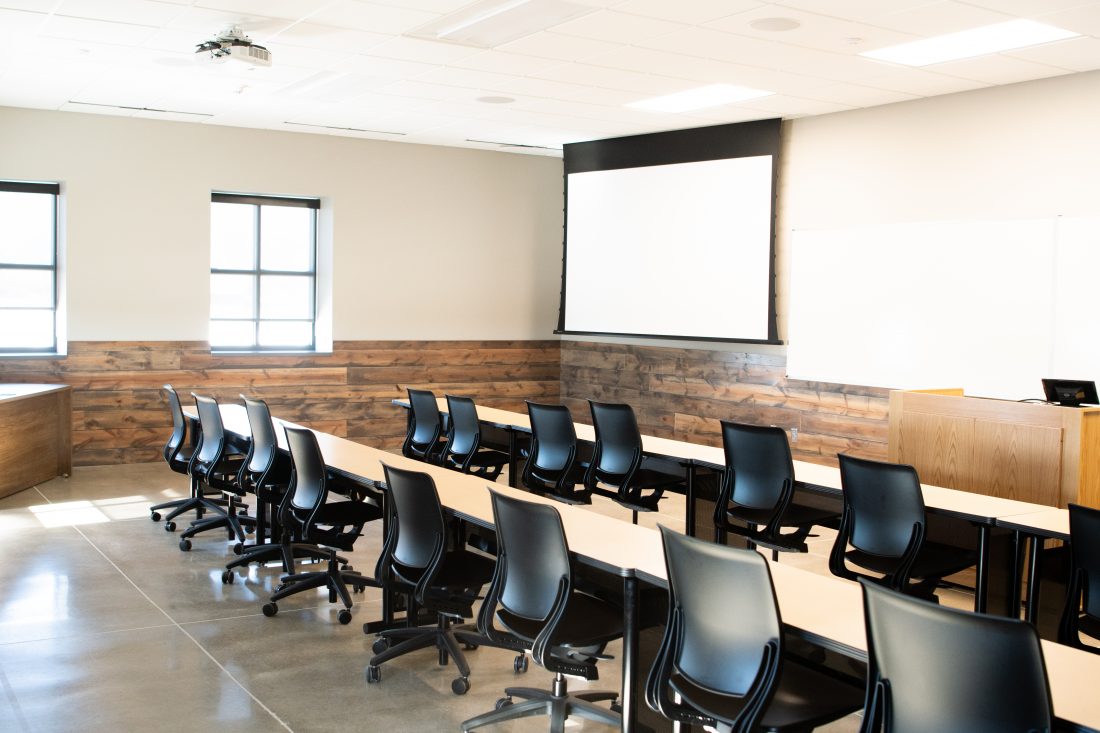 -Submitted photo
Shown here is one of the three classrooms inside the new Agriculture Stewardship Center for the Dordt College of Agriculture. The new center also features a conference room, office space and a larger meeting area in addition to industrial components.

“That space is hopefully going to be able to do a short line manufacturing type of activity that starts with a raw material and has a finished product at the end,” he said.

Also a part of the ASC and another new facet of the Dordt College of Agriculture is a welding lab.

Currently, De Vries said they are working on combing two different sites into one. Currently, one site is used for machinery storage with a couple of cattle yards for the college’s 25 head pure bred Angus stock and nearby to the south one mile is another site with an animal processing lab, additional machine storage and feed storage.

“So, what’s happening is, it is all going to consolidate on this site where the new building is, so our livestock is all going to come here, plus we are looking to expand what we are doing with livestock that is incorporated with our curriculum,” he said.

Currently in the phase two of planning, De Vries said they are considering the construction of a mono-slope facility that will be used for starting bottle calves to either finish to market or possibly sell heifer calves back to a local dairy. That area can also be used for the stock cows and finishing those calves as well.

There is also plans for what De Vries said will be called a “flex building” that will be used for a variety of livestock purposes to fit several of the college’s curriculum.

“We have a class right now that raises broilers. It’s a class called Food Connecting with Life, a non-ag major science class where they learn where their food comes from,” he said.

Part of those broilers, De Vries added, the students will also process for their last lab and they will create a dinner where they involve all of the food for the dinner knowing where it all came from and prepare it.

Another option for use in the flex building will be for lambing.

“In April, our freshman Animal Science course, have an experience lab and one of our local partners/friend of the college, lets us have a number of ewes to match the number of students in the class and lamb for them,” he said. “We lamb them, the students are directly assigned to take care of them, to ensure we have live lambs at the end and then also process the lambs and at the end of April the ewes and the lambs all go back home. It gives students that experience.”

Another potential use for the new flex building will be work done with two-day old bulls.

De Vries said those bulls come from a local dairy where they are bottle-fed by students and after about a month are weaned and then sold, for now.

“Our idea is that group of calves we could hold onto and feed them out in that mono-slope,” he said. “We want that flex building to be flexible enough to do those types of things.”

There is also a need and plan for a new animal processing lab. This lab, De Vries said will be used for the artificial insemination of cows, castrating bulls, medicating sick animals and more.

Additional machinery and feed storage as well as a greenhouse are also in the plans.

“Our hope is that by 2020 we will have those facilities built,” he said.

“The Dordt College of Agriculture will be 41 years old this year,” said De Vries. “We have had a long standing ag program.”

One of the things De Vries said the college is working toward is being a hub for research of different kinds of agricultural practices.

“On our 200 acres of farm ground, we currently do a number of different field trials that answer some questions that local producers have,” he said. “They’re not variety trials, per say, but they are checking on things like fungicide and when we should apply them and different kinds of program for weed control, planting dates on soybeans or how much down pressure makes when you’re planting corn on the yield at the end of the season — those kinds of things.”

De Vries said they work closely with the on-farm research crews at Iowa State University Extension in northwest Iowa and often times the results found on the college’s farm become part of the extension’s results.

This year, De Vries said there are plans to install a bioreactor and a saturated buffer on the property.

“That’s going to be a way for our students to actually do some new research to show the difference from the tile water coming in to the tile water coming out (of the bioreactor and saturated buffer) and what kind of an impact it had on nitrogen, for example, in that tile water and we will also be able to show local producers what that looks like,” he said.

De Vries believes there are definite aspects that set the Dordt College of Agriculture a part from others.

“Our location — we are in the heart of agriculture,” he said. “Sioux County, awhile back was ranked 13th in the country as far as gross ag products being produced and all of those counties ahead of us were from California. We are a bit unique with the numbers of livestock we have and so forth; in fact, we typically are a corn deficit county. We have enough livestock to eat all of our corn.”

The size of the college is another benefit.

“There are just some things that our students are going to be able to do that, because of our size, in a larger institution would be difficult,” he said.

De Vries feels it is also the Dordt College of Agriculture’s mission that says to “use a biblical foundation, theoretical knowledge and applied experience to prepare students to honor God through lives of service, leadership and agriculture” that makes them unique as well.

“What we tell students when they are looking at the Dordt College of Agriculture is this is the spot where you are going to get dirt under your fingernails and manure on your boots if you come do ag with us. There are a lot of opportunities,” he said.