$26 million feed mill one of largest in the state

-Submitted photo
The roller mill and hammer mill will be busy once the new feed mill at Cooperative Farmer’s Elevator in Ocheyedan opens. The new mill will need 70,000 bushels of corn per day, or about 18 million bushels per year, giving local and area producers another avenue for grain sales.

-Submitted photo
THE NEW $26 MILLION FEED MILL at Cooperative Farmers’ Elevator in Ocheyedan will soon be online. It is constructed out of concrete in the hope of giving it a longer life. Capacity of the mill is 3,00 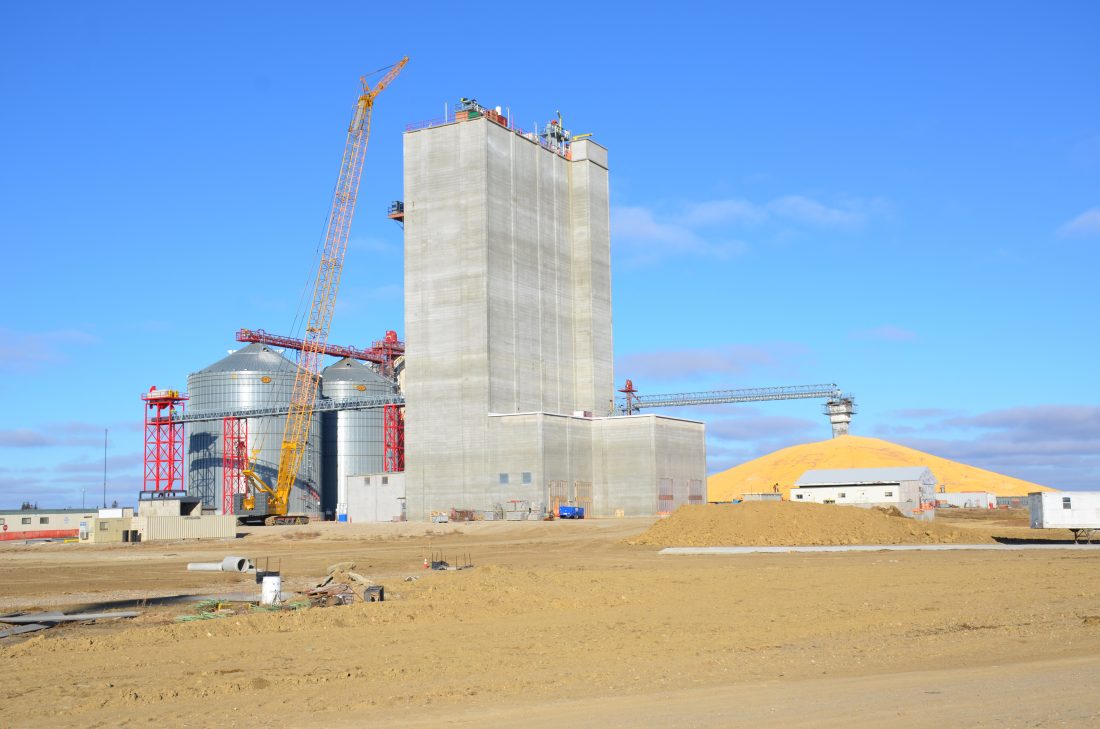 -Submitted photo
THE NEW $26 MILLION FEED MILL at Cooperative Farmers’ Elevator in Ocheyedan will soon be online. It is constructed out of concrete in the hope of giving it a longer life. Capacity of the mill is 3,00

OCHEYEDAN — A new feed mill that comes online this month at the Cooperative Farmer’s Elevator in Ocheyedan will bring jobs and improved efficiency to the area.

The $26 million feed mill is considered one of the largest in the state, and is expected to bring new life not only to elevator operations, but create 19 new jobs and ensure more timely delivery of feed orders, especially for swine producers in the area.

Steve Petersen, vice president of feed for CFE, said the new mill was put on the front burner due in part to increasing swine feed demands in the CFE territory.

In 2017, the company’s lumber division constructed 47 swine barns, and 2018 brought an additional 32 barns. Many of these barns, according to Petersen, were built to help support and supply the growing pork processing industry that came upon the completion of the new Sioux City-based Seaboard Triumph Foods, which implemented a second shift beginning last fall. 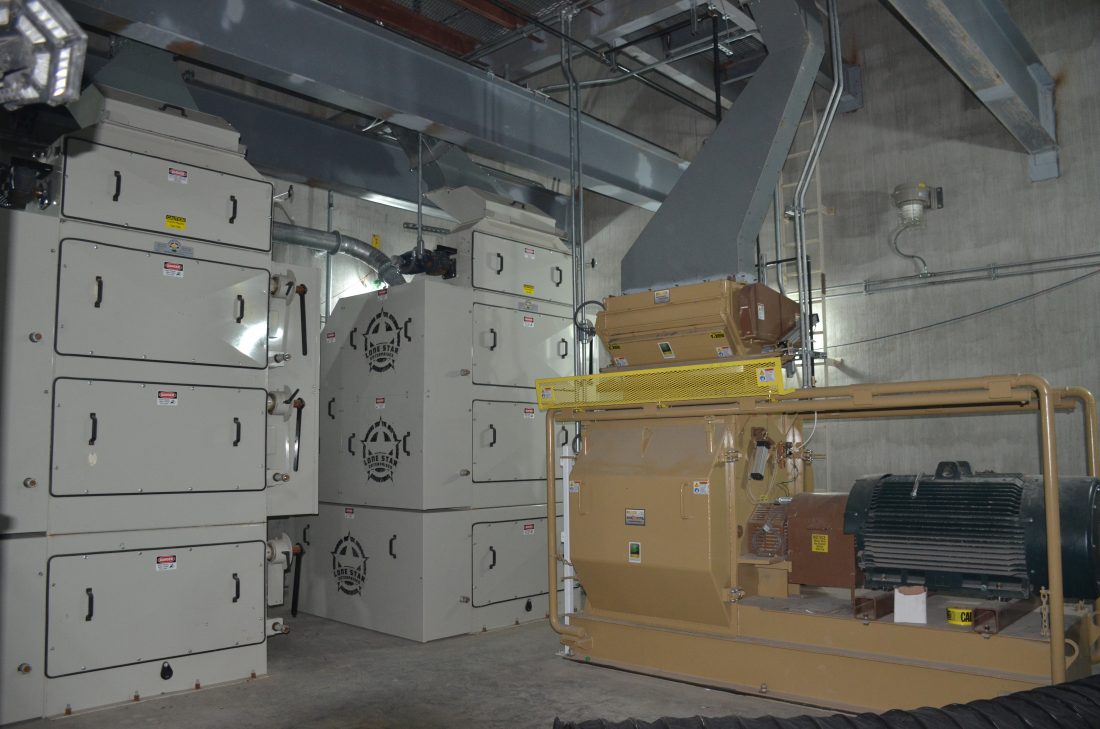 -Submitted photo
The roller mill and hammer mill will be busy once the new feed mill at Cooperative Farmer’s Elevator in Ocheyedan opens. The new mill will need 70,000 bushels of corn per day, or about 18 million bushels per year, giving local and area producers another avenue for grain sales.

“(The new pork production plant) created a need for more barns in northwest Iowa and has helped create a sale for some of those barns and/or a need for more pork (production) in the area,” he said.

“We’re anxious and ready to get things rolling because we’re manufacturing a lot of feed across the company and we can use the capacity here,” Petersen added. “We’re confident of getting a return back on this investment because of all the livestock in this area. There is a need for this mill.”

CFE is currently manufacturing a maximum of 4,500 tons of feed company-wide per day. The new location alone will produce 3,000 additional tons of feed daily.

It all comes down to improved efficiency in keeping all manufacturing areas of the company working together, Petersen said.

“A new capability of (this new mill) is the addition of pelleted feed manufacturing,” he said. “In addition to current mash feeds, pelleted feed products provide a more diverse product and feed offering.”

The new mill will require roughly 70,000 bushels of local corn per day, or about 18 million bushels annually.

“Due to the large increase in tonnage and corn needs, the mill is creating new opportunities for local grain producers to sell their grain back to the farmer-owned cooperative,” said Petersen, adding that it gives producers more options for selling their corn and in turn, the possibility of increased profitability for them.

An existing grain-holding facility next to the mill can store 5 million bushels of grain, which Petersen said will also help with efficiency and grain-at-the-ready when it’s needed. Excess storage for mixed feeds on site will allow the team at the mill to continue to fill orders even while waiting on trucks.

The new mill will produce 780,000 tons of feed per year and will allow 125 semi loads of complete feed to be delivered daily. According to Petersen, it will also allow them to be able to run 24 hours per day if company officials deem it necessary.

The mill features 1,790 tons of ingredients storage and will receive 25 to 30 loads of bulk ingredients daily. It boasts 12-ton batching with the capacity to kick out 13.83 batches hourly, along with three-line capability for pelleting options. The mill can mix 45 tons of pellets per hour per line.

A new feature to the mill is a digital app that producers can use via their smartphones or the CFE website to order feed during or after hours.

Petersen said it will ensure a more timely delivery of feed orders, and is already being used by CFE customers.

“Our customers are just starting to find out about it and are asking questions about it, but it’s beginning to boom now,” he said.

One of the mills, according to Petersen, as built in 1964 1964 and produced 100 tons of feed daily. Improvements over the years increased its output to 900 tons daily.

Today, he said it is getting tired, and another built in the 1970s is getting in the same shape. Of all the feed mills CFE owns today, the most recent construction was in 1992.

Petersen said the life of a steel-built mill might be 20 to 40 years, so the new mill was constructed of concrete in hopes for an extended lifespan.

The new mill has allowed for the employment of 19 more workers — including truck drivers, mill operators and warehouse people — and CFE will retain 10 other workers to keep the mill running.

All new positions have been filled.

“CFE is proactive towards that and we (participate in) Hazard Analysis of Critical Control Points,” he said, adding it’s a quality control kind of process done by a third party auditor. “All 10 of our feed mills are (inspected in that way) today.”

Petersen said CFE has already made improvements to liquid cattle feed capabilities at other CFE locations, and with those improvements, combined with the new large-capacity mill, CFE is positioning itself to better meet the demands of the local agricultural industry.

“We hope this rolls forward in a good way,” said Petersen. “We want to make sure we are growing with the community and making sure we are able to manufacture feed for a lot of years. With additional tonnage, better delivery times and more product available to help swine operations grow, it’s a win-win situation.”

The CFE radius for feed needs is 60 to 70 miles in every direction from Ocheyedan.