Clay County Fair: Rooted in the past; looks to the future 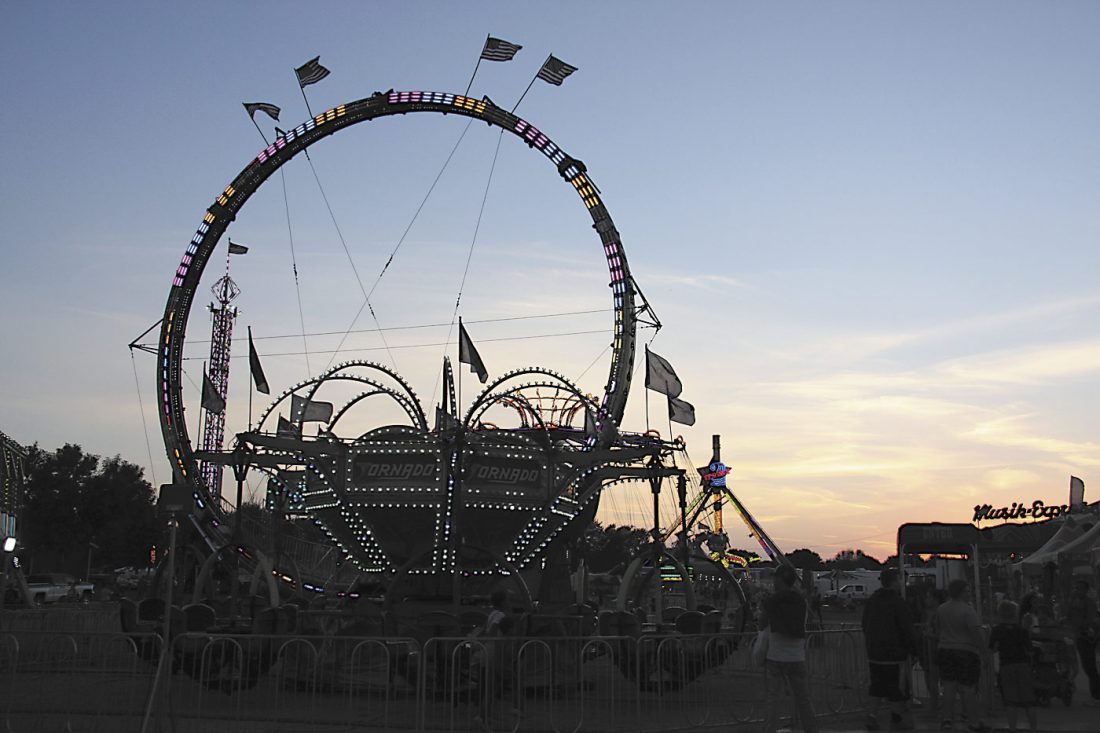 SPENCER — There are many aspects of the Clay County Fair that should not make sense, according to Jeremy Parsons, manager and CEO of the fair.

Those same aspects probably should have been more detrimental to the fair’s success over the years.

And yet, the fair is going as strong as ever more than 100 years after the Clay County Fair Association was incorporated in 1917, with the first official fair kicking off in 1918.

“…that 180 people in the midst of World War I would pledge $100 each (an amount closer to $1,800 today) to create the fair, and that still today, hundreds of thousands of people would flock to Spencer each September (while school is in session and summer vacations are over) to attend the Clay County Fair,” said Parsons, alluding to two things that seem unlikely to him under any other circumstances. “People sure had a lot of other things to think about in those turbulent times than starting a fair.”

In his eighth year at the reins, Parsons said the stability of the fair keeps it interesting for him as the CEO/manager.

“The fair board has been stable and that means people in my position want to stay,” he said.

Since 1947, Parsons said there have been only six managers.

“The thing about the Clay County Fair is the unique role it plays in northwest Iowa,” he said. “The fair still has the reputation — and still fulfills the role — of being the big thing to do in northwest Iowa, and there’s a lot of excitement with that, knowing that the event you’re putting on really has a huge impact on the region economically and educationally.”

Taking the fair into the future means keeping some basic things in mind.

“In order for the fair to be able to continue (its success), it needs to evolve and stay relevant,” Parsons said, pointing to the announcement that the fair will now feature beer sales at selected grandstand events. “Many people say they are thankful we are a ‘dry’ event (that supports) a family atmosphere, but at the same time — especially in the grandstand area — the world has changed on what people want at concerts.”

If people want a beer at a concert and can’t get one, Parsons said they might go somewhere else to get that experience.

“It’s as much a social thing as it is a new revenue stream for the fair,” he said. “It takes the pressure off of other issues of the fair if we can create new revenue streams, and in this case, still give people what they want when they come to the fair.”

Beer sales have been discussed for many years by the fair board, but it has not been acted upon mostly because of tradition.

But Parsons said times are changing.

“Concerts are now more social events, and part of that experience for many concert goers involves having a beer while they are at the concert,” he said. “If that is a relevant social experience in today’s world, then we need to provide it.”

He added that beer will only be allowed at selected grandstand events, and that they will not be able to leave the grandstand with beer in hand.

Parsons thinks the CCF continues because of tradition more than anything.

“Fairs are rooted in our society, which is agriculture, so it has good roots,” he said. “Fairs are places where people are learning, and they are also showcases. It’s an opportunity for every person to bring their best (of whatever) and show it off. It sets fairs apart from festivals. Even vendors; they’re bringing their best products to the venue.”

One of the most recent changes to the fairgrounds was the demolition of the two-story Agriculture Building, which was one of the original buildings left on the grounds from the fair’s beginning. The new Tower Gate Pavilion was built in its place, and those who inhabited the Ag Building over the years were dispersed throughout other buildings on the grounds.

“It was a historic building, but the fairgrounds has always evolved,” said Parsons, adding that the building no longer met safety codes and was not handicap-accessible. “It had outlived its useful purpose here, and it only had one use all year, for nine days during the fair. Any buildings we build now on the fairgrounds need to have multiple uses so they can be used all year.”

It can be a challenge to meet all the needs and wants of fairgoers.

“Fairs are interesting,” he said. “Half of your fairgoers every year are coming for the traditional aspect and don’t (want us to) change anything … (expecting to see the same people and things each year). The other half of the fairgoers say if the fair is the same as it was last year, they’re not coming back. So the challenge is finding the balance. I think I can confidently say part of the reason the fair has continued to grow in the last hundred years and maintained its status as the ‘World’s Greatest County Fair’ is because we have managed those two groups well; keeping traditional aspects while evolving with the times.”

While today’s fairs focus on the past more than they ever have, it’s important not to lose the “cutting edge” aspect of creating fairs that people want to attend, Parsons said.

“Television, to people in Clay County, was introduced here at the Clay County Fair,” he said. “Fairs also need to be showcases of the latest and greatest. Today you can also buy your grandstand tickets at home or buy them at the fair office and scan your phone. There are online entries for livestock shows. The fair needs to keep evolving.”

The target audience for a fair is from age 2 to 92, and that change is welcome to some more than others.

“Some of the changes we make are not liked by the older demographic because it’s a change,” he said. “But someday, today’s young people will be that older demographic, so you’re going to have to make that change sometime. It’s about balancing. The fair would have peaked 30 years ago if it had not been able to adapt and change.”

While the Clay County Fair’s board has worked to keep it relevant over time, that also means making tough choices.

“Anytime you move things around, that’s an exciting change. You’re not eliminating anything,” he said. “But a hard change is anything that affects somebody’s pocketbook — increases in rates for admission or parking or livestock entry.”

He said though those decisions are hard, “the cost of us doing business continues to go up. So it goes back to fairs being caught in these ‘time warps’ in peoples’ minds, and people maybe don’t think about fairs needing to run as a business and evolve and change with the times.”

Parsons said the fair board works hard to continue expanding free entertainment options, and in doing so, has eliminated more parking on the fairgrounds to allow for more of that, along with an expanded show of ag equipment exhibits.

For the love of the fair

Parsons said while fairgoer expectations have changed, with 66 departments — 15 of those being new within the last year — it’s encouraging to him that even as the fair changes, people will step up and get involved.

He cited Grandpa’s Barn, a newer fair attraction, as one department keeping the fair fresh.

“Twenty years ago, who knew we needed a place to teach people about agriculture?” he said.

Looking to the future, Parsons said it is a constant need to stay current with technology, because that’s where people are today.

But the trick in keeping the fair relevant also rests in trying to take a glimpse into the unknown.

“We think, ‘What will northwest Iowa look like in 20 years?’ especially from an ag perspective, and especially if 4-H numbers decline, with fewer farms around,” said Parsons.

One of the projects on the horizon will be the construction of new cattle facilities.

He added the CCF is the largest farm machinery and equipment show in the nation, and when companies continue to buy each other out, it affects exhibitor space on the fairgrounds.

The fair board fair association will work to keep the fair a place where families and friends can gather and enjoy their time together.

That’s what Parsons enjoys the most.

“Families need to spend more time together, and the fair offers a safe place to do that,” he said.