-Photo by Kris Walker
Brokaw Supply has ample shop space for assembly and fabrication of fertilizer application equipment, tillage equipment, as well as service and repair. 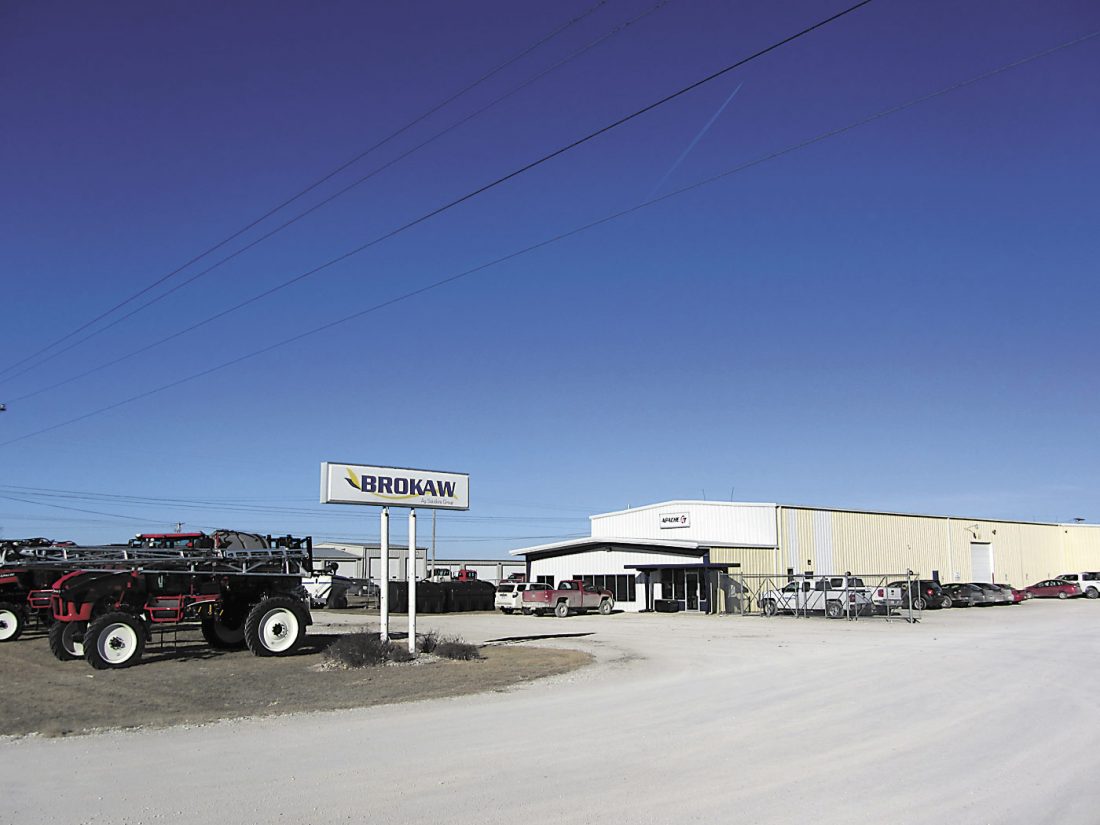 FORT DODGE — Any mention of Brokaw Supply to growers over a cup of coffee at the local haunt in north central Iowa and talk often turns to anhydrous applicators, Apache sprayers and strip-till bars.

However, the folks at the coffee table might not realize that the company on the east side of town also boasts a broad range of equipment bearing familiar names like Kubota, Polaris, Miller-New Holland, Blu-Jet, Kinze, Westfield, Yetter, and Salford; that the company has recently expanded its parts department into a retail shopping store in Fort Dodge and ships parts nationwide through its two e-commerce platforms, competing with retail Goliath Amazon; or that Brokaw Supply has been a cornerstone of the Fort Dodge business community for more than 60 years.

A seed planted in a different time

Although Bill Brokaw, Sr. had successfully operated the Fort Dodge branch of the Hamilton Company — a farm supply business based out of Cedar Rapids — he was anticipating the return of his son, Bill Brokaw, Jr., from a Navy ROTC commitment in 1958 and was exploring his options. Together with Sig Estlund and Tom Brainerd, he started his own business on land owned by the Chicago Great Western Railroad on the square in downtown Fort Dodge at the corner of 12th and Central. 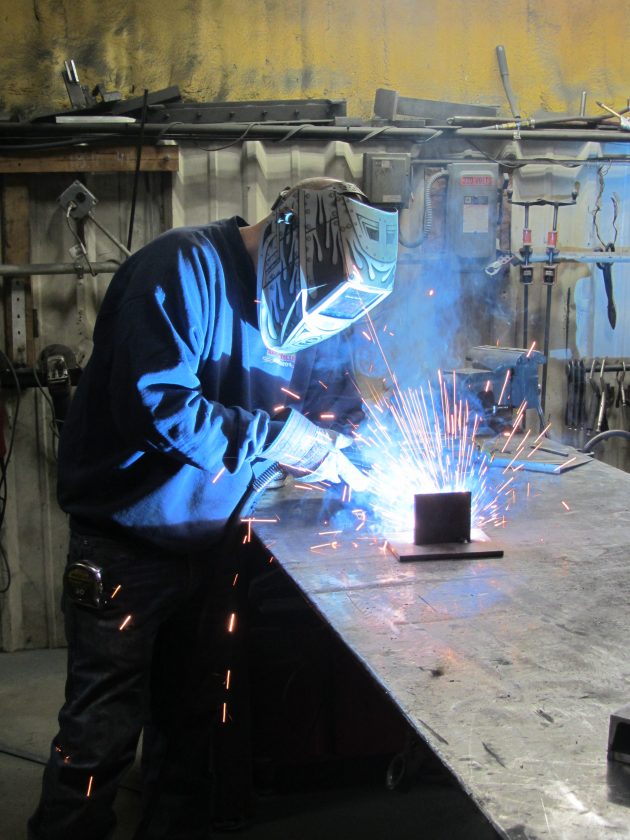 -Photo by Kris Walker
Brokaw Supply has ample shop space for assembly and fabrication of fertilizer application equipment, tillage equipment, as well as service and repair.

The Brokaw Supply team pursued relationships with area hardware stores, implement dealers, cooperatives and elevators originally offering Midwest wagon box hoists, a variety of forage seed, Riverdale chemicals, a range of pull-type sprayers, and other farm supplies and parts. These early connections forged lifelong friendships which would stand the test of time and turbulent agricultural economic cycles. The railroad soon sold the land on which the company operated and Brokaw purchased a former furniture warehouse on nearby North 21st Street, where the business would remain for nearly 50 years.

By 1960, Bill Brokaw, Jr. had completed his military commitment, married Jerita Douglas, and formally joined the company. In these early days, rural communities in Webster and surrounding counties commonly housed a local independent grain cooperative, perhaps a small hardware store, and larger communities might include an implement or equipment dealer.

“Those distributors and customers we worked with became friends for life,” Jerita Brokaw said. “Those were good days.”

The coming 20 years would dramatically change the economic landscape served by the Brokaw family. While some of the local feed and grain cooperatives would remain, much of the management and ownership of those cooperatives integrated vertically; others would close entirely. The implement business paralleled the business paradigm shift.

As the breadth of the acres under management grew and the number of operators shifted, the product line-up at Brokaw followed suit. While the company continued to sell sprayers, the size and technology on board evolved to 1500 gallon TryCo self-propelled units on three wheels. The advent of anhydrous ammonia for nitrogen application launched the company into the fertilizer implement industry and soon Blu-Jet sales and service bolstered the portfolio. 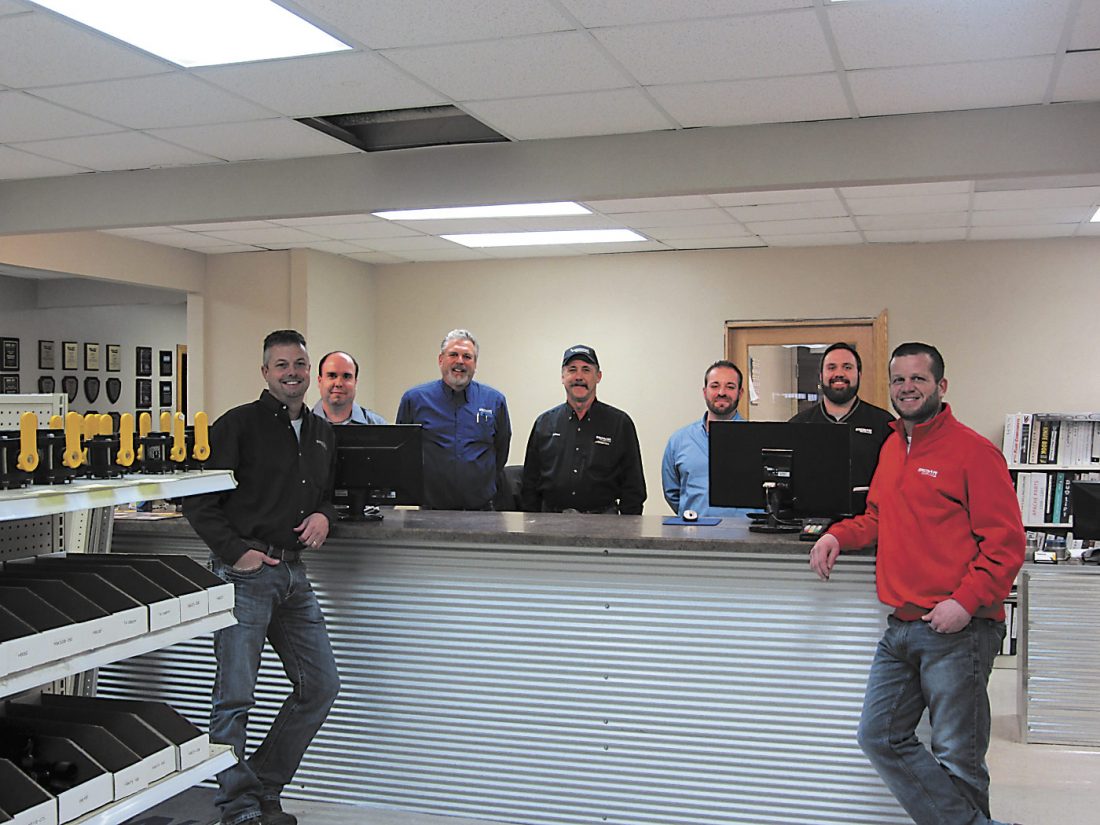 By 1985, Bill Brokaw, Jr. had taken the reins of the company although Bill Brokaw, Sr. remained a regular fixture in the office. In 2001, the business was sold to Bruce Vandagriff who would carry on the Brokaw tradition after Brokaw, Jr.’s retirement later that year. A testimony to their commitment to the business and its clientele, each leader remained throughout the transitional period to navigate the change, cementing the company values through the organizational shift.

Reaching for the sky

Although anhydrous application equipment and sprayers remained central to the company’s core enterprise, Brokaw Supply began to reinvent itself again in 2008 when Bruce Vandagriff sold the business to another father and son team, Gary and Dave Nelson. With a vision for the future, the new owners soon realized that the downtown location that had served the company for nearly a half century was limiting their ability to properly serve Iowa’s agriculture industry on a larger scale, both in physical size and sheer quantity.

On the east edge of town, the former Chief Industries grain bin manufacturing facility became available and provided the ideal layout and foundation for growth and logistical fit for Brokaw Supply’s future. In 2009, the company left the center of town for a home more conducive to heavy equipment and semi-trailer traffic on old Highway 20, just 1.5 miles east of Fort Dodge.

With the expansion in physical capital, the company also invested in its human capital. In the period from 2008 to 2013, the Brokaw team bloomed from the original four employees to nearly fifty full-time employees, including a sales manager and general manager. In 2010, full-time employees were offered comprehensive benefits packages. With the facilities in place and clear investments made in human resources, Brokaw Supply was positioning itself to further attract and retain exceptional talent on all levels.

“Your company is only as good as its employees,” Dave Nelson said. “It has always been our philosophy to hire people who are better than we are, and who are experts in their fields.”

During this transformational time, the equipment and implement offering was also undergoing a massive rebirth. While traditional fertilizer application implements remained a staple of the Brokaw Supply wheelhouse, the company followed an uptick in the demand for Blu-Jet equipment as minimal tillage, or strip-tillage, units–enhanced by advances in Global Positioning System Technology and federal cost-share programs. Apache self-propelled sprayers became a successful addition to the sales line-up in 2010. Bulk soybean facilities also became a specialty for the company and grew to become a business model servicing the four-state area.

The team-focused management style allowed general manager, Dave Nelson, the capacity to shepherd the company into the technological revolution in agriculture and carve a niche for Brokaw Supply be a leader well into the age of site-specific crop production.

As growers themselves, he and Gary Nelson field-test the equipment they offer to their customers, providing real time feedback to their sales department, to the shop floor and directly to customers. As geospacial data became readily available, a quick shift in the ability to variable-rate apply fertilizer to targeted acres allowed Brokaw Supply–who had already designed the equipment for such control–a competitive edge and further propelled them ahead of their peers in the industry, coaching Iowa fertilizer dealers to deliver the capacity on to their customers.

Branching out beyond Fort Dodge

“If you are doing the same thing every day and maintaining status quo, you are on your way to being obsolete,” said Dave Nelson.

While Dave Nelson respects the foundation upon which his company was built, he also recognizes that it couldn’t have stood the test of time and will not compete in the dynamic agricultural industry of tomorrow by resting comfortably on its laurels.

Nelson cut his teeth in business with Monsanto and Ziegler CAT prior to returning to the his family farm in the Fort Dodge area, purchasing Brokaw Supply together with his wife, Fonda, and parents, Gary and Karma Nelson.

Those ten years in mainstream corporate agriculture not only instilled in Nelson the rudimentary components of business management-budgeting, goal-setting, metric evaluation-but also challenged him to explore beyond tradition and rethink what has always been the rule. He does not allow himself to be intimidated by the competition-but inspired by it, “In business, like sports-surround yourself with people who are better, smarter, faster than you,” he said.

Having a finger on the pulse of their market demographics, Nelson and his sales team identified an intersection on the map of Minnesota where an opportunity for a branch office could serve the bulk of the western and southern thirds of the state. In 2014, Brokaw Supply constructed a new location in Redwood Falls, Minnesota duplicating its efforts.

They sent Fort Dodge team member, Robert Varland, up to Minnesota for two years as he guided the new store through its inaugural years. Most recently, the Redwood Falls team bolstered their equipment offering with the addition of Polaris and its full line of recreational and utility vehicles to the Brokaw lineup in 2016.

The equipment portfolio and geographic reach of the company further strengthened for the future in 2015 when Brokaw Supply orchestrated a merger with Riggins Ag Equipment of Missouri. Like a long lost brother, Riggins Ag Equipment began from a similar shop in Marshall, Missouri, as an independently-owned family business and paralleled the Brokaw story in its growth and product development. Riggins Ag Equipment was purchased by Summit Equity Group in 2005 and experienced exponential growth through expanded locations in Concordia, MO, Mead, NE, and Hastings, NE and supply a wide variety of planting, custom fertilizer and chemical application equipment, parts and service.

The expansion didn’t end with the merger. In 2016, Ag Solutions group purchased the Kubota of Omaha dealership, adding yet more diversity to their portfolio of ag companies. Ever-cognizant of development in his marketplace-which was headed to the internet, Nelson and his partners sought out a storefront in the virtual world. In 2017, Ag Solutions Group purchased a small e-commerce retail platform, branding it Barndoor Ag and has since cultivated the business into a major retail shopping platform competing daily with Amazon.

“We have the ability to sell parts and consumer items out the front door to our traditional walk in customers and now we are shipping products worldwide out our back door to our Barn Door Ag customers,” Nelson said.

The fruits of labor fall close to home

The concept proved both practical and forward-thinking. Local growers and ag retailers alike recognize the familiar Brokaw Supply name and trust the team they meet at the door, but under the greater Ag Solutions Group, the Brokaw team has access to a complete top-to-bottom list of equipment, full parts catalog, and top-notch service resources at their fingertips.

Newly completed this winter, the parts and sales crews at Brokaw Supply have re-invented their business model and have completely renovated the showroom floor into a farm parts store. A bright, welcoming retail space greets folks as they enter the store to find a complete line of Banjo valves and fittings, TeeJet sprayer nozzles of all shapes and sizes, sprayer pumps for sprayers big and small, a wide array of precision farming products, and a smattering of other things just plain handy to have around the farm or yard–right there at their fingertips.

With the arsenal of resources made available through the larger Ag Solutions Group family of companies, the local team understands the products they service and sell yet has complete access to the greater equipment and parts umbrella.

“We don’t just have the parts you need, we have the knowledge to go along with it,” said customer service representative, Steve Tracy.