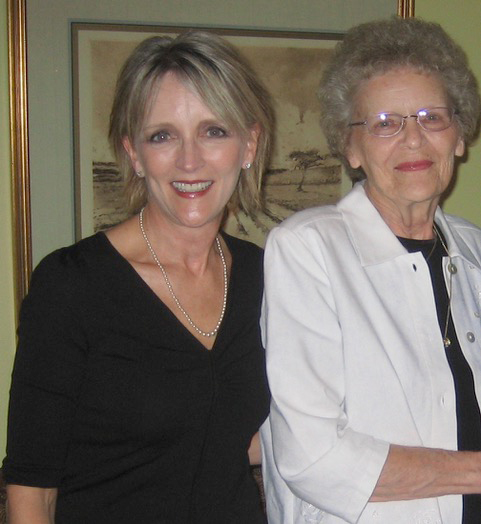 Her career in news and corporate communications took her from Iowa to Missouri to Virginia to Washington, D.C., and San Francisco, but throughout her journey, Evelyn Dalton kept strong ties to her roots of growing up on a farm near Emmetsburg — and she’s applied those roots to those she mentored.

Whether applied to a news story or corporate news release, that’s the teaching term she used in her work for The Associated Press, a worldwide newsgathering agency; for public relations and marketing giant FleishmanHillard, and for her own company, Dalton Media. “Mom” refers to her mother, Lois Quam, an avid newspaper reader and consumer of news through most of her 91 years, who died last Sept. 11.

“My mom loved news and up until the week before she died, she could tell you what happened in the last hour in national news. So tell me your story and why is it mom friendly?” she would ask those she mentored. “Why should they care? It was a good centering reminder that these are the people we are really trying to reach. When I was writing broadcast for the AP and then coaching other broadcast writers, the story had to be mom friendly — written in a way people could understand if they weren’t in a newsroom. My corporate clients would often get lost in industry verbiage that was not mom friendly. I would remind them they needed to think about a mom in Iowa who might be interested in a story — and that if she couldn’t understand their language, the industry jargon, then it doesn’t really matter.”

As a communications coach and public relations counselor, Dalton has worked with executives from dozens of companies, ranging from startups to the Fortune 50, as well as executives from associations and government agencies. Her training sessions include coaching in message delivery, media interview techniques, presentation skills and crisis communications.

She and her husband, Rob Dalton, make their home in the San Francisco Bay area.

Dalton is the oldest of four daughters of Lois and Norman Quam, both of Norwegian heritage, who harvested corn and soybeans and raised cattle and hogs on a farm five miles north of Emmetsburg. Her mother graduated from Emmetsburg Community High School in 1946 and attended teacher training in Spencer before teaching country school in Vernon Township. She stopped teaching when they were married in 1949.

All four girls grew up on the farm and graduated from high school in Emmetsburg. Today, they are scattered throughout the western half of the country: Evelyn in Danville, California; Norene in Wilsonville, Oregon; Diane in Silverdale, Washington; and Dori in Sioux Falls, South Dakota. Their father died in 1985 at the age of 61, and her mother left the farm and moved into Emmetsburg.

Her parents were avid newspaper readers, subscribers to the Emmetsburg newspapers and the Des Moines Register from the time they were married, and listened daily to news on Spencer’s KICD radio station.

“My sisters and I knew conversation in the kitchen had to stop when the news, farm reports and weather forecasts came on,” she said. “Mom watched Sioux City and national TV newscasts every day, and CNN was usually on throughout the day.”

Dalton got a first taste of journalism as editor of her high school yearbook and member of the newspaper staff.

“At my high school, I had two really great English teachers — Leta Dinges and Kathryn Bailey — who influenced my career” she said. ”A small high school did not limit my opportunities. Mrs. Bailey was adviser to the yearbook and newspaper staff.

“I have loved the printed page forever, I loved to read. I attended Emmetsburg Junior College (now Iowa Lakes Community College) my first year, and then when I got to Northwest Missouri State, a journalism instructor helping people register, Opal Eckert, said, ‘Why not take a journalism course?’ And that was the beginning of my career.”

After graduating in 1973 with a bachelor’s degree in English and journalism at Northwest Missouri State, Dalton returned to Emmetsburg and began her news career at the Reporter/Democrat, a twice-weekly newspaper. Her first position was as society editor – “my first assignment was to call families to see who they had as their guests at their graduation parties.” She still subscribes to both newspapers by mail, a gift from her parents.

From Emmetsburg, she moved to the Spencer Daily Reporter as a general assignment reporter and photographer. She left the paper to teach English and journalism at Spencer High School and a course at Iowa Lakes for five years, then moved to the St. Louis area and taught at Ladue High School for five more years. She was the school newspaper adviser at both high schools. In 1985, “I decided to do what I was teaching my students to do. My fingers were itching to get back in the business.”

She applied for a position with AP and was hired in Richmond, Virginia., where she was named broadcast editor. She then moved two years later to Williamsburg to become a public relations manager for Colonial Williamsburg, the world’s largest living history museum, and its hotels, restaurants and golf courses.

Dalton returned to the AP in its Washington-based Broadcast News Center, where she was director of station services and then assistant managing editor. There, she met her future husband, Rob Dalton, who was in sales after earlier work as an AP bureau chief. When he left AP to work for the Reuters news agency in northern California, AP allowed her to relocate to its San Francisco bureau where she supervised staff in Washington and became a broadcast writing coach for bureaus around the country.

She moved to FleishmanHillard’s San Francisco office in 1998 and was named a vice president.

“It was a great time in the public relations business with the explosion of the number of tech companies. My job was media training, coaching executives on how to be interviewed and tell their story in a succinct way for someone outside the business to understand,” she said.

When her husband retired in 2000, she decided to start her own business and took on clients that included Owens Corning, Yahoo!, AT&T, Kellogg, Cargill, Clorox, Ancestry.com, the 49ers, McAfee, Intel, Nestle, UPS and Special Olympics.

“The focus — all media training, helping them learn how to deliver the company message, how to handle different messages. The people who are best interviewees will get back to their company story. I would prepare for a session by writing a list of 50 questions, having trainees rehearse how they would answer, so on camera or in a live interview, they could articulate the company’s message.”

Dalton closed her business in 2018 and today she is involved in pro bono work with nonprofit organizations. She enjoys gardening, yoga and international travel with her husband, who are in a statewide stay-at-home order in their home due to the coronavirus pandemic. Asked the advice she’d give on how to react to the pandemic, she said “stay informed but choose your news sources carefully. Look to experts who provide clear, concise information supported by facts and statistics. Trust those who have the courage to tell the truth, the humility to say they don’t know when they don’t know, and the ability to show genuine empathy.”

And make what they say is Mom Friendly.

“My advice to corporate clients and AP broadcast writers was to visualize who they were talking to — a neighbor, a friend who doesn’t work in the same industry, a family member,” she said. “For me, that was mom. People want to know what’s new, why they should care, and where’s the proof. Using everyday language even to explain complicated things helps people understand and keeps them engaged.

“I’m proud of my Iowa roots. When I experienced ‘pinch me’ moments in my career, my grandmother’s compliment was always ‘not bad for a little farm girl from Iowa.’ I attribute my success to the Norwegian work ethic I inherited and the luck of the Irish from growing up in Emmetsburg. To this day, when I spot someone wearing an Iowa T-shirt anywhere in the world, I often walk right up and ask where they’re from. I once left an “I’m from Iowa too” note on the windshield of a car parked in Rosarito, Mexico, because it had an Iowa license plate.”

COVID-19 has clinical and financial implications for Iowa hospitals

Rightfully, most attention now is on the front-line care Iowa hospitals are providing for patients stricken with ...

Even without traditional events, Iowans will still remember the fallen

This Monday is Memorial Day. In ordinary times, this weekend would bring parades and community events. It would ...

When I moved back to Fort Dodge last summer after nearly a decade away, going to college and living halfway across ...

You decide how to vote. We’ll make it safe and secure.

Our national dialog is consumed with discussion about health, safety, freedoms and liberties. There is no doubt ...

When she was growing up in Fort Dodge and things would go wrong, Joanne Kersten Hudson recalls the simple, direct ...