The two have been intertwined for almost 150 years

-Messenger photo by Hans Madsen
The United States Gypsum Co. plant on the south side of Fort Dodge is a collecion of buildings where raw gypsum is processed into various materials. 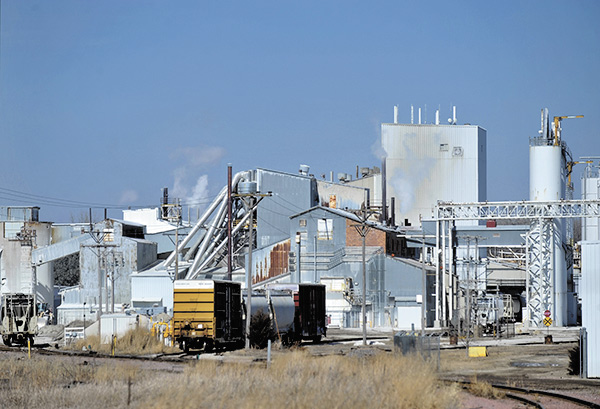 -Messenger photo by Hans Madsen
The United States Gypsum Co. plant on the south side of Fort Dodge is a collecion of buildings where raw gypsum is processed into various materials.

On the Earth’s surface, the community was formed from an abandoned Army fort along the Des Moines River amidst the fertile soil of northwest Iowa. Underneath that soil, deep underneath, workers mined gypsum from one of the purest deposits of the mineral in the world.

“Gypsum runs in our blood,” said Matt Bemrich, mayor of Fort Dodge since 2010 and owner of Bemrich Electric & Telephone. “Both the mining and processing of gypsum have generationally been a great economic benefit to our community. You have generational families that have all worked for this industry. In my electric business, I work with all four companies, just as my dad and my grandfather did. Other than our agriculture-based economy, the next most abundant resource is gypsum. For 100-plus years, we’ve found ways to capitalize on that.”

Three years after Fort Dodge was chartered in 1869, the production of gypsum in Iowa began when George Ringland, Webb Vincent and Stillman T. Meservey formed the Fort Dodge Plaster Mills to mine, grind and prepare gypsum for commercial use. The company constructed the first gypsum mill west of the Mississippi River, at the head of what is now known as Gypsum Creek. Gypsum formed in the area about 145 million years ago, during the Jurassic Period, and miners began extracting it for wall plaster, insulation and fertilizer.

Today, as an indication of the city’s importance in the industry, four of the major companies in the United States involved in gypsum mining have operations in Fort Dodge — CertainTeed (once known locally as Celotex), Georgia-Pacific, National Gypsum Co. and United States Gypsum Corporation (USG). As of last summer, based on surveys of each, the four companies had a total employment of 369 employees, according to Dennis Plautz, chief executive of the Greater Fort Dodge Growth Alliance.

In 2020, the gypsum industry is expected to add $369 million to the Webster County economy, according to a study by Dr. Ernie Goss, an economist at Creighton University who works with the Greater Fort Dodge Growth Alliance.

Furthermore, Goss’s study reported, “the gypsum industry in Webster County supports 976 jobs each year. Every 100 gypsum industry jobs support an additional 112 jobs in spillover or linked jobs. For example in 2020, the gypsum industry will support 44 jobs in truck transportation industry and 37 jobs in wholesale trade. A high proportion of the jobs supported are high-wage jobs. In 2020, each gypsum manufacturing job is paid an average $84,845, each gypsum extraction job earns $72,530 on average, each truck transportation job is paid an average $54,332 and each wholesale trade job is paid $57,528 on average. Additionally, the gypsum industry generates significant state and local tax revenues for the county and region. In 2020, the industry will produce $8.2 million in state and local taxes.”

Underground mining of gypsum has been replaced by quarry mining over thousands of acres. The four companies own the land itself or own the mineral rights on the land on which they operate. National’s quarry is located northeast of Fort Dodge while the quarries of the other three are in the southeast area of the city.

“The area itself is very friendly to the industry,” said Kevin Richardson, USG plant manager since 2006 who oversees a work force of 130. “It’s unique that there are four of the major building industries here. Obviously, there is competition here. We’re all looking to be the industry leader. We’ve been hiring on a regular basis. I think we’re a solid employer here in town.”

Richardson’s company, USG, was formed in 1902, when about 20 gypsum companies including the Carbon Plaster Co. of Fort Dodge came together. Twenty more companies joined the next year — including Duncombe Stucco Company, the Iowa Plaster Association, the Mineral City Plaster Co. and the Fort Dodge Plaster Co., all based in Fort Dodge. Soon, a network of gypsum mines, quarries and processing plants spread across the United States.

Gypsum products from the Fort Dodge plants are shipped throughout the United States and into Canada. The best-known use of gypsum (calcium sulfate) is as the principal ingredient in the manufacture of gypsum board, also referred to as wallboard or drywall. As an inert compound containing 21 percent by weight chemically combined water, it provides buildings and homes with passive fire resistance, according to the Gypsum Association.

Beyond board, gypsum has many uses. It is used as a soil additive to improve the soil’s workability and receptivity to moisture, and to overcome the corrosive effect of alkalinity; as an additive to turbid water, particularly ponds, to settle dirt and clay particles without injuring aquatic life; as a food additive recognized as acceptable for human consumption by the U.S. Food and Drug Administration for use as a dietary source of calcium, to condition water used in brewing beer, to control the tartness and clarity of wine, and as an ingredient in canned vegetables, flour, white bread, ice cream, blue cheese, and other foods; as a color additive for drugs and cosmetics, and as a primary ingredient in toothpaste. Before the era of computers and high-tech special effects, film and television producers would drop “showers” of gypsum in front of the cameras to simulate snow.

After gypsum companies have fully mined a quarry, the remaining soil is reconstructed into open fields, rolling hills and cliffs that are not always suitable for crops or development.

An old open pit mine just south of the city is used as a landfill owned by the North Central Iowa Regional Solid Waste Agency. The location handles solid waste from Fort Dodge, Humboldt, Webster City, Manson, Rockwell City and other communities.

Land once quarried primarily by USG, along with parcels from National and Georgia-Pacific, is home to the Gypsum City OHV (Off-Highway Vehicles) Park — a state park — located in the southeast corner of Fort Dodge. The park, opened in 2004, is approximately 800 acres in size and includes 70 miles of trails for use by ATV’s, side by sides and off-road motorcycles. The park also includes a 1.5-mile motocross track, a .4-mile kids’ track, and a beginner circle track. Trails within the park range from open prairie for novice riders to heavily timbered areas for more advanced riders and include water crossings and mudding areas. Plautz said usage has grown in the past four years and now includes a campground served with water, electricity, sewer, picnic tables and grills, along with men’s and women’s showers/restrooms. More recently, tiny houses have been added for rental by campers at the park. They are constructed through a program that pairs Iowa Central Community College instructors with inmates at the Fort Dodge Correctional Facility.

Said Bemrich, “It’s kind of an interesting segue that generations of Fort Dodgers once worked that land pulling minerals out of the ground. It’s a bittersweet revelation of what could have ended up as a wasteland.”

Gypsum from the Fort Dodge area was used to create one of the great hoaxes in U.S. history. In the 1860s, New England native George Hull traveled to Fort Dodge and purchased an acre of land along Gypsum Creek. He hired local quarrymen to excavate the largest block of gypsum possible (about 2 feet thick, 4 feet wide, and 12 feet long) and shipped it to Chicago where sculptors carved it into the form of a giant man. They scoured it to remove the chisel marks and “aged” the figure by pitting it with needle-tipped hammers and discoloring it with sulfuric acid. Now appearing very old, the sculpture was shipped to upstate New York and secretly buried on a farm near Cardiff. A year later, while digging a well, the “petrified man” was “discovered” and proclaimed the “eighth wonder of the world.” Despite being quickly identified as a hoax, the Cardiff Giant went on tour, earning Hull about $20,000. The giant came home to Fort Dodge for display between 1913 and 1923, and then was returned to New York where today it is on exhibit at the Farmers Museum in Cooperstown. Fort Dodge didn’t have the money to buy it, so sculptor Cliff Carlson was hired to carve an exact replica for $2,100. The replica is displayed at The Fort Museum and Frontier Village in Fort Dodge.

“The student section at football and basketball and any home event is the ‘Mine Squad’ and that’s the kids sitting in the mine, basically,” said Eric Hoveland, student services liaison at Fort Dodge Senior High School.

“What’s a ‘Dodger’? — “A ‘dodger’ had to light the fuse of the dynamite and then dodge the explosion,” the district said. “He was the miner who was the last man out. He exemplified courage, toughness, grit and a will to survive and thrive by working hard to beat the odds. These characteristics continue to represent our Dodgers today.”

There are other gypsum and mining ties in the city. In the summer of 2019, Fort Dodge joined the local Pioneer Collegiate Baseball League with a team called the Gypsum Miners. Mineral City Mill and Grill is a Fort Dodge restaurant with a plethora of mining-related photos on its walls. And there’s the Mineral City Speedway Race Track. Gypsum was used for landscaping at the Greater Fort Dodge Growth Alliance building, to “help us remember our heritage,” Plautz said, and PICA (Pride in Community Appearance) volunteers have used it as part of its landscaping on other public properties.

“The other day, I was out at Village Inn having breakfast with my oldest son,” Bemrich said, “and there was a table nearby with 20 men and women, all who once worked for Celotex, who meet once a month. It was not only a place where they once worked, but also where they built lifelong friendships. Gypsum may be a rock in the ground but it’s more than just a financial thing.”

How long will the supply of Fort Dodge gypsum last? When National Gypsum announced several years ago its move to a new, nearby location, then-plant manager Greg Berry said “we’re going to be set for the next 40 years on this land.”

Said USG’s Kevin Richardson, “We’re secure at the current extraction rate for many years moving forward. There are rumors around town that places are running out of gypsum. There is plenty.”