Olson’s harp music brings comfort to the dying, their families 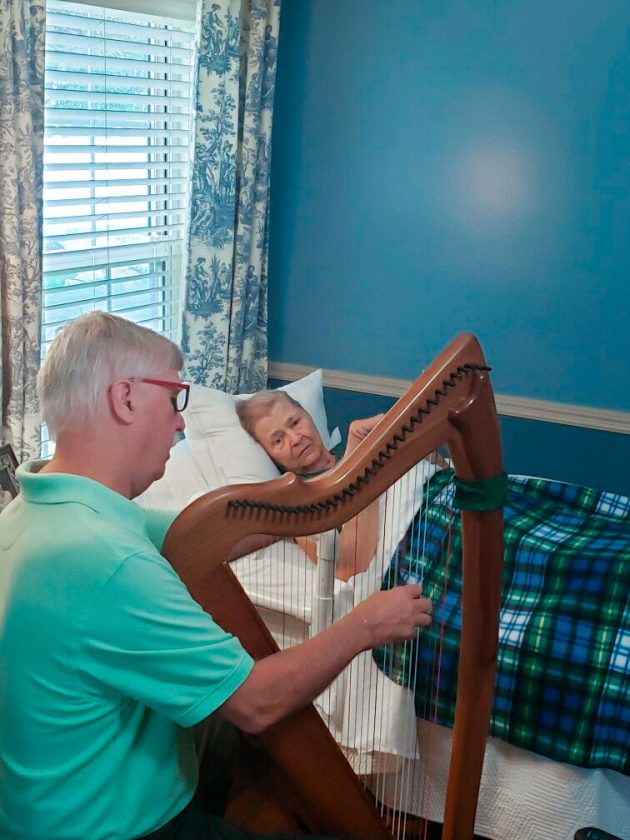 Plucking the strings of his harp, a musical instrument that is one of the oldest known to man, Dayle Olson brings peace and comfort to the bedsides of those who are in their final stage of life. His music is often the last sound they will hear.

Olson is a harp therapist – trained to memorize and effectively improvise music and how to find each person’s resonant tone, a frequency that feels most comfortable to us. He is certified as a practitioner after completing a 28-month International Harp Therapy Program. He lives in Merritt Island, Florida — best known as home of NASA’s Kennedy Space Center – and estimates that over the past 11 years, he has played at the bedsides of more than 2,500 people at two local hospice houses and a hospital oncology unit.

Olson draws on his experiences growing up in Fort Dodge. Some were tragic — the deaths of his brother and sister at young ages — and others uplifting. All were life-changing and contributed to his volunteer avocation that started in full after Olson retired in 2012 as president and CEO of the Brevard Achievement Center, one of Florida’s largest non-profit facilities providing services to children and adults with disabilities.

“I am asked frequently about playing music for persons who are in the process of making their final transition,” Olson said. “I realize this is not something everyone is comfortable with. Death is not a comfortable topic for many or a subject for a party conversation. I see it differently. My thinking about death and its impact on a person goes back to when I was a young Fort Dodger. When I was a high school sophomore, my brother, Roger, stepped on a land mine while serving in Vietnam. Then, less than five years later my sister, Marilyn, was hit by a car while walking with her friend north of town. Unfortunately, I learned about death and its emotional and physical effects on the survivors. As an adult I realized there must be ways to provide comfort to those who are dying – and also for those who are living.”

When his mother was stricken with cancer, Olson said that “during her treatments and times of discomfort, I noticed she became more relaxed and didn’t use her pain medication when she was listening to music.” He found articles discussing the benefits of the harp and ordered a do-it-yourself harp kit. Once built, he started taking lessons. “My life of playing music at the bedside just started to fall into place. Today, I own 11 harps. The harp I take to hospice has 36 strings and weighs 17 pounds so it’s easy for me to get in and out of a patient’s room.”

The earliest harps were developed from the hunting bow. Wall paintings of ancient Egyptian tombs dating from as early as 3000 B.C. show an instrument that closely resembles the hunter’s bow, without the pillar found in modern harps. The specter of angels playing harps apparently originates in the Bible’s Book of Revelations.

“I think that in general we see angels as providing comfort and security,” Olson said. “We hope that angels are watching over us and making sure ‘all is good.’ To me, the calming music of a harp can do the same thing. When you pull the strings on a harp and hear the overtones — the other strings that vibrate along with the string you just played — an environment of calm and comfort is created. Listening to harp music that is improvised to meet the needs of an individual creates an environment we call a cradle of sound. It’s that environment where ‘all is good’. When I am playing for a patient, it is always my goal to create that cradle of sound that allows for physical, emotional and spiritual calm — like an angel does.”

Olson prepares carefully for each patient and family for whom he plays, usually in a session lasting 40 minutes to an hour.

“Before I enter a patient’s room or their home, I have been briefed by the hospice or hospital staff on the patient’s diagnosis, current situation and who may currently be with the patient. As I prepare to meet the patient and others, I clear my head as I have no idea of the current situation with the patient and family. Entering the room, I focus on the patient — are they alert, asleep, resting quietly, showing signs of anxiety or being uncomfortable? Are there others in the room with the patient? I introduce myself to anyone in the room and explain who I am and what I will be doing. I want to be sure those in the room realize this is not a bedside concert – it is a bedside vigil, a time for calm, comfort, reflection and for some a time of prayer. It is a time to quiet the surroundings.

“I walk to the bed, touch the patient and introduce myself. I know the patient hears me, no matter their current situation. I ask visitors to find a comfortable place to sit. Frequently the family will gather around the patient’s bed. I position myself with the harp where I can see the patient’s face and their breathing. I slowly pluck harp strings looking for the signs that tell me I have found that patient’s resonant tone. I will now play music most appropriate to meet the patient’s resonant tone. I frequently start with the slow Gregorian chant, music those in the room will not recognize. I will then start to improvise a piece of music that will be unique to the patient. I focus on the patient’s level of anxiety and/or discomfort all while I use the patient’s breathing as my tempo of music. As I improvise a piece of music, I will gradually take the tempo of the music to a regular tempo and slow the music. The patient’s breathing will entrain, or follow the tempo of the music (much like when we find ourselves tapping our foot to music without realizing we are doing it). With entrainment the patient calms, blood pressure will frequently stabilize and the level of anxiety leaves the room. I continue to play as the family frequently has eyes filled with tears — realizing their loved one has now entered a calm and sacred space. For many patients, they have relaxed and found a period of time of sleep with reduced pain and anxiety. For other patients, this is a time when they take their last breath.”

Siobhan Masterson, a psychotherapist from Congers, New York, witnessed OIson’s talent last June when he played the harp for her dying mother at a hospice house in Florida. “He came into her room, sat down and started tuning his harp, trying to find her resonant tone. He played in the key of C for my mom 20 to 30 minutes because he said that was her resonant tone. It was so reassuring that she heard such beautiful music. It was a concert for one. She died within three hours of him playing. He helped her die with peace, I really believe that.”

Olson’s love of music came at an early age and was developed during his years growing up in Fort Dodge. Born in Boone to Raymond and Joyce Olson, he was only 12 days old when the family moved to Fort Dodge. His father worked for the phone company and his mother was a licensed practical nurse.

Olson was a sophomore at Fort Dodge Senior High when his older brother Roger, a hospital corpsman with the U.S. Navy, was killed in Vietnam in March 1968 at the age of 20. Fewer than five years later, when Dayle was in college, his 14-year-old sister Marilyn was killed when she was struck by a car while walking alongside a road with a girlfriend.

“When I think of Fort Dodge my head fills with memories,” he said. “Of course, my greatest memories are of my family — my parents and Roger and Marilyn. I was fortunate to be a part of a family where people cared greatly for each other and the importance of good work and the value of all people was taught. … Some of my fondest memories are standing around a tree in Duncombe School singing Christmas songs, high school friends from band and choir — many who I still have contact with today.

“There are people who helped shape my life and are a significant part of my past. Sondra Thorson, Judy Payne and Gail Niceswanger all played a role in my life. They each showed their belief in people and demonstrated that personal hard work will result in good.”

Olson graduated from FDSH in 1970 and attended Augustana University in Sioux Falls, South Dakota, where he started as a music major but finished with a degree in special education, with a minor in biology. After graduation, he returned to Fort Dodge where he worked as a special education teacher in elementary, junior high and high school settings.

He worked part-time at the psychiatric unit at Trinity Regional Medical Center where Thorson was a head nurse. Payne was an English teacher at FDSH and Niceswanger taught drama and directed community plays in which Olson performed. “I learned so much about life just by watching them,” he said. “Everyone had teachers that shaped them and they were two of them.”

Olson moved to Florida in 1982 but retains ties to Fort Dodge through online classes — The Exceptional Learner and Introduction to Human Disability Services — that he has taught at Iowa Central Community College for the past 10 years.

Besides his work as a harp therapist, Olson has completed study to become a Death Doula, someone who provides non-medical assistance to individuals (and their family) who are in final stages of life. “So, this is how the death of my siblings became a part of my life,” he said. “I think if you ‘peel back the onion,” each of us who suffered a sibling death incur long-term effects that are a major part of our life.”