He was at the liberation of Rome 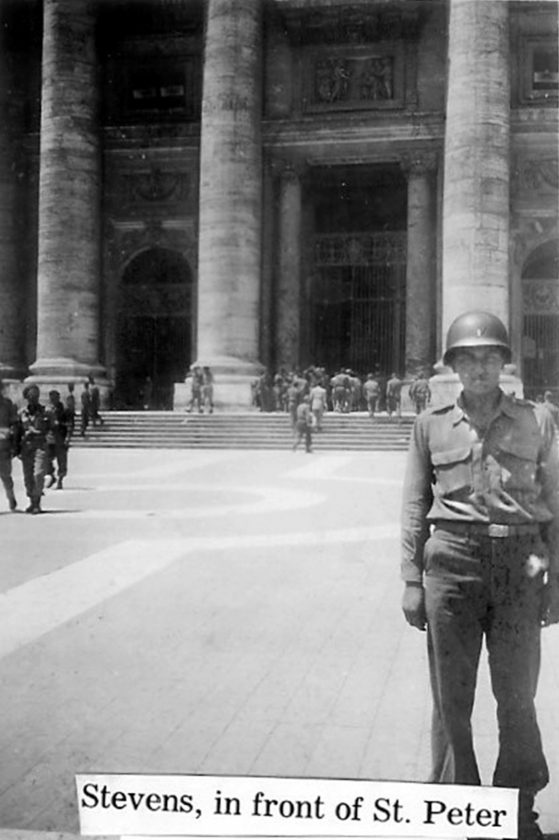 For our 40th wedding anniversary, Linda and I joined my brother Dave and his wife Cheryl for a magical trip to Italy in 2008. Before we left, I asked my dad for advice on food and lodging since he was the only member of our family who had been to Rome — and much of Italy — years before.

“Well, if you don’t mind sleeping in a tent and eating K rations, then I can help,” he said, tongue firmly planted in cheek.

Seventy-five years ago today, my father — Capt. Walter Stevens — was among the first American soldiers, members of the 5th Army, to reach the center of Rome after encountering resistance from German forces on the outskirts of the city.

The liberation of Rome on June 4, 1944, was a time of celebration by the people of Rome who crowded onto the streets to welcome the victorious Allied troops. Rome was the first of the three Axis powers’ capitals to be taken.

Two days later came the Allied invasion of Normandy — D-Day — an event that will be remembered throughout the world today.

Years later, my dad — who returned to newspapering after the war — told me that he and his Army comrades got word of the D-Day invasion while in Rome and before they resumed their drive through northern Italy, France and eventually into Germany.

In comparison to the publicity of D-Day, he said, the liberation of Rome got far less mention. Today, I am told, the situation is much the same. The price paid for their heroism hit home for us when we visited the American Cemetery near Florence where 4,400 are buried — some of them Dad’s own comrades in arms.

Ever the newspaperman he was before and after the war, he took many photos during his 33 months of combat and this photo was one of them — his camera loaned to a fellow soldier who took a picture of Dad in St. Peter’s Square. A proud moment for a lifelong Catholic whose grandparents immigrated from Germany.

Editor’s note: Walter Stevens served as managing editor, editor and editor emeritus of The Messenger for 50 years. He died in 2013. His son, Paul Stevens, wrote this in his memory.

Iowa should invest in natural resources, recreation and water quality

Iowans have a reputation of being hard workers, honest, neighborly, connected to the land and genuinely “Iowa ...