‘Is this Heaven?’ endures 30 years later

-Submitted photo
The site of the movie “Field of Dreams” has become a destination spot for tens of thousands of people each year. “This movie is about redemption, second chances, pursuing your dreams and giving back,” says Roman Weinberg, operations manager for Go The Distance Baseball LLC, which operates the Field of Dreams movie site. 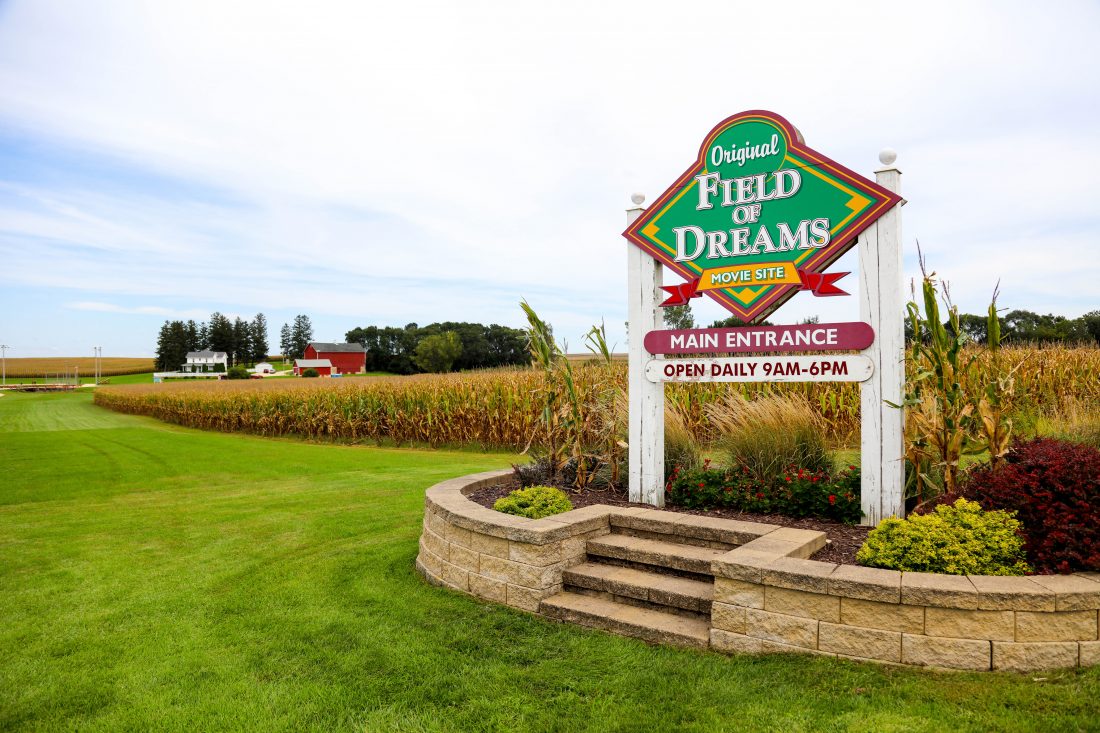 -Submitted photo
The site of the movie “Field of Dreams” has become a destination spot for tens of thousands of people each year. “This movie is about redemption, second chances, pursuing your dreams and giving back,” says Roman Weinberg, operations manager for Go The Distance Baseball LLC, which operates the Field of Dreams movie site.

Back when I was just starting high school, a phenomenon began occurring around my hometown of Lake City and beyond. The phrase “Is This Heaven? No, It’s Iowa,” started popping up everywhere, from conversations to bumper stickers.

Maybe you remember this, too. It was all because of the film “Field of Dreams,” which was filmed near Dyersville and debuted on the big screen on April 21, 1989. Now here we are, decades later. The Field of Dreams movie site is celebrating the 30th anniversary of one of the most beloved baseball films of all time, and I admit — I’m excited.

The event promises a day filled with live music, family activities, tours of the 1906 farmhouse and a softball game under the lights between the Ghost Players and the Iowa Dream Team made up of 30th anniversary celebrities, including sports stars with Iowa roots like Mike Boddicker, Adam Haluska, Tim Dwight, Todd Sears, Tyler Lorensen and others.

To understand the significance of this event, let’s go back in time more than 30 years, when the 1980s Farm Crisis was just starting to loosen its chokehold on rural Iowa. One cold day in eastern Iowa in late December 1987, a volunteer named Sue Riedel with the Dubuque Chamber of Commerce (working in conjunction with the Iowa Film Board), knocked on the door of a farmhouse near Dyersville.

“We’re thinking of making a movie in the area on a farm,” Riedel told the longtime Dyersville-area resident. “It possibly could be your farm. Would you allow us to take a video?”

Lansing, the third generation of his family to live on the farm, was dumbfounded. “What, are you dreaming, or what? The only people who come around here are insurance salesman.”

“No, we’re making a movie in the area and are scouting different locations,” Riedel insisted.

“What kind of movie?” Lansing asked.

“Well, it’s a movie about baseball.”

A chain of events the next few months would culminate in Lansing signing a contract for the use of his farm for the filming of “Shoeless Joe.” It took about 19 weeks to film the movie, whose title was later changed to “Field of Dreams.” Since then, the movie has gained world-renowned accolades and has made Dyersville a popular tourist destination for young and old alike.

It’s an unlikely story to capture the public’s imagination, at first glance. When Iowa farmer Ray (played by Kevin Costner) hears a mysterious voice one night in his cornfield saying “If you build it, he will come,” he feels the need to act. Despite taunts of lunacy, Ray builds a baseball diamond on his land. He is supported by his wife, Annie (played by Amy Madigan). Afterward, the ghosts of great players start emerging from the crops to play ball, led by “Shoeless” Joe Jackson. But, as Ray learns, this field of dreams is about much more than bringing former baseball greats out to play.

The film connects with anyone longing to be a part of something greater than themselves.

“This movie is about redemption, second chances, pursuing your dreams and giving back,” says Roman Weinberg, operations manager for Go The Distance Baseball LLC, which operates the Field of Dreams movie site.

The story resonated with people from the start. Lansing, who was employed at a John Deere facility in Dubuque when the movie was released, had a surprise visitor one day when he came home from work.

“Don saw a guy sitting on the bleachers at the farm,” said Weinberg, who noted that the man had driven all the way from New York to Iowa. “He told Don he had just seen the movie, and the field spoke to him. ‘I just had to come see it,’ he added.”

Soon other visitors started flocking to the farm. People started taking cornstalks, dirt from the infield and rocks as souvenirs of their visit. There was no merchandise for sale at the Field of Dreams back then, so that’s how the gift shop developed.

“This movie transcends culture and language barriers,” says Weinberg, who noted that guests hail from Japan, Australia, England and beyond.

It’s a wonderful thing for Iowa, added Weinberg, who grew up in Dubuque. “Iowa is sometimes overlooked and forgotten, but this movie embodies what’s great about Iowa, from the kindness of the people to our perseverance.”

So is this heaven? No, it’s Iowa, but what could be more inspiring — or enduring?

Olson’s harp music brings comfort to the dying, their families