-Messenger photo by Hans Madsen A public reception to bid Jane Burleson farewell is planned for 4 p.m. on Saturday at Cricket’s Lounge, 512 Central Ave., according to her niece, Stephanie Spicer, whose mother was Jane’s sister. Burleson, 88, was the first woman and first African-American to serve on the Fort Dodge City Council. No one has served longer than her 24-year tenure. 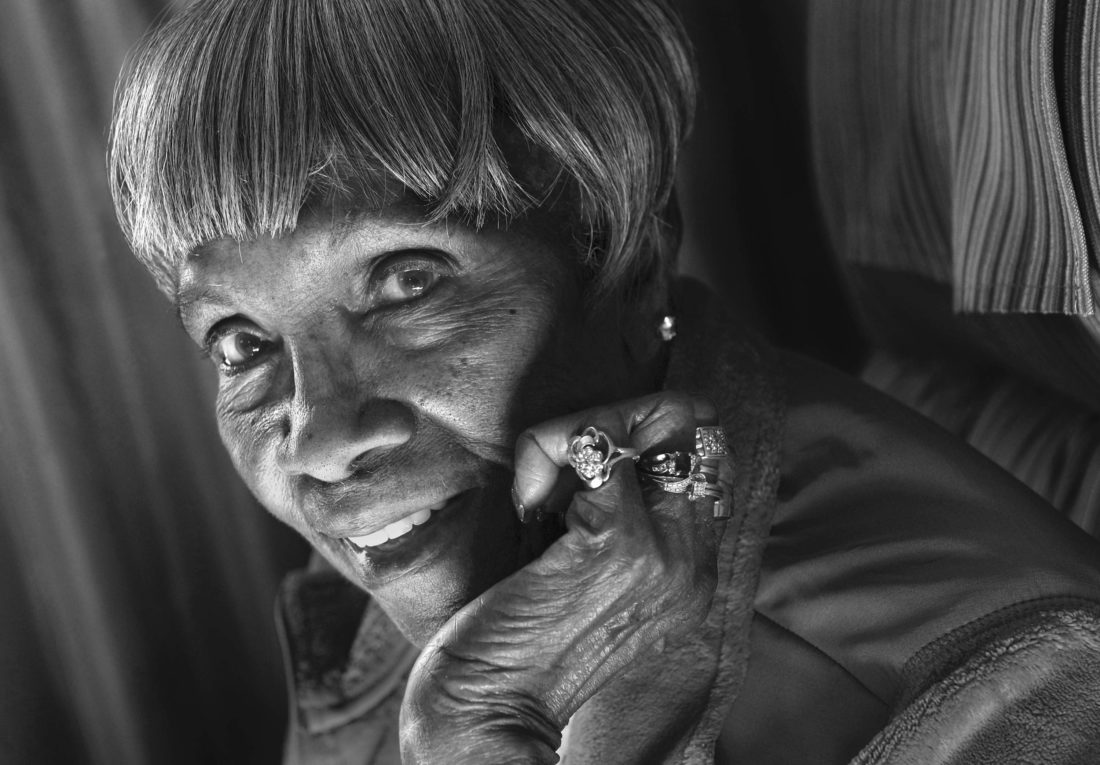 -Messenger photo by Hans Madsen A public reception to bid Jane Burleson farewell is planned for 4 p.m. on Saturday at Cricket’s Lounge, 512 Central Ave., according to her niece, Stephanie Spicer, whose mother was Jane’s sister. Burleson, 88, was the first woman and first African-American to serve on the Fort Dodge City Council. No one has served longer than her 24-year tenure.

Jane Burleson will soon say goodbye to the city she loves and has served so well.

But when she departs her native Fort Dodge for the warmer climate of Arizona, where she will live with relatives, it will be with the promise that she will one day return.

A public reception to bid Jane farewell is planned for 4 p.m. on Saturday at Cricket’s Lounge, 512 Central Ave., according to her niece, Stephanie Spicer, whose mother was Jane’s sister.

“It will be called the Diva Going Away Party. Everyone is to wear green,” Spicer said. “We call her a diva because of the great way she dresses and her independence.”

Union activist. Volunteer. Church leader. Lifelong Democrat. City Council member. Civil rights champion. And great cook, according to those who know her well — especially those who have enjoyed her sweet potato pie.

Jane Burleson — the first woman and the first African-American to serve on the Fort Dodge City Council — has worn all the titles well as one of the best-known, respected and beloved residents in Fort Dodge’s history. No one has served on the City Council longer than her 24-year tenure.

She is a lifelong Democrat who, at 88, worked a 12-hour shift on Election Day last Nov. 8 at Precinct 6 at the Elderbridge Agency, helping people register to vote. She also served as a caucus leader. Both are roles in which she has served for decades. A Hillary Clinton supporter, Burleson said she was “surprised” and “disappointed” when Clinton lost to Donald Trump.

The election made her even more adamant in her belief in getting to the polls and casting your vote: “You need to keep pushing, your vote does count. It’s like playing the lottery; you can’t win if you don’t play.”

President Trump is the 16th president of her lifetime. Over the years, she has met many of the candidates for president who have come to Fort Dodge during the Iowa caucuses — some who went on to hold the nation’s highest office.

Calvin Coolidge was in the White House when she was born in Fort Dodge to Otavia Bivens Jones Dukes and William Kelly Jones. She was born in 1928 — as she is quick to point out, the year before Martin Luther King. She grew up in what she still calls “The Flats” in southwest Fort Dodge, attending school at Pleasant Valley, Wahkonsa, Junior High and Senior High.

She left high school to marry at age 17 (later earning credits to get her diploma). After separating from her husband, Charles Turner, she moved to Chicago to work in a packing plant. They had a son, Charles, who survived combat in Vietnam but suffered a violent death in St. Louis in 1974. It was a heartache that remains to this day.

In 1948 Burleson returned to Fort Dodge to care for her ailing father. He died soon after, and she was hired that year by the Tobin Packing Plant, which Hormel purchased five years later. It was a good fit. In her 33 years at Tobin and Hormel, she worked in the sliced bacon department, sausage production line and eventually on the cut floor, and became involved in union activities, serving as secretary for the Local 31, United Packinghouse Workers of North America.

“In looking back about Jane, she always had a sense of identity and purpose in life and at work,” said Gary Ray, who joined Hormel in Fort Dodge in 1968, rose to corporate positions in Austin, Minnesota, and is now chair of the Hormel Foundation. “Her good nature and attitude at work would carry over to the other people on the line. Jane always had a lot of positive energy and excitement about her that you enjoyed being around her.”

She married Walter Burleson at First United Methodist Church in 1954. He had been in the restaurant business and also worked at the state liquor store, and was the first black person to serve on a jury in Webster County. He died in 2011.

Jane Burleson has been heavily involved in civil rights, locally and nationally, for more than five decades.

“Jane devoted a substantial part of her life seeking justice and fairness for all individuals of this great country of ours regardless of the color of that person’s skin or religious beliefs,” said Al Habhab, who met her in 1960 soon after he was first elected mayor of Fort Dodge.

“Jane came to my office to call to my attention specific instances of discrimination,” said Habhab, who served 14 years as mayor and later was a District Court judge and Iowa Court of Appeals justice. “Her presentation was excellent and meaningful and directly to the point. I looked into discrimination in housing and based on state and federal legislation, our City Council adopted anti-discrimination legislation that is still the law of this land. Jane’s perseverance hastened its adoption. But this is but a small part of her accomplishments.”

When the Hormel plant closed in 1981, she joined the Fort Dodge Community School District as a special education teacher’s aide. That was the year of her first foray into elective politics when she ran for a seat on the Fort Dodge City Council.

She lost her first attempt, but she ran again in 1983 and was elected. On the council, she recalled with a smile, “there were seven of us and six of them were men. They gave me hell but I gave them hell right back.”

Today, Fort Dodge is much more receptive to black residents than it was then, she said.

“We’ve come a long way. We are much more open today.” she said.

Burleson was a role model for young people in Fort Dodge especially blacks, recalled Charles Clayton, executive director of Athletics for Education and Success. “When I was growing up, she was one of the few we had who was an advocate for you — just as long as you do the right thing.”

Clayton recalled a time when he was “running my mouth” as a seventh- or eighth-grader while attending a football game at Dodger Stadium. “Here comes Jane, marching right up to me and reading me the riot act. She even knew my mom’s name and I straightened up right away. Jane was always somewhere around, always to give good advice.”

Sherry Washington, an organizer of Black History Month in Fort Dodge, shares the feeling: “Mama Jane is such a beautiful woman. She inspires me in so many ways. Her strength, knowledge and nurturing is superb. Her guidance and encouragement directed some of my political involvement — always encouraging and conversing on so many topics. I always love hearing her funny stories — there is never a dull moment. And I love her for loving me — dear Mama Jane, there will never be another.”

Washington said she was encouraged by Burleson to run for the Democratic Party’s 4th Congressional District Affirmative Action Chair and State Platform Delegate, both of which Washington is currently seated.

During her years of political involvement, Burleson has been active as a volunteer at the polls and during the caucuses and has attended numerous district and state Democratic conventions. She was selected to be an at-large delegate at the Democratic National Convention in New York City in 1980, but injuries from a car accident prevented her from going.

She recalls the many presidential candidates who have visited the city, including John F. Kennedy’s visit in 1960. She’s met Jimmy Carter, Jesse Jackson and Bill Clinton. After Clinton spoke in Fort Dodge, Burleson said, she moved forward toward the stage to get his autograph. A Secret Service agent intervened and said she could go no further. She recalled with a smile, “I told the agent, ‘I’m his maid, ask him to sign my card.’ And he did.”

Jimmy Carter came to Fort Dodge as president and had prescribed the 55 mph and other energy-saving programs to conserve energy. He encouraged Americans to turn down the heat and wear sweaters in their homes as he was doing so in the White House to set a good example. His mother, Lillian, accompanied him and Burleson got a chance to meet her, recalled Daryl Beall, former state senator. “Jane got a kick out of Miss Lillian, who was chilled at an event and wanted a sweater. ‘I don’t care what Jimmy says. Turn up the heat,’ Lillian Carter quipped to Jane.”

Judge Brown, who taught at Iowa Central Community College and Fort Dodge Senior High, has admired her greatly since he came to Fort Dodge in 1977. He said Burleson has played key roles locally in the Martin Luther King birthday celebration and Black History Month.

“She obviously enjoys being a public servant,” he said. “She loves politics. She wants people to be involved in politics. Don’t sit back, she’ll tell you, get out there and act.”

In 2013, Burleson was inducted into the Iowa African American Hall of Fame. She helped to launch Fort Dodge’s Martin Luther King Scholarship Committee, served as president of the Fort Dodge A. Philip Randolph Institute, and has been involved with the League of Women Voters and the Democratic Party. She has served her church, Coppin Chapel African Methodist Episcopal, for more than 50 years. She received the Cristine Wilson Medal for Equality and Justice in 2006. In 2002, she was named the Citizen of the Year in Fort Dodge.

She looks forward to her next adventure in Arizona, where she will relax in the sunshine and continue her passion of doing crossword puzzles. “I always want to be doing something — something helpful,” she said.

Said Beall, “Frankly, I cannot imagine our community without Jane. She has been such an integral part of Fort Dodge for years in her church, city government, schools, labor, Democratic politics.”

He thinks the perfect going-away gift for his friend would be a bottle of her favorite scotch, Glenlivet.

“Glenlivet is an expensive scotch whiskey. For discerning tastes. Jane is that way with people too. She meets people of all social, economic, ethnic and spiritual strata equally well. She is as at home at the country club as she is at the union hall. Jane is a beautiful human being.”