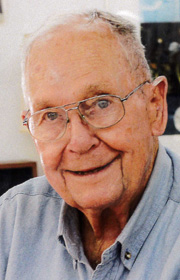 Richard is survived by his brother, Ronald (Marlene) Black of Ames and a sister, Merilyn Dee Tasler of Gowrie.

He was preceded in death by his parents, Robert and Henrietta (Parsons) Black and brother-in-law, Duane Tasler.

Richard was born July 18, 1932 in Farnhamville. He graduated from Rinard High School and then served in the United States Army. He then returned to school and graduated from Drake University in 1957 with his Bachelors Degree. Then he attended the University of Wisconsin and graduated in 1958 with a Masters Degree. Richard was a Professor of Art and Head of Printmaking at Drake University from 1960 to 1994. He had selected exhibits at the Royal Society of Painters-Printmakers Members Exhibition at Bankside Gallery in London, England in 2017. Richard had several art exhibits all over the United States including; the Des Moines Art Center, Indianapolis Art Museum, Milwaukee Art Center, Purdue University, Bradley University, Southern Illinois University, New Jersey State Museum, and the Blanden Memorial Art Museum. He was a member of Fellow, Royal Society of Painters-Printmakers, Mid-America Print Council, and the Southern Graphics Council.

Memorials may be left to family discretion.