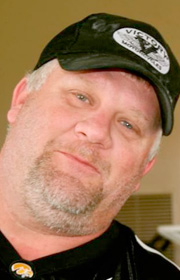 A graveside service will be 11:00 AM Saturday, July 11, 2020, at Saint Patrick’s Cemetery near Churdan with Rev. Lynn Bruch officiating. Laufersweiler-Sievers Funeral Home is serving the family.

James Patrick Brend was born November 29, 1967, to John and Jeri (Burke) Brend. Jim graduated from Paton-Churdan in 1987 where he loved to play football and was a member of the championship teams in 1985 and 1986. He then attended ICCC for trade school. Jim was united in marriage to LaChelle Myers and they shared 2 children, Nick and Jessica. The couple later divorced. Jim spent many years and countless miles in his 18-wheeler. He loved the open road. Jim was typically the comedian making everyone laugh. He was always the life of the party. Jim loved his grandchildren very much and enjoyed spending time with them. His friends and family made him the most happy.

He was preceded in death by his father, John Brend, infant brother John Brend Jr., his grandparents and nephew Jon Kane.