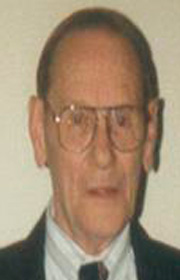 A lifetime resident of Fort Dodge, George graduated from FDSH in 1949 where he played on the basketball team, which won its way to the state tournament. He married Shirley Knack in 1950 and six children were born of this union. They later divorced. George played AAU basketball for several teams, played for years at the YMCA and was also on several local softball teams. He enjoyed coaching numerous youth basketball, baseball and football teams for many years.

George had several short-term jobs before he began a 13-year career with Oberg Dairy in 1953. In 1966, he and the late Eldon Hunt started G & E Dairy. They owned and operated the business until 1978 when George became sole owner. He continued the business until his retirement in 2001. George was the last home delivery milkman in the state of Iowa.

After retirement he enjoyed spending time with his family and friends. His favorite pastimes were meeting his friends for morning coffee, watching sports and Jeopardy on TV, and doing crossword puzzles or sudoku.

In light of the pandemic, no services will be held. The family requests that your favorite memories of George be submitted via the Laufersweiler-Sievers Funeral Home tribute page in lieu of visitation/services. Memorials will be left to the discretion of the family.