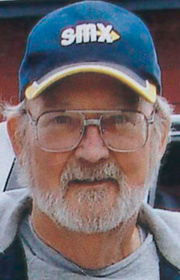 Private family services will be held at a later date. Laufersweiler-Sievers Funeral Home is serving the family.

He was preceded in death by his parents James and Vera Roberts and sister Roberta “Bz” Roberts.

James Kenneth “Kenny” Roberts, Jr. was born January 16, 1951 to James K. and Vera (Schaeffer) Roberts in Fort Dodge. He attended schools here. In 1976, he was united in marriage to Teresa “Terry” Bige. The couple later divorced. Kenny was a truck driver his entire career working at various places including Mead Containers, Smithway Trucking, and as an owner operator. In 2009, Kenny was reborn as the recipient of a double lung transplant. We were all inspired by his courage to overcome. He could usually be found working on a car or some project in his garage, drinking coffee and visiting with friends and family. Kenny will be greatly missed.