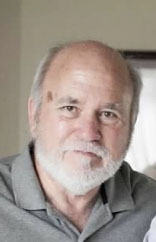 He was preceded in death by his parents, Robert and Dorothy (Wilkerson) Stuart, and his father-in-law Wilbert Caloud.

Jim was born on February 9, 1950, in Waterloo. He attended school in Traer and graduated from North Tama High School in 1968. He then attended the University of Northern Iowa and graduated with his bachelor’s degree in 1974. On June 4, 1972, he was united in marriage to Katherine Caloud. Jim continued his education at UNI and graduated with his Master’s degree in Educational Psychology in 1976. For several years, the couple made their home in Ames and later established their home in Fort Dodge. From 1976 to 2005, Jim was a Psychology Professor at Iowa Central Community College. He also taught many years as an adjunct professor at Buena Vista. Jim was a member of various educational associations. For a time, Jim served on the Fort Dodge Human Rights Commission. Jim enjoyed time with his family, animated conversations, fully taking advantage of “teachable moments,” fishing, visiting casinos, and collecting comic books, ice picks, and pocket knives.

In lieu of flowers, memorials may be left to the family for establishment of a scholarship in Jim’s name.