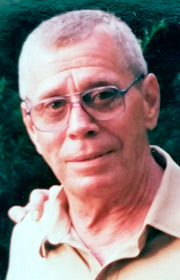 Harold Lessmeier, 87, of Fort Dodge, passed away on Val­en­tine’s Day, February 14, 2020 at the Paula J. Baber Hospice Home in Fort Dodge. A private graveside service for Harold will be held at North Lawn Cemetery at later date. Gunderson Funeral Home and Cremation Services are in charge of arrangements.

Harold Dean Lessmeier, the son of Paul and Thelma (Holm) Lessmeier, was born February 7, 1933 in Fort Dodge. He attended St. Paul’s Lutheran School and graduated from Fort Dodge Senior High in 1951. Harold enlisted in to the United States Army in 1958 and was stationed in Germany for 19 months. He received an honorable discharge in 1960.

On July 22, 1966, Harold was united in marriage to Alice Asche. After their marriage the couple made their home in Eagle Grove until 1977 when they moved to Fort Dodge. Harold worked for Geo. A. Hormel & Company for 33 years. He also worked as a security guard at the Cross Roads Mall, the gypsum mills in Fort Dodge and at the ICCC.

Harold was a diehard Detroit Lions and New York Yankees fan. He loved having coffee with his friends and family get togethers. He also enjoyed golfing and playing cards.

He is survived by his wife, Alice Jean; his children, Terry Lessmeier of Mount Vernon, IA and Christine Lessmeier of Kansas City, MO; step-children, Carolyn Sporaa of Kanawha, Bud Jacobson (Stephanie Dobbs) of Clear Lake, Kathy Jacobson Fender of Clarion and Kim Jacobson Hill of Goldfield; and many grandchildren and great grandchildren and a host of friends. Harold is preceded in death by his parents, a son Russell, his brother Paul Lessmeier Jr. and an infant sister.