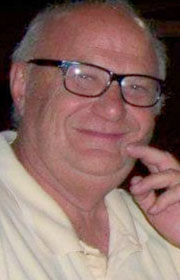 HUMBOLDT — Richard Hake, age 83, of Ankeny passed away Jan­uary 5, 2020 at Tay­lor Hospice House in Des Moines. Richard’s wishes were to be cremated and visitation will be held from 3 until 4:30 p.m. on January 16 at West End Salvage, 22 9th Street, Des Moines with A Celebration of Life service will begin at 4:30 p.m.

Richard Dean Hake was born in Radcliffe, Iowa on July 31, 1936 the son of Walter and Ollilia (Wang) Hake. Dick graduated from Radcliffe High School in 1954. He enrolled in the Brown Institute in Minneapolis shortly after high school where he majored in Radio Broadcasting.

After college, Dick returned back to Iowa where he was employed by KWMT in Fort Dodge, IA as a disc jockey. On the weekends Dick could be found DJ-ing Teen Hops around the Midwest. Dick would often talk about these adventures and of the people he met along the way. Later in life you could often times catch him counting down the TOP 40 or giving a weather report in his best “radio voice” for old time sake.

Dick also served the town of Humboldt, IA as the City Clerk from 1971-1991 along with being the Manager of Circulation at the Reminder Newspaper from 1992-1996. In 1997 Dick, Rosemary and Michael moved to Hastings, MN where he worked at Smead Manufacturing. This Mississippi River town was perfect for a man that loved to sit along its shores and watch the tug boats navigate the lock and dam.

Between family gatherings and attending his grandchildren’s sporting events, Dick loved going to Threshing Shows, Motorcycle Swap Meets, Doodlebug Conventions, Vintage Volkswagen Car Meetings, and any other place in which he could find folks of like mind and interest. Although he was a member of many different groups, Dick never blended into the crowd. His friends and family will remember him as a man with a huge heart, always open arms, and one heck of a storyteller.

In lieu of flowers, memorials may be directed to the family or charity of choice In Memory of Dick Hake.

Online condolences may be left at www.adamssoderstrum.com

Adams Funeral Home in Ames is assisting the family with arrangements.