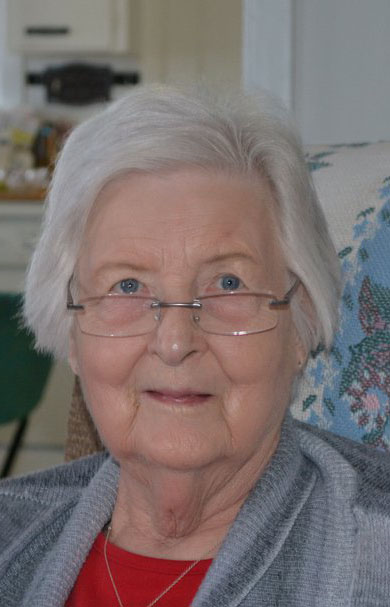 Evelyn Blom was born on February 7, 1928, on a farm north of Kilduff, Iowa. She was the oldest of six children born to parents Tunis and Jennie (Roelofsen) Blom. When Evelyn was five years old, the family moved to her Grandfather Roelofsen’s farm near Sully, Iowa. Evelyn attended schools in Sully, graduating from Sully High School in 1946.

Evelyn was united in marriage to Paul E. Farnham on October 1, 1950, in Des Moines, Iowa. Evelyn worked as a private practice nurse in a Des Moines clinic until 1952 when Paul and she moved to Ames. She worked as an operating room nurse and was the head nurse in the nursery at Mary Greeley Hospital in Ames and also attended classes at Iowa State College.

In the summer of 1954 she moved to Gowrie with Paul. The following spring, they moved onto the farm north of Gowrie where they made their home for 62 years. Evelyn assumed the role of farm wife, helping Paul on the farm, tending to household duties, and raising four children – Dean, Judy, Dale, and Doug. In 1970, Evelyn returned to work as a private practice nurse for Dr. Sarah Sutton of Fort Dodge and also worked for Friendship Haven Health Services in Fort Dodge. She retired from nursing in 1991.

Evelyn was passionately involved with many facets of the United Methodist Church for over five decades. She taught Sunday school and Bible school, was Sunday School Superintendent, a member of the United Methodist Women, a District-level officer, a Conference-level officer, and a certified Lay Speaker. She wrote many programs for different church events and frequently filled the pulpit for vacationing or absentee pastors across central Iowa.

Of Evelyn’s many accomplishments throughout her lifetime, she felt her greatest accomplishment was learning to fly. She received her private pilot’s license in 1979, at age 51 and joined husband Paul in the cockpit on many trips around Iowa and beyond. The same year, she also learned to swim, another accomplishment of which she was very proud. Evelyn was a longtime member of the Ninety-Nines, Inc., an international organization of women pilots, as well as the Aircraft Owners and Pilots Association (AOPA).

Evelyn’s generous nature was frequently demonstrated through her willingness to open the Farnham family home to friends and family alike, providing a meal or a bed to those in need whether it be for a night, a week, or longer. Evelyn also volunteered as a reader for IRIS (Iowa Radio Reading Information Service for the Blind and Print Handicapped) for 20 years, reading the Fort Dodge Messenger over a radio broadcast for the vision-impaired.

Evelyn was a loving wife, mother, grandmother, and great-grandmother. She did much to serve the community in which she lived and far beyond. She will be missed. Memorial gifts will be left to the discretion of the family.