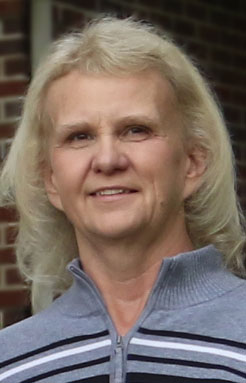 Funeral services will be held on Tuesday, December 3, 2019, at 10:30 a.m. in the chapel at Laufersweiler-Sievers Funeral Home in Fort Dodge. There will be a family burial at St. James Cemetery in Clare at a later date. Visitation will take place on Monday, December 2, 2019, at Laufersweiler-Sievers Funeral Home from 4:00 p.m. to 7:00 p.m. In lieu of flowers, the family requests that memorials be directed to the Alzheimer’s Association.

Pamela (Pam) Passow, the daughter of Donald and Corrine Passow of Clare, Iowa, was born on March 23, 1958, in Fort Dodge. She attended Northwest Webster Community Schools graduating in 1976. She attended Iowa Central College and subsequently worked for a brief time in the office at Iowa Beef Packing (IBP) in Fort Dodge. She went on to work in the Webster County Attorney’s office for 34 years, serving as Office Manager until the time of her retirement on August 2, 2011.

Pam had one daughter in 1984, Lindsey Purcell, with Randy Purcell of Goldfield. Pam met Randy in 1983 and had a long relationship with him. Most recently, Pam lived in Fort Dodge with her significant other of nearly 18 years, Jim Reed. They lived on an acreage west of town where Pam enjoyed working in the yard, feeding the birds and caring for their cats Buddy, Beaner, Brownie and Toner. Pam loved animals, attending concerts, dining out and traveling. She will be remembered by those who knew her as a kind, gentle, loving person who considered everyone she met a friend.

Pam was preceded in death by her parents, Donald Passow and Corrine Passow of Clare, Iowa.