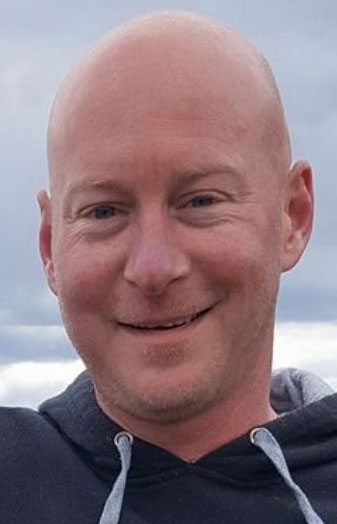 Jeremy Paul Smith, age 43, of Fort Dodge, passed away peacefully on Tuesday, November 26, 2019, at Paula J. Baber Hospice Home, with his loving mother and family members by his side.

Jeremy was born on October 22, 1976, at Trinity Regional Hospital in Fort Dodge to Gary Paul Smith and Bonnie (Nedved) Rhodes. He was baptized at Fulton Lutheran Church in Roelyn, Iowa. Jeremy attended K-12th grade at Fort Dodge Community Schools, graduating in 1995. He then attended Northwest Missouri State in Maryville, Missouri, from 1995 to 1997. In both high school and college, Jeremy was active on competitive cheerleading teams. Jeremy was united in marriage to Rochelle Henke in 2003 in Kansas City, MO; they later separated. He moved back to Fort Dodge in 2005 where he was employed by Fort Dodge Community Schools from 2005 to 2018.

Jeremy was friends of Bill and Bob, he enjoyed fishing and remote control quarter scale cars and airplanes. His pride and joy was his 2010 Shelby Mustang GT500. He spent many weekends camping and sitting around the bonfire with friends grilling; he even tried camping one winter in Ft. Dodge but his spaghetti and eggs froze to his plate. Growing up, Jeremy was in the Cub and Boy Scouts, where he achieved the second highest rank of a Life Scout. Many memorable scout trips included camping in Ely, Minnesota, where they took a 50 mile canoe trek into Canada and to Cimarron, New Mexico, where he climbed the Tooth of Time.

Jeremy was always the first to lend a hand to anyone who needed help; he will be missed by many, including his mother; Bonnie (step-father Dave Rhodes) of Ft. Dodge, step-brother Michael (Mary) Smith of Des Moines; aunts and uncles, Lynn (Dave) Merrifield of Colorado Springs, CO, John (Martie) Nedved of Pocahontas, IA, Coleen (Roger) Jones of Omaha, NE, and Sharri (Darwyn) Hansen of Schaller, IA; numerous cousins and many friends.