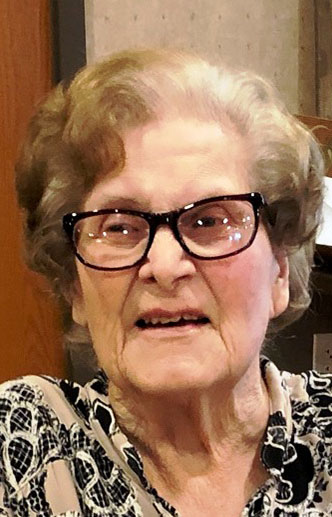 A service honoring Gloria’s life will be 10:30 a.m. Friday, November 22, at Rolling Hills Community Church with the Rev. David Barton officiating. Interment will follow in North Lawn Cemetery. Visitation is 4:00 to 7:00 p.m. Thursday at Gunderson Funeral Home & Cremation Services. Memorials may be directed to the discretion of the family.

Gloria Magdalene Weiss, the daughter of Louis and Lydia (Will) Weiss, was born April 23, 1931, in rural Fort Dodge. She attended Fort Dodge Senior High School. While on a detassling crew, she met her husband-to-be Irving Larson, who was the crew driver. They were united in marriage on February 25, 1950, in Fort Dodge. Gloria worked for a manufacturing company in Webster City and was employed as a health care worker at Ellen’s and also at Friendship Haven. She also spent time walking beans with her crew of family and friends and spent many hours in her garden. She enjoyed canning, making crafts and embroidery, collecting angels and dolls. She was a life long member of Hauge Lutheran Church until its closing. Gloria enjoyed garage sales and attending family reunions. She loved her kids and grandkids and will be lovingly remembered for her scalloped potatoes, fried chicken, pecan pie and German chocolate cake.