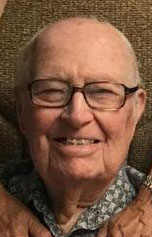 Bill was born June 18, 1923, in Fort Dodge, Iowa, and was the son of the late Thomas Vernon and Evelyn Cordelia (Crouse) Buxton. He was predeceased in death by his wife, Marlene A, Buxton, his brother, John Vernon Buxton, who was killed in WW II over the skies of Germany in 1944; a daughter, Billie Beth (Buxton) Kramer; and a grandson, Russell Eric Crump.

Arrangements were made by Moody Funeral Services, Stuart, Virginia. Online condolences may be sent by visiting www.moodyfuneral services.com. In lieu of flowers, donations may be made to the Parkinson’s Foundation.