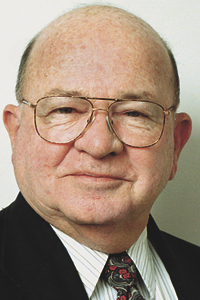 Dan Lee Payne, 82, of Fort Dodge, a former Fort Dodge city councilman who was the executive director emeritus of the city’s Convention and Visitors Bureau, died Monday, February 13, 2017 at Trinity Regional Medical Center in Fort Dodge. Funeral services will be 11:00 AM Monday, February 20, 2017 at the First Covenant Church in Fort Dodge with Pastor Allan Redenius officiating. Burial will be in Memorial Park Cemetery with full military honors conducted by the VFW Post #1856 and the United States Marines. A time of gathering for family and friends will be from 2:00 PM to 5:00 PM Sunday at the Gunderson Funeral Home and Cremation Services in Fort Dodge.

Dan Lee Payne, the son of Jack and Gertrude (Johnson) Payne was born February 6, 1935 in Fort Dodge, Iowa and graduated from Fort Dodge Senior High School. Five days after his 18th birthday on February 11, 1953, Dan enlisted into the United States Marine Corp and severed in the aviation unit during the Korean War. Dan was honorable discharged as a Corporal from the Marine Corp. on August 26, 1955. Six months later on February 9, 1956, Dan married Kay McCullough in Fort Dodge. He earned a bachelor’s degree from George Williams College in Chicago, Illinois, and did graduate studies at the University of Nebraska in Lincoln, Nebraska. He began his professional career by running YMCA camps in Illinois and Michigan. In 1971, he became parks and recreation director in Fort Dodge and held that post until 1986. While he was the director, the former Expo and Oleson Park pools were built and the Lakeside and former Sunkissed Meadows golf courses opened. Dan left the administrative assistant post in 1986 to become the city manager in Spencer. He held that position for 10 years. Before joining the Convention and Visitors Bureau in 1999, he did fundraising for the Clay County Fair and the Maritime Museum in Arnolds Park. In a special election in February of 2003 Dan was elected to the council of Fort Dodge. He was on the city council from 2003 to 2009. Dan represented Ward 4, which is the north central part of the city. Dan enjoyed fishing and hunting but his greatest joy in his life was being with his wife Kay and his children and grandchildren. Kay passed away last year from cancer on May 17, 2016. Dan was a member of the First Covenant Church in Fort Dodge.

Dan was a beloved father, grandfather, great grandfather, brother, friend, and husband and will be forever missed. He is survived by his two children, Kelly (Anne) Payne and Laura Rees of both of Fort Dodge; nine grandchildren and ten great grandchildren and by a very spoiled dog Sammy. Dan is preceded in death by his parents, three sons Harry, Little Dan, and Kevin and his sisters, Lois Ainslie, Betty Askelsen and Patricia Blunt.

In lieu of memorials, the family asks that you donate to Almost Home Animal Shelter or your own church.