New to the collar, new to Fort Dodge 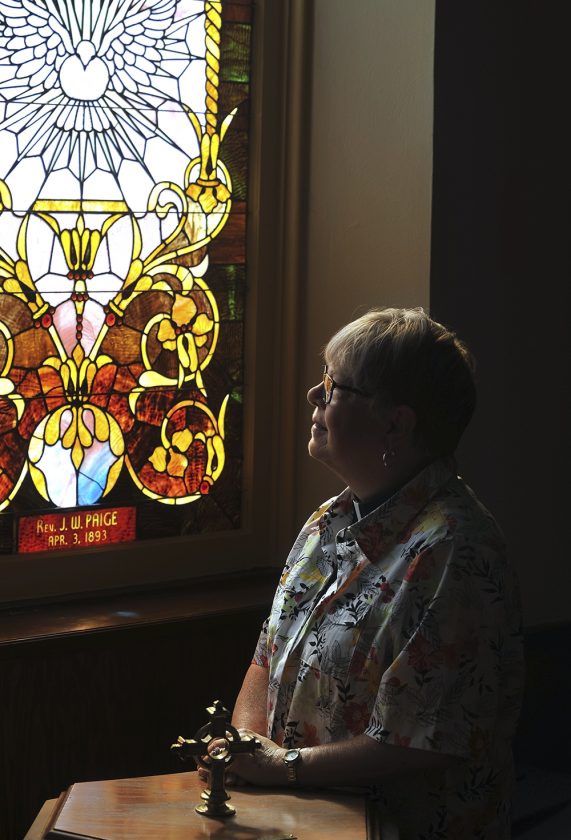 The Rev. Kristine Leaman, the new priest at St. Mark’s Episcopal Church in Fort Dodge, came to her calling later in life after serving in a completely different capacity.

“I was a psychiatric nurse,” Leaman said. “Which I was for a million years, give or take.”

Towards the end of that “million or so” she felt called.

She asked for advice from a friend.

“I said, I think I’m being called. She said I think so, too.” she recalled.

The process to become a priest in the Episcopal Church involves a series of interviews, writing a spiritual autobiography, meetings with church officials and then once recommended as a postulate, another interview with the bishop, counseling and a psychiatric examination.

“At the end of all that I became a postulate for Holy Orders and was allowed to attend seminary,” she said.

During her studies, there were several personal crises, including a death in the family.

“It was not a smooth path,” she said.

The Mason City native then went on to do supply work, which is essentially serving as a temporary or interim priest.

Much of her early work was in Claremont.

“They were without and wanted a priest,” she said. “They called me and I served till June of 2018.”

The small congregation of about 12 could no longer keep her on when a sustaining member went into a care facility.

“It was back to supply work,” she said.

Serving in Fort Dodge was not her first choice. She said she was called to come here during prayer time in her car while driving between here and Mason City. She was doing prayer work, asking for a just election leading up to the 2018 runoff.

“I started praying, show me what my ministry is,” she said.

“If you don’t want the Holy Spirit being around in your life… don’t ask,” she said.

She came to Fort Dodge for what she thought would be a discussion. It turned out to be a job interview.

They liked what they heard and offered her a position as a curate or associate priest under Bishop Michael Last. She began in December 2018.

Leaman had a lot of attachments still to Mason City: a family business, family. It was home.

Fort Dodge was growing on her.

“I was starting to fall in love with the parishioners and this church,” she said. “Do I turn away from the call of the Holy Spirit and God? They offered a letter of call in mid to late June. I’m embracing that as an opportunity for growth.”

Leaman believes that her church should be member-centered rather than priest-centered.

“We are all called to be Christ’s hands,” she said.

“I did my first wedding last Saturday,” she said. “It was a same-sex marriage. The place was packed to the rafters, it was a wonderful day, a really joyous day. It was bittersweet, too. The prejudice still remains, there’s still dissension. People just want to love who they love.”

She’s enjoying the process of meeting new people, and is looking forward to getting involved in the greater community.

“The life of a priest is a busy one,” she said.

In the recent past, she’s had little time for hobbies.

“I’m very much looking forward to rediscovering what I like to do,” she said.

One thing she will be doing soon is bringing her dog, Bernie, to work.

“He’s not named after Bernie Sanders,” she said. “It’s going to be bring my dog to work everyday.”