-Messenger photo by Elijah Decious
The Rev. Brian Feller, the newest member of Holy Trinity Parish, is excited to spread the love of Christ in Fort Dodge. 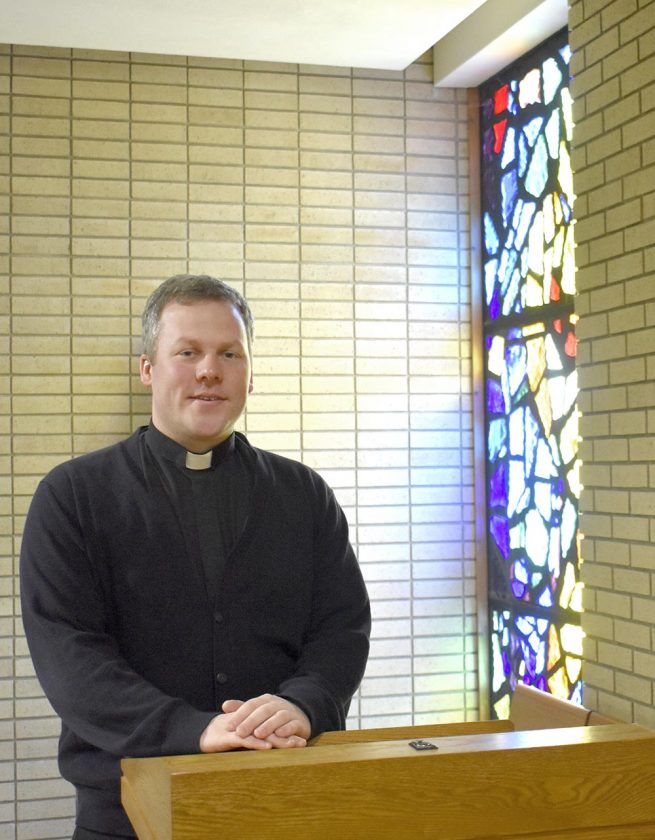 -Messenger photo by Elijah Decious
The Rev. Brian Feller, the newest member of Holy Trinity Parish, is excited to spread the love of Christ in Fort Dodge.

The Rev. Brian Feller, the new priest at Holy Trinity Parish in Fort Dodge, thought about being a priest from a young age. But after his roundabout journey to priesthood, he doesn’t pretend to know the future.

That includes why God brought him to Webster County, where the bishop assigned him to be a chaplain for St. Edmond Catholic Schools.

“In terms of the fruitfulness of why I’m here, that’s up to (God),” Feller said. “It was the bishop that brought me here, and I said ‘yes.'”

“So hopefully I don’t mess up,” he chuckled.

But he did have a few inklings along the way.

“When I was ordained a priest, I knew it was for this part of Iowa,” said the Sibley native, ordained in 2015.

After ordination, he spent some time in Sioux City and then Carroll County, working at various parishes and Kuemper Catholic school.

Perhaps it’s appropriate that a child who questioned his calling of what to be when he grew up ended up in positions of helping kids be themselves in Catholic schools.

“I desire for kids to have a sense of freedom, to do the good they decide to do, even if the others aren’t in favor of it or are pressing them to go another way,” he said. “To still feel a peace or joy, not always calculating what others will think.”

The weight of childhood for some is getting heavier and more challenging, he says, as families are torn apart by schedules, business and work to put food on the table, ironically spending less time around that table together.

“That’s a challenge,” he said.

The journey he pursued, going from Iowa State University in Ames studying electrical engineering to St. John Vianney Seminary in St. Paul, Minnesota, to teaching and ministering in Storm Lake and South Dakota, all helped him come to answer one question.

In Fort Dodge, the 34-year-old is looking to see the will of God unfold with each new day.

“Each day his will is a blessing,” he said. “I imagine he’s called me here to help me share in his love and to share it with others.”

He keeps an eye out for ice cream shops along the way, too.

“I really like that there’s so many places to get ice cream here,” he said. “I really enjoy that.”

He also enjoys being around people, one of the greatest joys he says he experiences as a priest.

“As a priest, you serve people, you’re around people. So that’s a real big joy, to see people,” Feller said. “People are fundamentally good.”

And perhaps that’s why it’s easier for him to share the love of Christ with others, knowing that Jesus didn’t die for nothing.