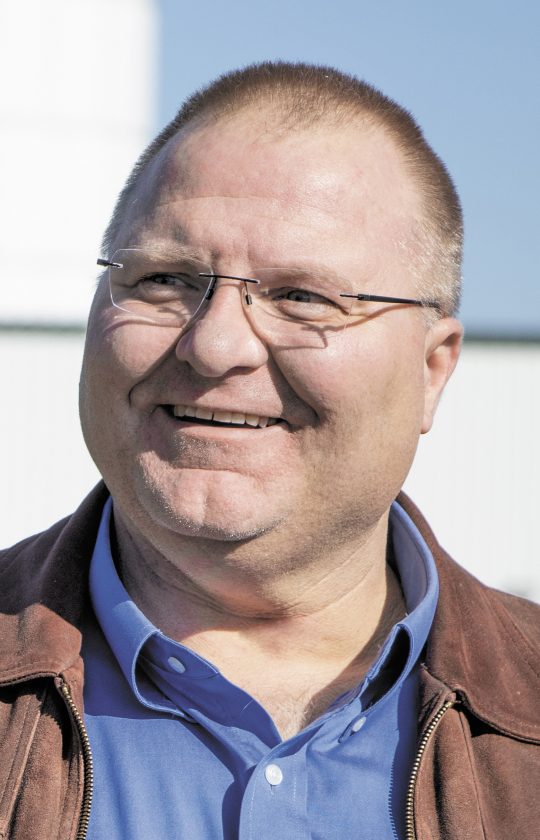 Editors note: In the latest in a series of articles introducing candidates on the June 2 primary election ballots, Bret Richards, a candidate for the Republican nomination in the Fourth Congressional District, answers some questions from The Messenger.

The Fourth Congressional District includes Webster County and all of its surrounding counties.

None. I think Iowans are tired of career politicians running for office only to reach for the next rung on the political ladder. Washington already has enough politicians, Iowans are looking for someone they can trust, like their neighbor, to get the job done in Congress.

I’ve been in business since I came back from overseas after my time as a soldier in the Army. In the family business, we sold fuel to farmers, operated restaurants and convenience stores, and employed over 300 Iowans in rural communities across western Iowa. Currently, I teach business students leadership at Creighton University and serve as the board chair of the Manning Regional Healthcare Center.

When voters head to the polls on June 2 or mail in their absentee ballot, I’d ask that they consider my service in the Army, my experience as board chair of a regional health care center, and my role in a family business that employed more than 300 Iowans. As a soldier overseas, my job was to lead others to a common objective. At the hospital, I spend every day ensuring that medical necessities are available and accessible in rural Iowa. And, in my family business, it was about creating opportunities, working together, and listening to the public.

Too many insiders in DC and Des Moines have forgotten what public service is about. Our Founding Fathers never wanted politics to be a career. They wanted citizen legislators to serve for a short time, use their everyday experience, and always put the country and its people first. We get more done as neighbors in our small towns in 20 minutes than politicians in DC or Des Moines have in 20 years. Let’s send Washington an Iowa neighbor for a change.

In your opinion, what is the No. 1 issue facing the nation and what would you seek to do about it if elected?

Currently, the state of the economy is front of mind for many Americans. However, what’s not being discussed as much, is the toll on mental health that this quarantine has created. Even before the shutdown, our government and society failed to consider the most common mental health issues as important aspects of health care. Many of our society’s worst problems, from drug use to shootings to broken homes, can be traced back to a lack of mental health attention. If you have a broken knee, you get to go see a doctor and get it fixed. If you have a broken spirit, the fix is not so guaranteed.

At the federal level, I’d push for more investment into mental health research and care, not only for our veterans who have suffered greatly, but for the rest of the population as well. As a health care official, I’ve seen how dangerous cracks in mental health coverage have formed in our medical system and I will work to address them.

What would you recoomend to rejuvenate the economy?

Our economy is built on consumer confidence and small businesses. If your average Iowan is too afraid to go to the local store, there’ll never be a natural economic recovery. As a business owner, I’ve watched for decades how the government spends more than it takes in and doesn’t do enough to save for a rainy day. And right now, we’re going through a monsoon.

Government can’t spend its way out of this disaster. We can’t create industries (airline, cruise line, etc.) that believe they’re ‘too big to fail’ and will always be bailed out. That’s not how a healthy free market works. What this period has shown is actually the worst consequences of government regulation with only the largest corporations keeping the doors open. The stimulus only continued this consolidation in every area of the economy.

Since government created this disaster, I hold government accountable. Stimulus checks are needed for the average taxpayer in our country. However, no bailouts. No sweet deals. No kickbacks for special interests. If politicians use the taxpayer’s money for anything other than helping the taxpayer during this crisis, it’s no better than looting during a natural disaster.

As a small business owner, I’ve seen jobs and opportunity slip away from many of our small towns across the district. When Jill and I came back to Irwin after the Army, it was because we wanted to start a family in the same small town with the same values we were raised with–but we also were looking to help grow my parents’ family business. And one of the most consistent roadblocks to our business growth was the cost of compliance brought on by government overregulation.

In America, and especially in rural Iowa, small business is the backbone of our local economy. But our small businesses can’t compete if government creates a ton of laws that only large corporations can abide by. I cannot imagine the amount of businesses government closes down every day.

Rural jobs struggle to come back because the government built the system that way. In Congress, I will work with President Trump to deregulate the economy and allow the small business owners and job creators in our local communities to have a federal partner that is encouraging hiring and growth rather than squashing our economic engine.

More red tape has been cut within the medical field in the last two months than I can remember. From telehealth to the 96 hour-rule and over 1,000 areas within the medical field, the FDA and CMS have been rolling back the regulatory burden heaped on providers and physicians for decades. Many, if not most, of this deregulation should remain in place without needing to request special waivers.