-Messenger photo by Elijah Decious
Webster County Sheriff’s Deputy Jenny Randleman holds a radar gun in her patrol vehicle. Law enforcement agencies are prepared for an uptick in traffic this Memorial Day weekend, despite unpredictable traffic patterns this year due to the advent of COVID-19. 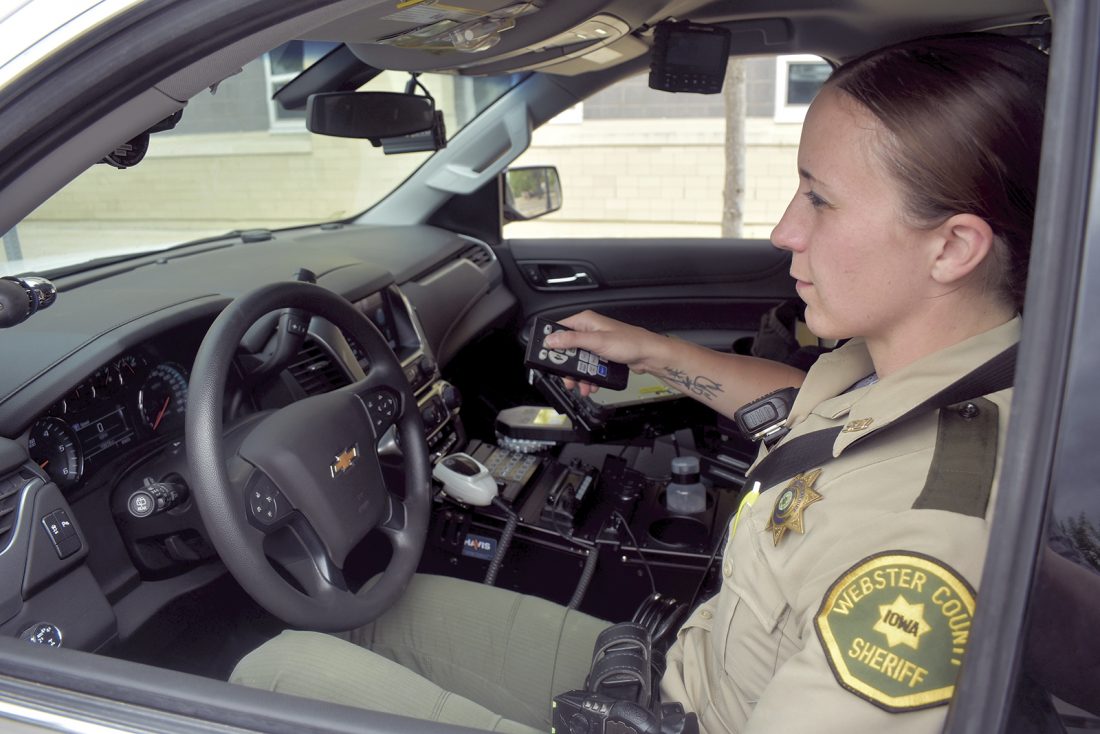 -Messenger photo by Elijah Decious
Webster County Sheriff’s Deputy Jenny Randleman holds a radar gun in her patrol vehicle. Law enforcement agencies are prepared for an uptick in traffic this Memorial Day weekend, despite unpredictable traffic patterns this year due to the advent of COVID-19.

Though traffic levels this weekend will be less predictable than past Memorial Day weekends, law enforcement officers are still preparing to watch the roads carefully.

“This year being different, we’re seeing some patterns where traffic is starting to slowly pick up,” said Sgt. Aaron Smidt with the Iowa State Patrol. “Overall, traffic has been down quite a bit, but we’re seeing things pick up a little bit.”

Recently relaxed regulations with COVID-19 closures mean that some may choose to try to get out and enjoy the places they can with the three-day weekend. With campgrounds and some restaurants opening up in time for warmer weather, the first unofficial road trip weekend of the summer could see more pronounced traffic than usual.

“Once they start relaxing some of these regulations, we’ll see a lot more summer travel with folks being on vacations,” Smidt said, unable to truly predict the reliable patterns of past years. “It depends on what really happens (with regulation.)”

But for law enforcement, holiday weekends usually mean an uptick in moving violations like speeding or using cell phones. Law enforcement officers ask drivers to practice the same common-sense precautions they usually would: don’t use your phone while driving, obey the speed limit, wear your seatbelt and don’t get in a hurry to get somewhere.

The ISP has seen a dramatic increase in excessive speeding this year. In March, the ISP saw a 35% increase in speeding tickets issued for going at least 25 mph over the speed limit, compared to the four-year average, and a 40% increase in citations to drivers going over 100 mph.

“People in a hurry to get to their destination take unnecessary risks,” Smidt said.

Emptier highways during the pandemic may have had an affect on increased speeding. Even though there may be less traffic than usual, the ISP plans to have a few more troopers on the road this year.

Though he anticipates less Memorial Day traffic than other years, Webster County Sheriff Jim Stubbs said there will be a marked increase from levels so far in 2020. He said traffic levels have already increased from just a few weeks ago, though traffic deaths are down compared to previous years.

“People don’t travel quite as much, but are out as things open up,” he said. “Campgrounds are starting to open up, but people haven’t had the opportunity (yet) to go out camping and do those kinds of fun family things.”

He suggests travelers stay aware of what is still closed, especially if traveling out of state, and allow plenty of time to get to their destination.

“As people start to get out, they’re going to be in a little more of a hurry or pay less attention than normal because they’re just excited to go,” Stubbs said.

“Anymore in this day and age, you have to wait and see what transpires because there is no normal anymore,” he said.