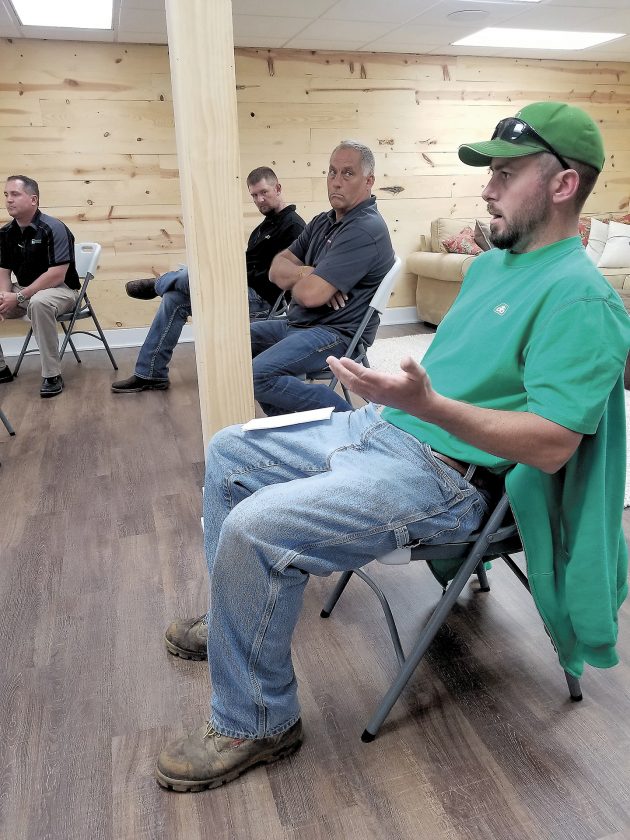 ROCKWELL CITY — While some people fought over toilet paper when the government ordered lockdowns due to COVID-19, the pandemic also highlighted another essential.

“People are more interested in where their food comes from,” said U.S. Sen. Charles Grassley, a Republican who hosted a town hall meeting in Rockwell City on Wednesday at the Calhoun County Farm Bureau office. “If you want to know the importance of agriculture, remember that society is only nine meals away from a revolution.”

Grassley wanted to hear from Iowa farmers about how the COVID-19 pandemic has affected their businesses. One of the farmers’ first questions to Grassley focused on concentration in the meat-packing industry.

“When I needed to sell cattle recently, Greater Omaha Packing Co. was the only place that would take them, and they low-balled me,” said Ben Albright, who farms near Lytton with his family. “Their bid probably cost me $20,000 on those two loads of cattle.”

Grassley agreed that the high rate of concentration in the meat-packing industry isn’t working for livestock producers. 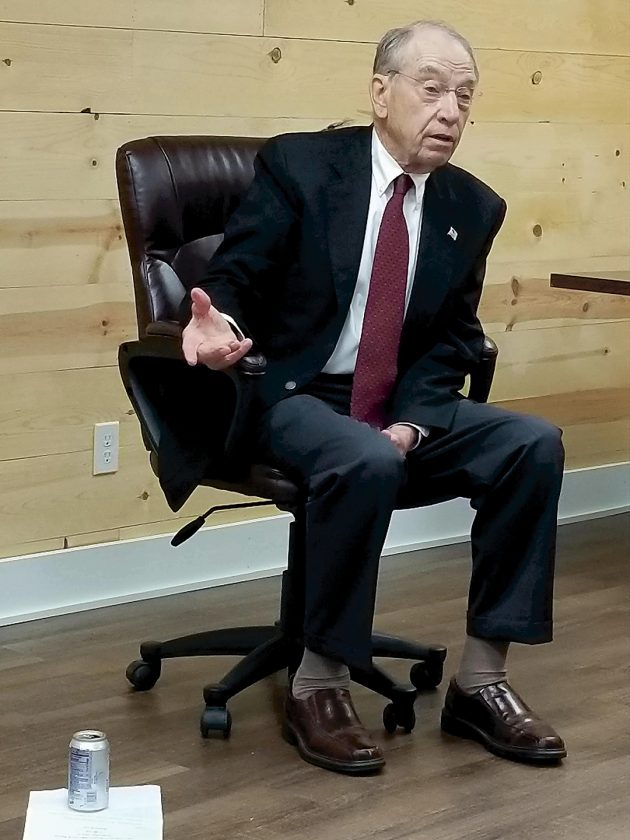 “Packers are putting the squeeze on livestock producers,” he said. “In the 1990s, I started working on the lack of price discovery in the industry, and we’re still fighting for this. I always say transparency brings accountability.”

In early April, Grassley called on the U.S. Department of Justice and U.S. Department of Agriculture to investigate potential market and price manipulation, collusion, restrictions on competition and other unfair and deceptive practices under the U.S. antitrust laws and the Packers and Stockyards Act.

“Holding the four large meatpacking companies accountable is the least we can ask of federal officials,” Grassley said. “I’m glad to see this issue is getting get more attention.”

Other farmers asked Grassley about recent trade deals that will create new opportunities for U.S. ag exports, including the United States-Mexico-Canada Agreement and the Phase 1 deal with China.

“China has been making a good-faith effort to follow the trade deal, at least on ag purchases,” Grassley said.

While Grassley acknowledged that many Americans are upset about China’s connections to the COVID-19 virus, will the U.S. use this against China on ag trade deals?

No, according to U.S. Trade Representative Robert Lighthizer, said Grassley, who spoke with Lighthizer recently.

“China needs us worse than we need them” on many products, Grassley said. “But we are too dependent on China for our medicine.”

Farmers also asked questions about the Coronavirus Aid, Relief, and Economic Security (CARES) Act and other financial assistance designed to speed relief across the American economy. Congress has authorized roughly $3 trillion in various programs for coronavirus relief over the last two months.

The aid packages haven’t been a cure-all, though.

“I truck livestock in the summer,” said Brad Black, a past president of the Calhoun County Farm Bureau. “With all the depopulation of livestock operations, will I have a job to go back to? Is there any help for these types of outlying industries?”

Grassley framed his answer with a scenario that occurred after the Sept. 11, 2001, terrorist attacks. When airplanes were ordered to quit flying, companies like Enterprise Rent-A-Car came to Grassley’s office seeking financial assistance, since they were hurt by the lack of travelers.

“We didn’t help them,” Grassley said. “I don’t know how far down you go. That’s probably not the answer you wanted, though.”

Grassley also indicated there may be a CARES Act 2 at some point.

“Let’s see what the first $3 trillion does, however, before we do more,” he said.

All the farmers at the town hall meeting expressed concerns that the federal government is accumulating a lot of debt with programs like the CARES Act.

“We’d just as soon have good markets and a strong economy than payments,” Albright said.

Ensuring that Americans have the freedom to utilize their talents, work and contribute to their local communities helps America thrive, Grassley said.

“In the past 240 years, this country has been through a lot of things worse than this,” he said. “If we can maintain a system of limited government where people can pursue their own ambitions and goals, I don’t have any doubt we’ll come out of this OK. I have great hope for America.”