He ‘served God, country and Corps’

-Messenger photo by Bill Shea
Palmer Haraldson, a U.S. Marine who was killed in the World War II battle for Tarawa, an atoll in the Pacific Ocean, is buried in Memorial Park Cemetery in Fort Dodge. His body was returned to Fort Dodge in 2016. 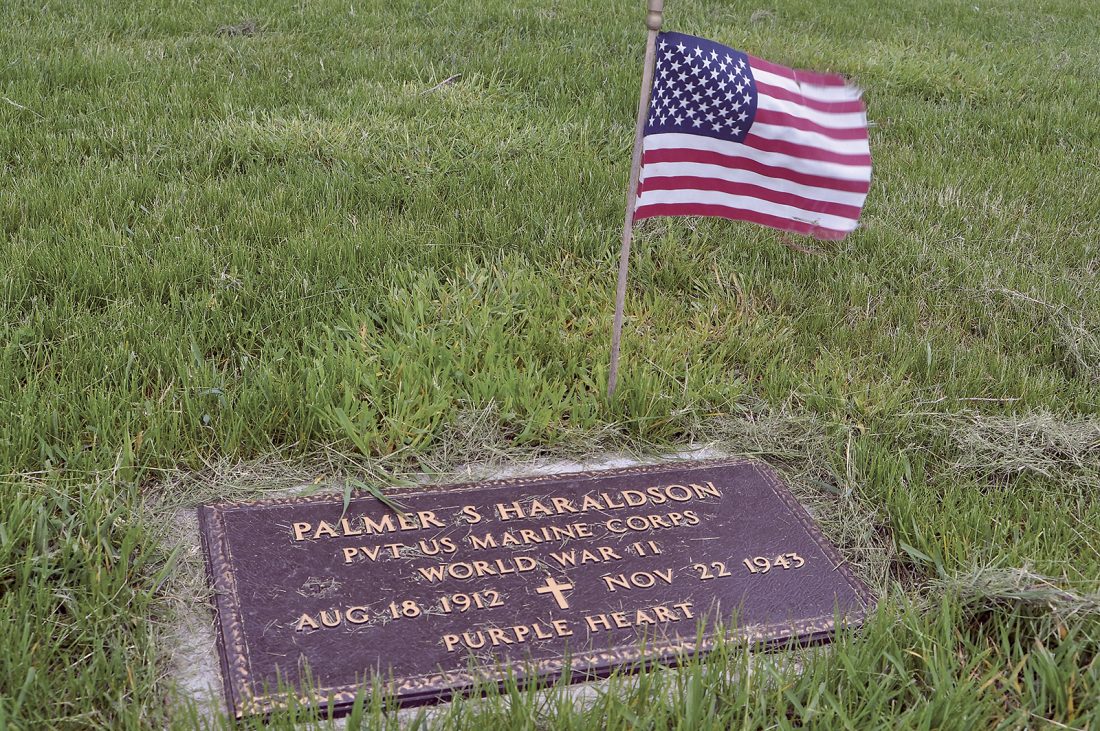 -Messenger photo by Bill Shea
Palmer Haraldson, a U.S. Marine who was killed in the World War II battle for Tarawa, an atoll in the Pacific Ocean, is buried in Memorial Park Cemetery in Fort Dodge. His body was returned to Fort Dodge in 2016.

He was killed during a ferocious battle for a Pacific Ocean island few Americans, then or now, had ever heard of. But some 72 years passed before he was returned to Webster County, where he grew up, to be buried alongside his parents and other relatives.

His remains were found and initially identified by History Flight Inc., a Marathon, Florida-based organization that helps to recover the fallen troops of the United States. The Department of Defense officially confirmed the identification.

He was buried in Memorial Park Cemetery on Fifth Avenue South with full military honors on June 22, 2016.

“Rest in peace, Uncle Palmer,” one of his nieces, Carolyn Moore Redding, of San Clemente, California, said during the funeral service.

Navy Cmdr. John R. Logan, a chaplain who participated in the service, described Haraldson as a “war hero who served God, country and Corps.”

Haraldson was born on Aug. 12, 1912, and grew up in Webster County. He later moved to California and eventually settled in Glendale, California. He met and married his wife, Patricia, in California. They didn’t have any children.

He enlisted in the Marine Corps in April 1943. He completed basic training in San Diego, California. After basic training, he completed specialized training as a sharpshooter. He was then sent to New Zealand, where he was assigned to Company C, 1st Battalion, 6th Marines, 2nd Marine Division. That unit was one of many assigned to invade Tarawa.

Tarawa is an atoll consisting of several small islands in the Pacific Ocean. During World War II, Japanese forces built an airfield on Tarawa’s biggest island, Betio.That airfield could be used to strike a wide area in the Pacific Ocean, so American military planners were determined to seize it.

Haraldson was killed on Nov. 22, 1943, while assaulting a Japanese stronghold on Betio.

History Flight Inc. began working on Betio in 2006. The group pinpointed a large burial site on the island in 2011 and began excavating it in 2015.

A pocketwatch bearing the initials PSH and USMC and a regiment number was found with one set of remains.

A check of military records showed that Haraldson was the only Marine in that regiment sent to Tarawa who had those initials.

Haraldson’s dental records were found and were used to help identify him.

In June 2015, Haraldson’s remains were taken to Joint Base Pearl Harbor-Hickam in Hawaii.

There, they were officially identified using DNA collected from a niece and a nephew.