Back where it belongs

-Messenger photo by Chad Thompson
Karla Detmering, left, her husband, Dennis Detmering, and Cierra Shivers, gather around a toy wagon that belonged the Detmering couple’s son, Ryan. Their son died at age 2, almost nine years ago. The wagon went missing last Saturday, but was found and returned the same day by Shivers. 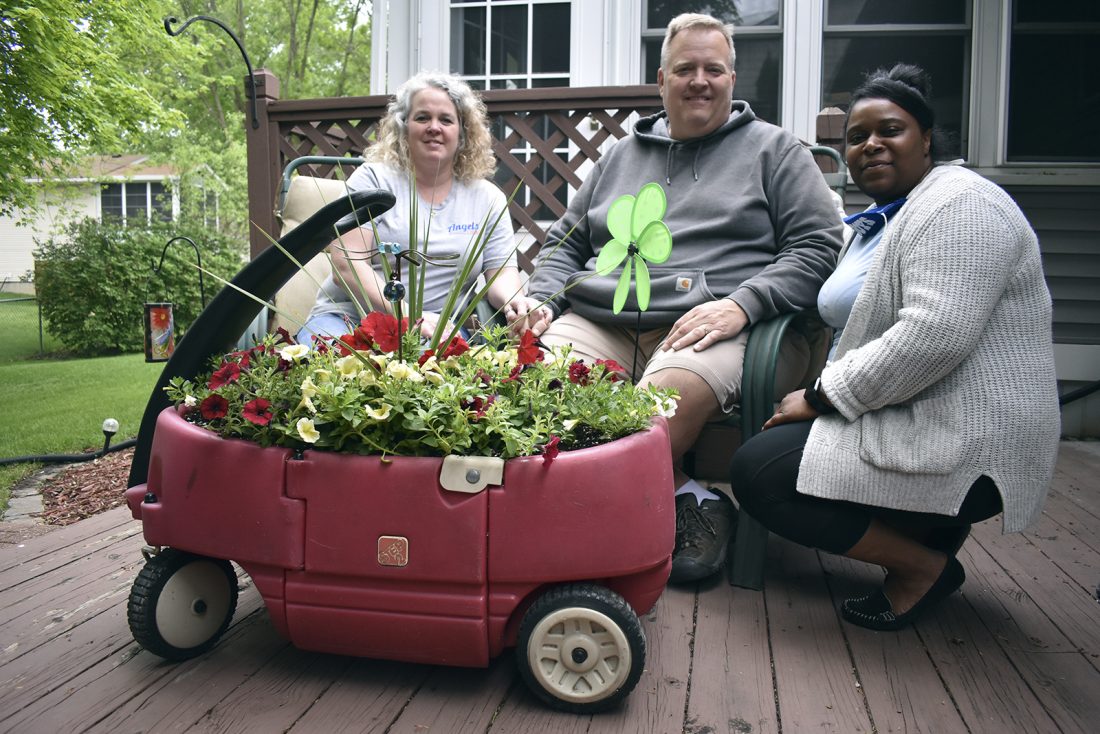 -Messenger photo by Chad Thompson
Karla Detmering, left, her husband, Dennis Detmering, and Cierra Shivers, gather around a toy wagon that belonged the Detmering couple’s son, Ryan. Their son died at age 2, almost nine years ago. The wagon went missing last Saturday, but was found and returned the same day by Shivers.

Dennis Detmering found himself in a nightmare scenario when he went to a Fort Dodge garden center last Saturday to see his son’s toy wagon.

The plastic red wagon, which holds sentimental value, had been stolen from one of the greenhouse buildings.

“I was angry at first,” Detmering said. “But I was more dumbfounded than anything.”

That wagon is one of the few things Detmering and his wife, Karla, have to remember their son by. Their son, Ryan, passed away at age 2, almost nine years ago.

The wagon was a gift to Ryan on his birthday, which is May 27.

And Dennis Detmering said every year around Ryan’s birthday, he and his wife fill it with flowers and keepsakes.

“It’s always on display at our house,” he said.

Even at his young age, Ryan’s smile and spirit inspired the family, Dennis Detmering said.

“He brought our family closer together,” he said. “We all bonded through him.”

“If you had a crappy day, once you came home from work, he would come up and hug you,” she said. “He always had a huge smile on his face. Just a sweet, happy little boy.”

She said losing the wagon added to the emotions she already feels, especially during the month of May.

“I was very upset since we had lost him and he had gotten it for his birthday,” she said. “I felt even sadder than I already usually am.”

So the Detmerings began searching for the lost wagon and made a post on social media alerting the public of what had happened.

“I thought I’d reach out to some of my friends on social media to see if we couldn’t find it and before the day was over we had almost 1,500 shares,” Dennis Detmering said. “In fact, I am still getting comments.”

Meanwhile, Cierra Shivers, of Fort Dodge, was walking out to her car that afternoon when she saw a toy wagon in her neighbor’s yard.

“It wasn’t eye-catching,” said Shivers, who lives in the northeast part of the city. “I just noticed the neighbors had a new wagon.”

At first she didn’t think anything of it.

“Then I saw the (social media) post,” Shivers said.

But she almost didn’t act on her instinct.

“I didn’t want to pry in other people’s business,” she said.

But as more time went by, that’s all she could think about was that red wagon.

When she did, the neighbor told her they had just bought it, adding that the wagon was full of flowers.

“That’s when my heart dropped,” Shivers said, realizing that the toy belonged to the Detmering family.

After explaining the situation to the neighbor, she agreed to let Shivers return the wagon to the Detmerings, who had just about given up hope.

“We were exhausted for the day,” Karla Detmering said. “We had been out looking for it. And then we got the message from Cierra that she found it — it was so exhilarating that we got it back because we figured it was lost. We just didn’t think we would get it back.”

The Detmerings provided the family who had the wagon with a Target gift card.

“It’s not the kids’ fault who were playing with it,” Detmering said. “You’re taking a toy from someone who had just gotten one.”

The wagon was returned about eight hours after it went missing.

When Shivers showed up with the wagon, the Detmerings were overjoyed.

“We haven’t hugged anyone and I hugged her,” Karla Detmering said, referring to the social distancing she’s been practicing during the COVID-19 pandemic. “She’s (Shivers) a guardian angel looking out for us.”

The wagon now sits in the Detmerings’ backyard with bright petunias sticking out of the top.

Shivers is glad she decided to take action.