-Messenger photo by Hans Madsen
Lilly Davis, 14, an eighth-grader at Fort Dodge Middle School, speaks during a restorative justice talking circle while holding the class’s talking stick. The students opted to use a reproduction of a human hip bone. 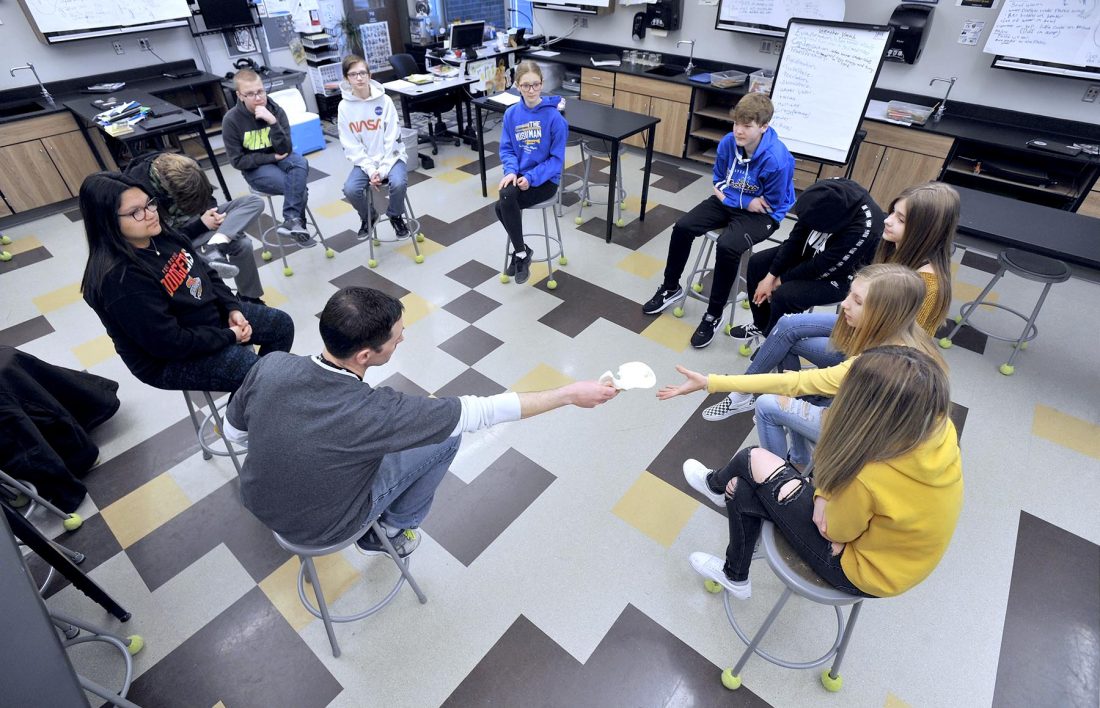 The staff at Fort Dodge Middle School started implementing a new system to address and resolve conflict within its walls.

The new system is called “restorative justice” and it focuses on conflict resolution that builds and restores relationships “by creating a sense of connectedness and belonging,” said Toni Cochrane, FDMS student success coordinator.

Rather than students just receiving consequences like detention, referrals or suspensions for bad behavior, FDMS staff, and students,work to identify and address the reason for the behavior.

“When I say ‘change the questions,’ it just means instead of talking at them, we are asking open-ended questions,” Cochrane said. “What is the problem? That’s kind of the hardest question to answer because a lot of behavior comes out, but we need to know what the problem is in order to make things right and to actually fix something and to move forward.”

When there’s a situation, whether it’s a student’s outburst in class or a student behaving aggressively or something else, instead of just handing down punishment, teachers use “community circles” to address the situation head-on. In those community circles, teachers ask questions like: 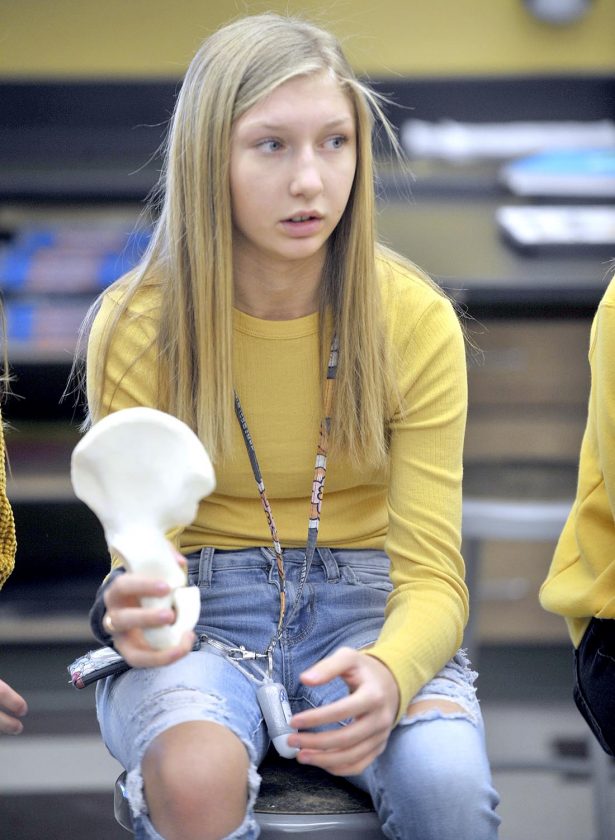 -Messenger photo by Hans Madsen
Lilly Davis, 14, an eighth-grader at Fort Dodge Middle School, speaks during a restorative justice talking circle while holding the class’s talking stick. The students opted to use a reproduction of a human hip bone.

What is the problem?

What are the effects of the problem, on the persons involved and the community as a whole?

What is it like when the problem does not exist?

What can I/we do to move from this being a problem to that more ideal place where the problem does not exist, reconciliation occurs and harmony returns to the community?

“The meat of restorative justice is asking the right questions,” Cochrane said. 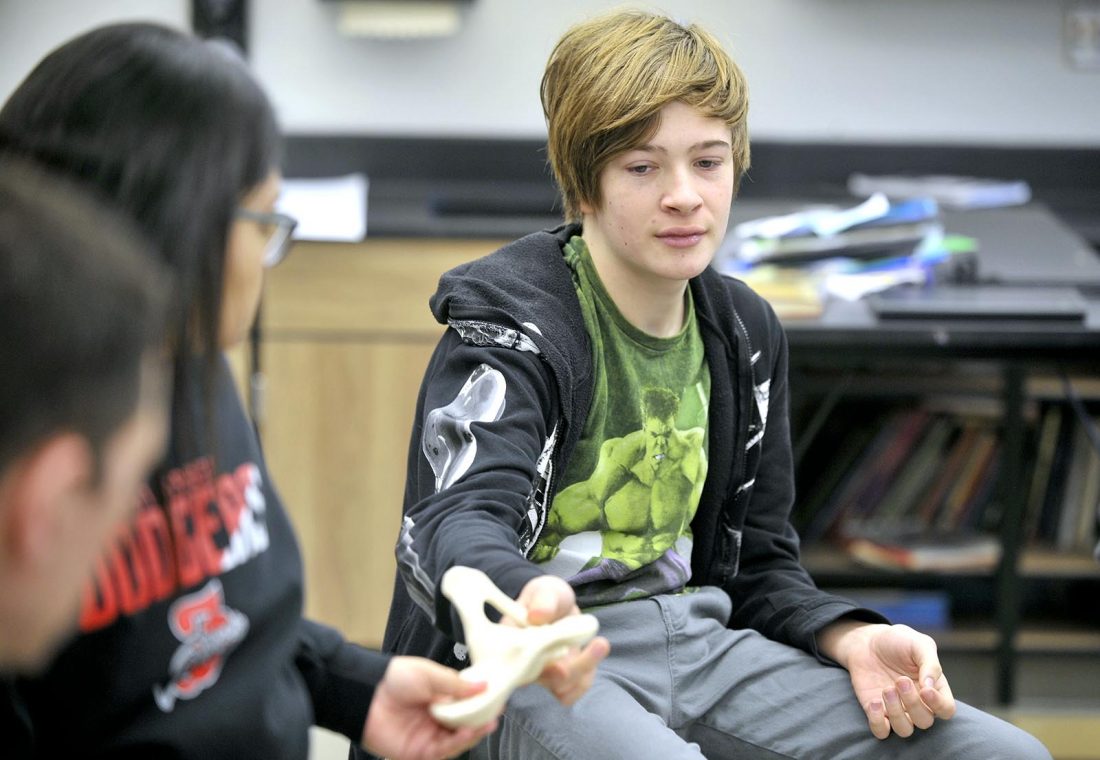 Having a systemic process to approach and handle conflicts in the school is helping students feel more supported in school and helping build relationships with their teachers and classmates, said FDMS Principal Aaron Davidson.

“It has been a big success so far,” he said. “We’re very excited to see where this is going to take us. It’s been a real positive practice.”

“Our goal as a school system is to make sure we’re building productive citizens … kids that graduate, go to college or jump in the workforce in Fort Dodge and are able to be successful in any type of environment,” Davidson explained. “This practice is helping us really help shape that.”

Davidson, who is in his first year leading FDMS, said at first, he wasn’t sure if the staff was going to “buy into” the restorative justice practices.

“It’s even tough for adults to be able to sit and talk and open up,” he said. “It just kind of gets people out of their comfort one at first. But they bought in right away. The feedback was phenomenal.”

“In the past, they maybe didn’t have the necessary tools or mediation to have a conversation where we solved that problem, but now that they’ve been exposed to it, instead of going out and responding aggressively to a situation, they seek out a staff member to have those conversations,” said Dennys Canto, student services liaison.

Cochrane remembered a situation she helped with during this school year where one student was directing racial slurs to two other students.

“The two girls came to me and wanted to talk this out with the person who had made the comments,” she said. “I wasn’t quite sure how this was going to go — we were pretty new at this — but I talked individually with each one and then when they came together, wow that was powerful.”

“It’s something that can be used when there’s a problem with students, but also with adults,” she said. “The climate and culture has changed to be more positive, reflective.”

The restorative justice approach not only helps prevent problems from escalating, it also gives students the opportunity to reflect on what they did and how it affected not only themselves, but the other students in the classroom. That reflection piece is key to preventing repetitive bad behaviors, the staff said.

In addition to doing community circles when a situation comes up, teachers and students practice them during Magic Hour every Monday and Friday.

“The teacher starts out with a question and then they go around the room,” said Ashley Canto, juvenile court liaison at FDMS. “They have a talking piece, so they each take a turn to answer the question. And now that we’re working through the year, the questions will get deeper and they’ll ask different things.”

At the beginning of the school year, teachers asked simpler questions to spark that conversation, like “Are you a night person or a day person?”

Just like everything else students do in the classroom, FDMS staff hope that these restorative justice practices are preparing each student for life after middle school and high school.

“I think the end goal is for them to be able to take the knowledge that they’ve gained in the classroom and carry that out into the real world and be able to apply that in the real world,” Dennys Canto said. 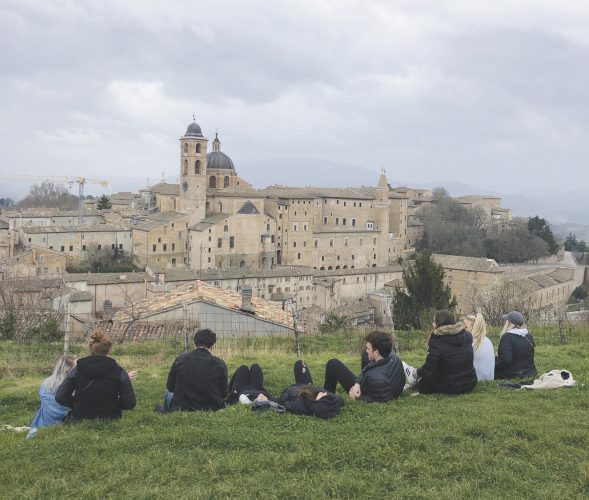 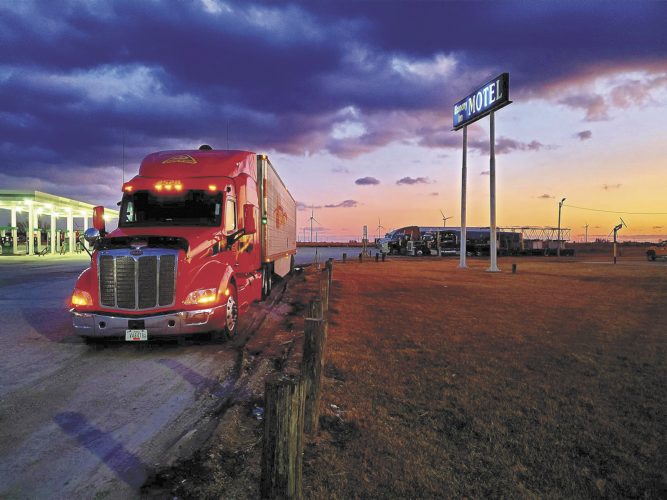 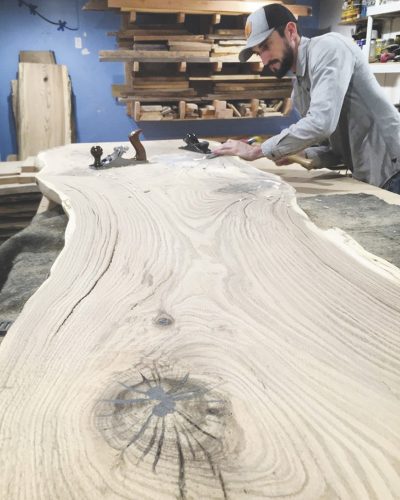