‘There needs to be money for treatment’

-Messenger photo by Hans Madsen
Ken Saunders, of Minnetonka, Minnesota, shakes hands with U.S. Sen. Amy Klobuchar, D-Minn., before posing for a selfie with her during a campaign stop at Iowa Central Community College. 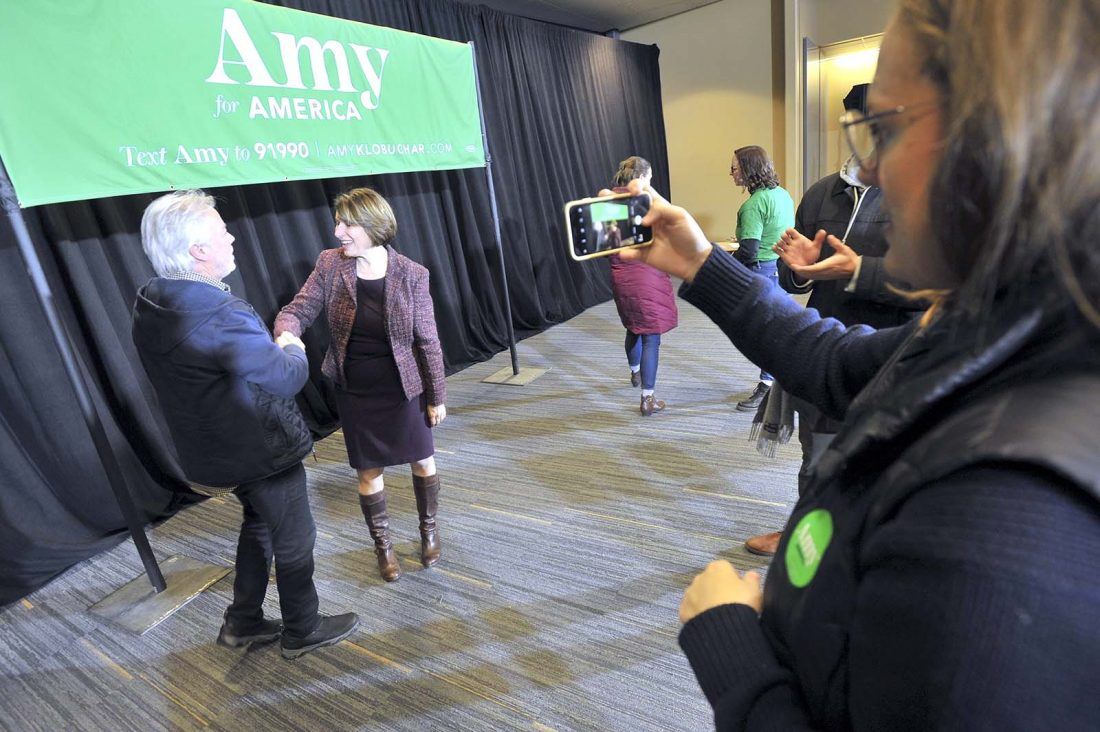 -Messenger photo by Hans Madsen
Ken Saunders, of Minnetonka, Minnesota, shakes hands with U.S. Sen. Amy Klobuchar, D-Minn., before posing for a selfie with her during a campaign stop at Iowa Central Community College.

U.S. Sen. Amy Klobuchar, D-Minn., described mental health as the “forgotten illness” in the state of Iowa during her speech Saturday in the Bioscience & Health Science Building on the main campus of Iowa Central Community College.

“You only have 64 public mental health care beds,” Klobuchar said to a crowd of about 75 people. “Sixty-four for the whole state.”

She added, “There are people waiting in a rural hospital getting no help at all because there may not be the right kind of doctor there.”

According to Klobuchar, suicide rates have spiked across the country.

There has been a 30 percent increase in suicides in the U.S. in the last 15 years, the Democratic presidential candidate said.

“A lot of it has been rural, veterans, farmers, students, LGBT community,” Klobuchar said. “That is what is going on and why I came on so strongly and first with a plan that covers mental health and addiction.”

According to Klobuchar, one in five people experience a mental illness sometime in their life.

As president, Klobuchar said she will launch new prevention and early intervention initiatives, expand access to treatment and address the lack of hospital services and treatment beds.

To help pay for her plan to address mental health, Klobuchar said she will place a 2 cent fee on each milligram of active opioid ingredient in a prescription pain pill. which will be paid by the manufacturer or importer.

She also said she will force opioid manufacturers to help fix the problems they created.

“My plan, which is paid for by money that will be a humongous settlement that we will have at the end with those pharmaceutical companies that got people hooked on opioids,” Klobuchar said. “My plan takes that money and uses it for opioid treatment and for other addiction — meth, crack cocaine, alcoholism, and that also includes mental health because that is the forgotten illness right now in the state of Iowa.”

According to her website, the former Hennepin County, Minnesota, attorney would “create by crafting a Master Settlement Agreement that provides money directly to the states for the cost of addiction treatment and social services.

“The plan will also be paid for by requiring hedge fund managers to pay their fair share of taxes on investment earnings and by ending pharmaceutical company tactics that prevent generic competitors from entering the market.”

The issue of mental health is personal for Klobuchar.

“For me it was my dad with alcoholism,” Klobuchar said. “He struggled with that his whole life. By the time John and I got married, he had three DWIs. They gave him a choice — treatment or jail. He chose treatment and it changed his life.”

Klobuchar said her father is doing well at the age of 91.

“And by the way, we just saw him in the assisted living,” Klobuchar said. “As he told me, a year and a half ago, the AA group still visits him and he said, ‘it’s hard to get a drink around here.'”

Klobuchar said everyone deserves the right to get the treatment they need.

“There needs to be money for treatment,” Klobuchar said.

It was Klobuchar’s third visit to Webster County during her campaign, which she launched in February 2019.

She’s hoping to gain support ahead of the Iowa Democratic caucuses on Feb. 3.

Barb Schlaefer and her friend, Katy Vermeer, traveled from the Twin Cities to see Klobuchar speak.

Each said they firmly support Klobuchar, who is the first woman elected to the U.S. Senate in Minnesota’s history.

“She can work with all kinds of people,” Schlaefer said.

“She’s been a strong senator and can work on both sides,” Vermeer said.

“I am leaning toward Mayor Pete,” Gubbels said.

Gubbels said Klobuchar has impressed him, though.

“I could still change my mind,” he said.